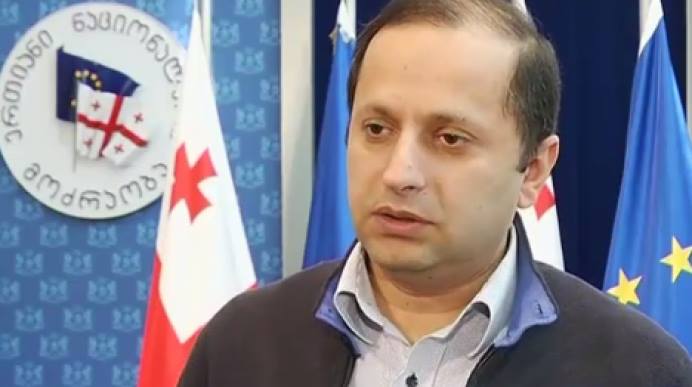 “The Tbilisi Railway Bypass project has virtually been suspended and brought to a standstill while a massive portion of the actual construction work, roughly 80%, had already been concluded.”

Criticising the new government’s economic policy at the plenary session of 18 September 2013, the

Criticising the new government’s economic policy at the plenary session of 18 September 2013, the MP from the United National Movement Zurab Melikishvili discussed suspended projects and stated: “Reasons explaining the shortfall in the budget can be numerous. I will focus solely on one major cause, however, which concerns suspended projects. We discontinue all those projects which bear strategic importance for our country such as the Tbilisi Railway Bypass project which has been suspended and brought to a standstill while a massive portion of the actual construction work, roughly 80%, had already been concluded.”

attempted to uncover the reasons which had prompted the suspension ofthe Tbilisi Railway Bypass project and tried to establish whether or not the aforementioned 80% of construction work had indeed been completed.

Prior to discussing the Bypass project in particular, it is to be noted that the MP’s statement concerning the suspension of various infrastructural projects is indeed consistent with the truth. This fact has been admitted by the government itself and the revision of different tenders due to certain shortcomingshas been specified as the reason for the suspensions. The Minister of Economy, Giorgi Kvirikashvili, explains the failed budget execution in 2013, among others, with the following factor: “As the GDP growth rates were lower than expected, the execution of some budgetary incomes failed. The infrastructural portfolio went through a profound revision as well.”

Nodar Khaduri also commented on the reduction of state-financed construction projects: “The only sector which was marked with a downturn this year was construction. The decline was observed, however, solely in the construction performed with the participation of the state.”

The Tbilisi Railway Bypass project is being implemented byJSCGeorgian Railway. The project and construction work are implemented by the joint enterprise of China Railway 23rd

In the month of September the President of Georgia and the Mayor of Tbilisi visited the construction site of the Tbilisi Railway Bypass project. They noted that the work on the railway had been suspended and found the fact of suspension to be utterly unacceptable, declaring that the project was of major importance to the country and, as such, should not have been arrested. In interviews to different media outlets, Mikheil Saakashvili confirmed that 80% of the project work had been completed and denounced the fact of the project’s discontinuation.

The Ministry of Economy of Georgia and JSC Georgian Railway both responded to the statements of the President and the Mayor stating that the project had numerous shortcomings and was suspended with the purpose of studying the failings and improving the project.

Aiming to explore the details of the issue, FactCheck

addressed JSC Georgian Railway and Tbilisi City Hall with an official letter (the letter to Tbilisi City Hall was addressed to the Mayor Gigi Ugulava). We asked the two bodies to provide information on the qualities of the Tbilisi Railway Bypass project. The letters sent to both bodies were identical and included the following questions:

The response from JSC Georgian Railway read that comprehensive information on the issues had been posted on the company’s website on 16 September and all answers to the above-listed questions could be found there. As for Tbilisi City Hall, the unit forwarded our letter to the Ministry of Economy of Georgia, entrusting them to respond to our questions.

On 16 September 2013, JSC Georgian Railway issued the following statement in response to the criticism voiced by Mikheil Saakashvili: “In accordance with the agreement, the contractor was obliged to have the construction workcompleted by 8 July 2013. This obligation has been violated. As for the circulating information regarding the possibility of the project being completed by the end of the year, this is not true in view of the fact that as early as in the beginning of 2012 the project supervisor/engineering consultants predicted a delay of six months and by the end of 2012 the delay was already increased to 18 months.”

The statement of JSC Georgian Railway also emphasises that in accordance with the construction norms and regulations of Georgia, projects are to be preceded by technical-economic justifications. Since no inquiry of a technical-economic nature was conducted prior to the kickoff of the Tbilisi Railway Bypass project, JSC Georgian Railway decided to purchase a similar kind of study from MC Mobility Consultants GmbH. This was the first attempt of making a technical-economic examination of the Tbilisi Railway Bypass project. (MC Mobility Consultants GmbH is an Austrian company providing consulting services in six different fields including transportation).

The research prepared by MC Mobility Consultants GmbH revealed the following unfavourable points of the project:

In addition to all the abovementioned, the indicated research of MC Mobility established that further investments would be required for the completion of the Bypass project: additional investments will be needed at the station in Mtskheta. Specifically, supplemental tracks are to be added to make the performance of certain train manoeuvres possible. (The full version of the conclusion prepared by MC Mobility Consultants GmbH can be found here).

As for the suspension of the project, JSC Georgian Railway declares that research is currently being carried out exploring possible improvements of technical parameters based upon which the Georgian Government will make the final decision on the Tbilisi Railway Bypass project. As can be seen, JSC Georgian Railway cannot provide a definite answer on whether or not the project will be completed nor could an assertive response be attained from the Government.

from the Ministry of Economy.

Railway construction specialists have certain questions regarding the project as well. They take a positive note of the project idea itself but also emphasise the uncovered faults and stress the need of their improvement. The criticism of the project is also kindled by ecological factors due to the railway’s proximity to drinking water reservoirs. The specialists deem such execution of the project risky as in the case of a train wreck spilling harmful materials into the reservoirs, this could leave part of Tbilisi dwellers without drinking water.

The project verily contains various flaws and in addition to that the maintenance of the new railway costs significantly more than that of the existing one. On the other hand, diverting the track and relocating the central railway station vacates a sizable territory in thecentre of the city which may attract investors and provide for the development of the district. The latter circumstances could overshadow the costs caused by the relocation of the railway and prove to be more beneficial to the city. This is the very argument made by Tbilisi’sMayor while advocating for the positive aspects of the project.

The above-listed favourable factors are outlined in the research

of Transparency International (TI) as well. Discussing the opposing arguments regarding the Tbilisi Railway Bypass project, TI publishes the statement of Akaki Jokhadze, Head of Transport at Tbilisi City Hall, saying that relocating the railway station from the city centre will notably diminish the problem of traffic jams in the city.

In May 2013 Ernst and Young, an international consulting company, conductedresearch at the request of JSC Georgian Railway which estimated the area of the territory to be vacated after the relocation and assessed the price for its privatisation. According to the research, the emptied territory spreads out over 74 hectares with an estimated market value of USD 30 million which is significantly less than the costs required for building the Railway Bypass. The results of this research are disputed by Akaki Jokhadze asserting that the land released will cover 150 hectares and, therefore, its market value will be much bigger as well. (Source: Transparency International-Georgia). Conclusion FactCheck’s

inquiry about the accuracy of Zurab Melikishvili’s statement revealed that the share of completed work on the Tbilisi Railway Bypass project amounts to 60% and not 80% (USD 213 million have been spent) as claimed by the MP. At present, the project is arrested and its future prospects are very dubious. Even though Prime Minister Bidzina Ivanishvili called the project useless, the Minister of Economy maintains that the final decision has still not been reached. The project was suspended due to uncovered faults and its future will be known after proper checks and examinations have been conducted. At this stage the government fails to make a definite statement on whether or not the construction will be completed. Correspondingly, this part of the MP’s statement is accurate as the future development of the project indeed remains vague.

The Tbilisi Railway Bypass project definitely has a number of positive aspects. Its successful completion will release a sizable territory in the city centre creating profitable space for investments. Additionally, it will provide for the resolution of problems related to traffic jams and the reduction of environmental pollution. The cost of the Tbilisi Railway Bypass project amounts to GEL 213 million which means that the suspension of the project will make these expenditures go to waste.

As stated in the report published by JSC Georgian Railway, however, the Tbilisi Railway Bypass project includes numerous flaws as well. JSC Georgian Railway and the Georgian Government declare that the project was arrested precisely for the improvements of these shortcomings.

As a result of our inquiry, we can assert that the facts indicated by the MP are nearly consistent with the truth (excluding the miscalculation of percentages). He also justly claims that the suspension of such infrastructural projects is harmful to the Georgian economy. Discussing the specifics of the Bypass project, the MP mentions no specific shortcomings of the project. The pathos ensuing from this overlooking of project flaws is misleading and, therefore, we rate Zurab Melikishvili statement: “The Tbilisi Railway Bypass project has virtually been suspended and brought to a standstill while a massive portion of the actual construction work, roughly 80%, had already been concluded,”as HALF TRUE.