“The government is taking internal debts of unprecedented magnitude and with high interest rates which will be hard to repay afterwards.”

Delivering a speech at the plenary session of the Parliament on 30 October 2013, representative of

Delivering a speech at the plenary session of the Parliament on 30 October 2013, representative of the Minority Giorgi Vashadze discussed the country’s economic problems. He took note of the expected increase in the rates of unemployment, a shortfall of GEL 600 million in state budget revenues and the suspended growth of pensions in the draft budget of 2014. He also noted that in 2014 “the government is taking internal debts of unprecedented magnitude and with high interest rates which will be hard to repay afterwards.” The MP finds it alarming that the government plans to allocate these sums for the funding of social projects.

examined the draft budget of 2014 to verify whether or not the government indeed intends to take internal debts “of unprecedented magnitude and with high interest rates.”

denominated state securities issued by the Ministry of Finance of Georgia” with a maturity of either six months, one year, two years or ten years. 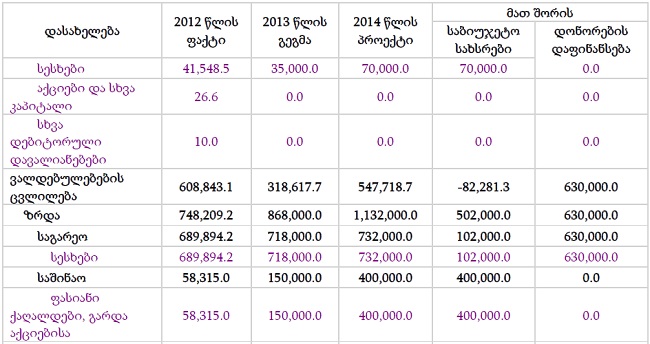 As gathered from the graph, the draft budget of 2014 foresees an increase of internal liabilities (Treasury bills and bonds) by GEL 400 million. The extent of the increase exceeds the indicator of 2013 by GEL 250 million and the indicator of 2012 – by GEL 342 million. Evidently, the size of the government debt projected for 2014 considerably exceeds that of the previous two years. The draft budget of Georgia of 2014 envisages the upper limit for the state debt, setting it at GEL 9,977.1 million for until the end of 2014. This figure includes the loans envisaged by the draft budget of 2014 as well as the accumulated unpaid debts of previous years. Of the said GEL 9,977.1 million, the share of state external debt amounts to GEL 7,592.9 million while the share of internal debt totals GEL 2,384.2 million. As in 2014 the government intends to take an internal debt of GEL 400 million, it can be deduced that the remaining GEL 1,984.2 million (2,384.2 - 400 = 1,984.2) constitute accumulated unpaid debts of previous years. As for the interest rates of the loans, the draft budget of 2014 reveals no information regarding the matter.

Aiming to obtain additional information on the issue, we contacted the corresponding department of the Ministry of Finance as well as Giorgi Vashadze himself. Nino Shanshiashvili, the Deputy Head of the Public Debt and External Financing Department of the Ministry of Finance, reports that Treasury bills and bonds were being issued in the period between 1997 and 2005 and continue to be issued since 2009. According to her, these liabilities have been annulled; that is to say, repaid in 2004-2005 and renewed in 2009. The government has issued no Treasury bills or bonds throughout 2006, 2007 and 2008. In 2009 internal liabilities saw an increase of GEL 260 million, in 2010 – GEL 172 million while in 2011 the internal liabilities rose by GEL 91 million. As can be concluded from the above-given data, the amount of debt to be taken by the government in 2014 exceeds those of all years since 2009. A spokesperson of the Ministry of Finance confirms that the government has never issued Treasury bills and bonds of a greater value than GEL 400 million. In terms of interest rates, we were informed that they are still not known as the interest rates will be defined by means of an auction after the budget is approved.

Normally, interest rates are preliminarily calculated based upon the existing weighted average rate. According to Nino Shanshiashvili, as of October, the weighted average rate on all types of outstanding securities amounts to 7.8%. It is hard to determine, however, how this rate will change in the future. The number of Treasury bills or bonds to be issued with the said total value of 400 million is also unknown as is the way in which the securities will be distributed based upon maturity. The spokesperson of the Ministry of Finance noted, however, that the Ministry plans to issue securities with a maturity of one, two, five and ten years. With regard to the weighted average interest rate Giorgi Vashadze asserted that 7.8% is already too high for a debt of GEL 400 million but the MP sees no possibility of a decrease of the percentage. " The state needs funds and no one will buy Treasury bonds with low interest rates,” stated Vashadze. Despite the fact that there can be no certainty about the future interest rates at this point, the above-given statement of the MP seems fairly reasonable. Undoubtedly, the government needs funds and in 2014 it intends to take an unprecedentedly large domestic debt – GEL 400 million.

In order to ascertain how big the weighted average interest rate of 7.8% actually is, we further examine the data from previous years.

As can be inferred from the table, only six-month and one-year Treasury bills and bonds have been issued by the government in 2009. The table also demonstrates that the number of securities was increasing every year. Starting from 2012, Treasury bills and bonds with a maturity of six months have been abolished; this has also been confirmed by the spokesperson of the Ministry as well. The table shows that the weighted average interest rates for almost all types of state securities in 2010, 2011 and 2012 were quite high, surpassing 7.8%. Therefore, although the current interest rate of 7.8% is not alarmingly high as compared to those of previous years, it is still considerably high for the debt in the amount of GEL 400 million.

The representative of the Parliamentary Minority Giorgi Vashadze claims that in 2014 the government is taking unprecedentedly large debts with high interest rates whose discharge will prove extremely burdensome in the future.

Our research revealed that the domestic debt projected in the plan of 2014 amounted to GEL 400 million. This volume of the debt is indeed unprecedented in previous years. As for the interest rate, it still cannot be established with certainty and will be defined based upon the auction after the budget is approved. The weighted average interest rate will also depend upon the number of issued Treasury bonds and bills by the government as interest rates vary according to the maturity of state securities. Interest rates can be roughly calculated based upon the existing weighted average rate which amounts to 7.8% by October of 2013. The rate of 7.8% by itself does not represent a high percentage as compared to weighted interest rates of previous years but for a debt of GEL 400 million it is quite high.

Based upon all the abovementioned, we conclude that Giorgi Vashadze’s statement:  “The government is taking internal debts of unprecedented magnitude and with high interest rates which will be hard to repay afterwards,” is MOSTLY TRUE.