On 19 November 2013, the government member candidates met with the Parliamentary Minority and

On 19 November 2013, the government member candidates met with the Parliamentary Minority and presented their governmental programme. At the meeting, the Acting Minister of Finance (Nodar Khaduri occupied the post of the Minister of Finance throughout the last year, after the President’s inauguration, however, the authority of the government had been terminated and the Parliament was to approve the new composition) Nodar Khaduri made the following statement with regard to the number of people employed in the business sector:  “The number of employed grew by eight thousand in the second quarter of the current year relative to the first; furthermore, in the first quarter of this year growth had amounted to 15 thousand as compared to the first quarter of the last year.”

inquired about the accuracy of the mentioned facts.

In the second quarter 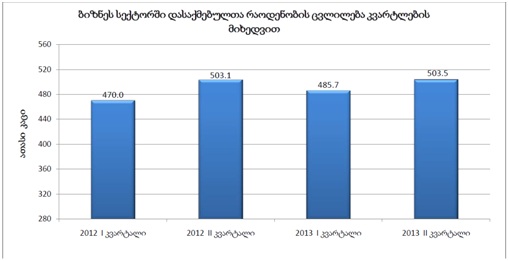 The aforementioned inaccuracy will not affect the final ruling of FactCheck

in as much as no other logical explanation can be found for the Acting Minister’s diminishing the growth in the number of employed but an unwilling mistake. This part of Nodar Khaduri’s statement includes another “controversy,” however, which demands more consideration. In calculations of the number of employed GeoStat has no methodology for counterbalancing the effect of the seasonal factor. For this reason, comparison of any specific quarter with the one preceding it produces unreliable data and valid results can be obtained only by comparing parallel quarters of different years. The Ministry maintains that seasonal adjustments are of great importance as different quarters have inherently diverging specifications in terms of employment. The first quarter renders the lowest results in this regard and the indices from every next quarter of the year generally exceed those from the previous one; accordingly, the highest indicators are witnessed in the fourth quarter.

Nodar Khaduri himself described the above-given proper comparison methodology as the only feasible method of comparison in Georgia and severely criticised those comparing the data of the neighbouring quarters. He openly declared his position on the matter stating that only parallel quarters could be compared for analytical purposes. This posture of Nodar Khaduri has been discussed in a previous article of FactCheck

as well but in this case he seems to have changed the position as he measures the data of the second quarter of 2013 against the first instead of the same quarter of the previous year.

Weighing the data of the second quarter of 2013 against the data of the same period of the preceding year (see the graph above), we observe only a small increase in the number of employed (400 persons). It is to be added that the employment statistics for the third quarter will be published by the beginning of December. We will keep a close watch on the situation of employment and return to this matter in the future.

Nodar Khaduri justly claims that in the first quarter of 2013 the number of employed in the business sector has grown by 15,700 as compared to the same period of the last year.

The comparison of the second quarter of 2013 with the first reveals an even greater growth than indicated by Khaduri but the measuring of any specific quarter against the one preceding it delivers deceptive data and accurate conclusions can be drawn only by comparing parallel quarters of different years. This recommended methodology of comparison shows an increase of only 400 in the second quarter of 2013.

As noted above, discussing the matters of employment several months ago, the Minister of Finance strongly protested against the comparison of neighbouring quarters whereas in his speech of 19 November he himself used the method for which he previously had criticised his opponents.

As outlined above, Nodar Khaduri presented accurate growth rates for the first quarter, as the rates were fairly high, but discussing the second quarter he might have shied away from mentioning the moderate growth of 400 persons (established by correct comparison) and gave preference to greater numbers instead. This circumstance instils a doubt that he deliberately chose to make the inaccurate analysis avoiding to create an impression that the growth rates of employment were faltering. Consequently, we conclude that Nodar Khaduri’s statement:  “The number of employed grew by eight thousand in the second quarter of the current year relative to the first; furthermore, in the first quarter of this year growth had amounted to 15 thousand as compared to the first quarter of the last year,” is HALF TRUE.