Presenting the government programme to the Parliament on 19 November 2013, candidate for Georgia’s

Presenting the government programme to the Parliament on 19 November 2013, candidate for Georgia’s Prime Minister (later Prime Minister), Irakli Gharibashvili, discussed the economic situation of the country. He asserted that the Georgian Dream government had inherited a difficult economic situation. Problems still persist but the economy is notably recovering. Aiming to present verification of positive tendencies in the economy, Gharibashvili offered the following arguments: “Right after the new government took office, business was relieved of state oppression and the government’s pressure on business was stopped. Starting from March of the current year a tendency of increase is observed in the economy. The economy is recovering from shock and an irreversible, coherent and steady process of rehabilitation has been started. Despite the problems accumulated in the construction sector during the previous government, in two quarters of the current year private apartment construction saw an increase of 10% which indicates that development of this sector is feasible even without the government’s financing of unjustifiable projects. Owing to the new government’s large investments in the agricultural field, in two quarters the net growth of this sector surpassed 7%. In the first half of 2012 the agricultural field saw a decline... In nine months of this year an increase in exports amounted to 14% relative to the same period of the last year. In comparison to the last year, trade deficit was reduced by 20%. In the first half of 2013, the number of employed in the business sector grew by 8,024 people in comparison to the first half of 2012. In every month of 2013, the Real GDP indicator is higher than in the previous year so we have positive economic growth. The volume of loans granted to the private sector grew by 12% in comparison to the same period of 2012 and interest rates saw a significant decrease.”

inquired whether or not the tendency observed in the economy since March has indeed been one of an increase.

In line with the data of GeoStat, in two quarters of 2013 the construction sector saw a decrease of 13% (relative to the same period of the preceding year) and not an increase of 10% as claimed by the candidate (see table below).

As gathered from the data of GeoStat, in the first quarter of 2013, GDP at constant prices in the agricultural sector amounted to GEL 312.9 million while in the second quarter the indicator was at GEL 392 million. The sum of the indicators for the two quarters of the current year totals GEL 704.8 million.

In the first quarter of 2012, GDP at constant prices in the field of agriculture amounted to GEL 287.2 million and in the second quarter – GEL 361.4 million. The sum of the two quarters of the past year equalled GEL 648.6 million which falls behind the indicator of the current year by 8.7%.

The negative trade balance of Georgia equalled USD 3,548 million this year and relative to the indicator of the last year (USD 4,056 million) saw a decrease of 12%. 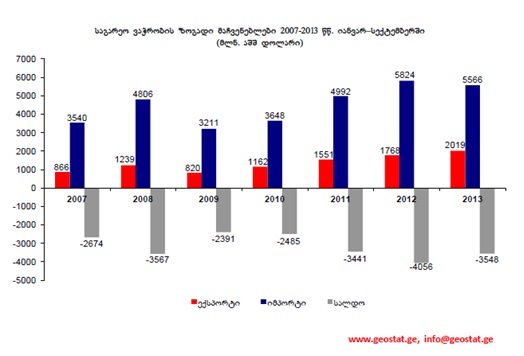 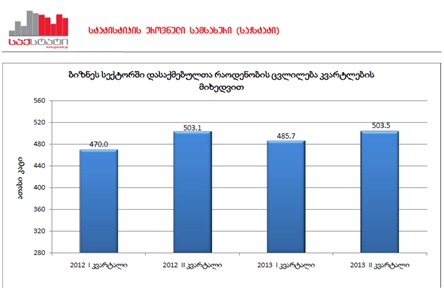 It is to be noted that in the third quarter of the current year the number of employed dropped by 9,200 as compared to the same period of the last year. This indicator could not have been known to Irakli Gharibashvili, however, as he made the statement on 19 November while the indicated data was published on 4 December. This notwithstanding, this statistical data demonstrates that the business sector shows no signs of a positive tendency.

Evaluating the progress in GDP indicators, Irakli Gharibashvili notes that in every month of 2013 GDP indicators were higher than in the last year. It is safe to say that in this assertion the Prime Minister is misled, as in June GDP saw a decline of 0.6%. Even though no negative rates were observed in other months of 2013 and, overall, GDP is still growing (therefore average monthly indicators exceed those of the last year), its growth rates marked a significant decline. Discussing GDP indicators, the Prime Minister nearly correctly indicates the facts but overlooks such an important context as a decline in the GDP growth rate (the rate is lower than the one projected and the one observed in the previous year) which provided for a shortfall in the revenues of the state budget of 2013. According to the data of the first ten months of 2013, real growth of GDP amounted to 1.9% (the economic growth of 2013 is projected to be around 2-2.5%) while throughout the last three years the Georgian economy was growing with the rates of 6-7% (see the graph below). It can be said that the negligence of this circumstance inhibits the full understanding of the issue and ensues a false interpretation of facts. 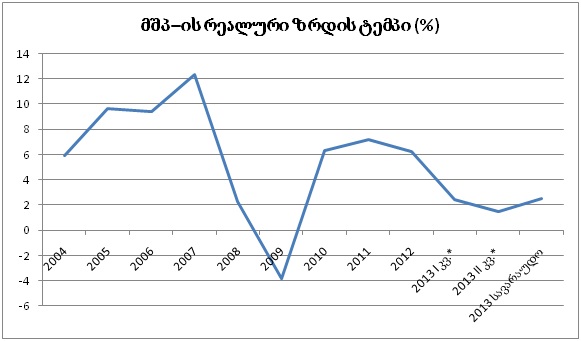 Loans Issued to the Private Sector and Interest Rates

According to the data of the first nine months of 2012, the average interest rate on granted loans equalled 19.1% whereas in the same period of 2013 this indicator was at 17.9%.

Our inquiry about the accuracy of Irakli Gharibashvili’s statement revealed the following circumstances. The private construction sector saw a decrease of 13% instead of a growth and, therefore, this part of the statement is incorrect. In the first six months of 2013 an increase of 8.7% is indeed observed in the agricultural sector. The Prime Minister also correctly indicates the fact that the indicators of the agricultural sector in the first half of 2012 were represented by negative figures. Gharibashvili accurately indicates the growth rate of exports but fails to make a correct assessment about the negative trade balance of the country; that is, the trade balance was reduced by 12% and not 20%. The Prime Minister’s statement with regard to the growth in the number of individuals employed in the business sector is accurate and in the first six months of this year (relative to the same period of 2012) this figure shows an increase of 8,050. The data of the third quarter, however, demonstrates a decrease in the number of employed. (Irakli Gharibashvili could not have been aware of this fact as the said statistical data was published 15 days after his speech). As for the statement made concerning GDP, it proves to be inaccurate as in June of the current year the growth rate of GDP was expressed with a negative figure. Indicators of all other months were represented by positive figures but this part of Irakli Gharibashvili’s statement still cannot be considered truthful as it neglects such an important circumstance as a sharp decline in GDP growth rates. The Prime Minister correctly indicates statistics on the increase in the volume of loans issued to the private sector. The amount of loans given out in the first nine months of this year surpasses the indicator of the last year by 11.6%. It is also accurate that interest rates on private loans are lower this year than they were in the last year.

It is also worthwhile noting that the improved situation in particular sectors still does not provide a foundation for claiming that the state economy is incontrovertibly increasing. Problems are substantial and they are manifested in the abovementioned decrease in GDP growth rates. Apart from this, problems are observed in terms of the budget fulfilment and its shortfall in revenues roughly amounts to GEL 750 million. Additionally, in the first nine months of 2013, the total sum of overdue loans issued to the private sector saw an increase of 20% relative to the same period of 2012. This percentage significantly exceeds the growth rate of loans witnessed in the same period (11.6%) and, therefore, undermines the premise of the private sector’s improved situation. Furthermore, in the first half of 2013, internal savings of the economy showed a decrease of 15.9% in comparison to the same period of the past year. Savings represent a precondition for the future economic growth. Current savings will turn into investments in the following year and provide for an increase in the economic activity. Accordingly, even though consumption has not dropped in 2013, a drop in the savings gives no reason for optimistic views.

Considering the facts outlined in the article, we conclude that Irakli Gharibashvili’s statement regarding the tendency of an increase in the Georgian economy and the steadiness and irreversibility of the process, is MOSTLY FALSE.