“Several months ago, 113 kilograms of heroin were seized while during the previous government, police seized only a few grams throughout the year. Everyone knew that seven tons of pure heroin were transmitted from Georgian ports by ferryboats; these are t

On 27 November 2013, at the plenary session of the Georgian Parliament, member of the Parliamentary

On 27 November 2013, at the plenary session of the Georgian Parliament, member of the Parliamentary Majority, Giorgi Gachechiladze, declared:  “I want to speak about one more important achievement of the Ministry of Internal Affairs concerning the seizure of heroin. The Greens Party of Georgia started to fight against this in 2009. Today, a very good thing is happening:  the international Afghan drug cartel created by the United National Movement is closed. Several months ago, 113 kilograms of heroin were seized while during the previous government, police seized only a few grams throughout the year. Everyone knew that seven tons of pure heroin were transmitted from Georgian ports by ferryboats; these are the data of the UN and the USA.”

took interest in the abovementioned statement and decided to investigate its truthfulness.

Firstly, we became acquainted with the data of the UN and the USA. The State Department of the United States of America publishes reports on the strategy of international drug control annually; the reports reflect the respective data of the previous year.

The 2009 report highlights that in December 2008, 375 kilograms of heroin were seized in the Bulgarian port city of Burgas after arriving from the Georgian port of Poti.

The 2011 report discusses the situation in Georgia in more details and is far more critical as compared to the previous years. It mentions that apart from the small-scale production of ATS, Georgia produces no narcotic drugs. However, because of its location bridging Asia and Europe, Georgia is becoming a major transit corridor for drugs of abuse produced elsewhere.

One major drug route runs from Afghanistan and Iran through Azerbaijan and on to Western Europe and Russia. Drugs also transit through Georgia to Western Europe from Greece and Turkey. According to the report, the suspected route involves long-haul TIR trucks. There is a speculation in the report that drugs flow through the separatist territories of South Ossetia and Abkhazia.

The report also mentions that European law enforcements seized from seven to eight tons of drugs from trucks crossing Georgian territory in 2009.

Several reasons are named to explain the size of the drugs transit in Georgia:  the mechanisms preventing the drug transit control including the rule according to which the customs officer can inspect the transit vehicle only if the cargo owner or his/her representative attends the inspection procedure thereby limiting the possibility to inspect the transit vehicles, the lack of coordination between anti-drug agencies and the risks caused by the visa-free regime with Iran as approximately 40% of Afghan drugs go to Iran. The report also indicates that there are certain shortcomings in the Georgian legislation and it does not correspond to the 1988 United Nations Drug Convention (Georgia has been a party to this Convention since 1998).

The 2012 and 2013 reports of the US State Department are similar to the 2011 report and discuss the same problems and reasons. Georgia is also represented as a transit country; however, there are no statistics of 2011 in respect to seizing the drugs. These reports display the indicator of the seizure of drugs from 2005 until September 2010; according to the reports, these data are provided by the Ministry of Internal Affairs of Georgia.

As for the UN data, a special structure of the UN in the form of the United Nations Office on Drugs and Crime (

UNODC) works on this issue and publishes annual reports. 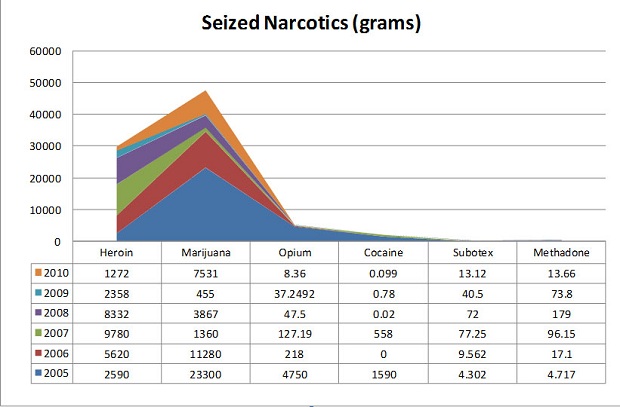 According to the UNODC report of 2010, six tons of heroin entered Europe (Bulgaria) from Georgia through the Black Sea and a relatively small amount, one ton, entered Ukraine (see the chart below). 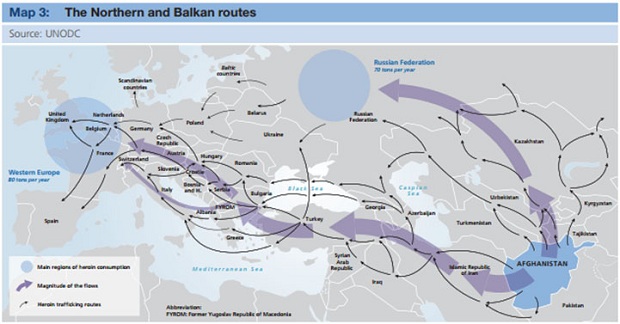 As for the data of the Ministry of Internal Affairs of Georgia, the statement dated 4 July 2013 reports:  “As a result of vehicle search conducted by means of special equipment, an especially large amount of drugs were detected in a special cache installed on the body of a vehicle containing the heroin drug packed in 500 gram packages whose number amounted to 232 with a total weight of 116 kg (worth several million USD).” According to the abovementioned statement, as a result of the operative-searching and investigative activities, the officers of the Central Criminal Police Department of the Ministry of Internal Affairs detained Moldovan and Turkish citizens on the territory of Akhaltsikhe. According to the details of the investigation, the abovementioned individuals crossed the Georgian state border on 3 July through the Ninotsminda customs point. The Turkish citizen illegally smuggled 116 kg of heroin worth tens of millions of USD in Georgia, aimed for international transit.

On 22 November we addressed the Ministry of Internal Affairs in written form; however, we have not received any response so far. According to the data of the UN and the USA, Georgia is regarded as a drug transit country. In 2005-2010, law enforcements seized more than one kilogram of drugs annually; e.g., in 2007 the Ministry of Internal Affairs seized about 9.7 kilograms of heroin. Giorgi Gachechiladze does not give precise information when saying that the previous government used to seize a few grams of drugs per year. Nevertheless, Gachechiladze’s statement that 113 kilograms of heroin were seized in 2013 (116 kilograms according to the official data) is true.

Based upon the facts analysed in the current article, we can assume that Gachechiladze mainly gives precise information but, at the same time, he declares that the previous government made Georgia a drug transit country. Naturally, this accusation is not confirmed by any arguments. Not a single case has been filed against the members of the former government in this respect nor do the reports of the UN and the USA provide any information in this regard. Therefore, FactCheck cannot investigate the grounds for this accusation. At the same time, it is less likely that the MP could confirm it as well. Therefore, Giorgi Gachechiladze’s statement:  “Today, a very good thing is happening:  the international Afghan drug cartel created by the United National Movement is closed. Several months ago, 113 kilograms of heroin were seized while during the previous government, police seized only a few grams throughout the year. Everyone knew that seven tons of pure heroin were transmitted from Georgian ports by ferryboats; these are the data of the UN and the USA,” is HALF TRUE.