“Notwithstanding the fact that the rate of economic growth declined in 2013, around 30 thousand additional jobs have been created in the first three quarters of the year which means that unemployment is decreasing.”

On 13 January 2013, the Minister of Finance, Nodar Khaduri, made the following statement on the

On 13 January 2013, the Minister of Finance, Nodar Khaduri, made the following statement on the matter of employment: “Notwithstanding the fact that the rate of economic growth declined in 2013, around 30 thousand additional jobs have been created in the first three quarters of the year which means that unemployment is decreasing. Therefore, the voiced forecasts about the rise of unemployment are simply irresponsible.”

inquired about the accuracy of Nodar Khaduri’s statement.

In all like lihood, when discussing the employment rate, Nodar Khaduri was referring to the statistical data on persons employed in the business sector. In order to conduct an accurate analysis of the matter and comply with the relevant methodology of GeoStat, we need to analyse the data of 2012 along with that of 2013. Since the National Statistics Office of Georgia holds no mechanism for making seasonal adjustments to the data, the comparison of any particular quarter to the one preceding it gives unreliable results and makes way for inaccurate interpretations. Therefore, any given quarter should be compared solely to the corresponding quarter of another year. The Office informs that the seasonal peculiarities represent an important factorin the analysis of unemployment rates as different quarters tend to show significantly diverging results. The first quarter presents the lowest results in terms of employment. In the majority of cases the employment rate of the next quarter exceeds that of the previous one. Accordingly, the highest rate of employment is witnessed in the fourth quarter of a year. 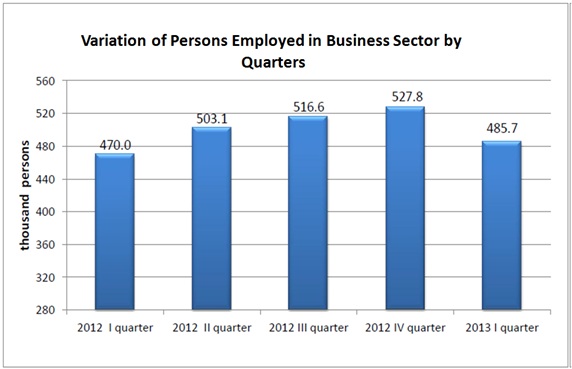 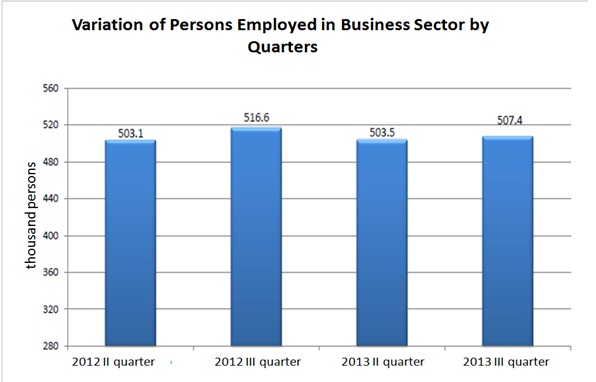 In our research we also allowed for the possibility that Nodar Khaduri employed the wrong methodology of comparison and measured the data of the third quarter of 2013 against the data of the first quarter of the same year. In this case the number of employed in the third quarter (as compared to the first) sees a growth of 21,700. The figure calculated through this sort of comparison (21,700) comes closer to the figure indicated by the Minister of Finance (30,000). As we mentioned before, however, a comparison such as this is misleading.

It is also to be noted that this method of comparison has been severely criticised by Nodar Khaduri himself just a couple of months ago when he maintained that any given quarter could only be compared to the corresponding quarter of the previous year. His position on this very matter has been discussed previously in one of our articles.

Apparently, however, Khaduri took a slightly different course in the present case and compared the number of employed in the third quarter of 2013 to the figure of the first quarter.

Employing the methodology recommended by GeoStat we established that in the first three quarters of 2013 the number of employed grew by 2,300 as compared to the same period of 2012. The Minister of Finance, however, points to a growth of 30 thousand. We presumed that the Minister was comparing the third and first quarters of 2013 but we also emphasised that this methodology is untrustworthy as it does not take into account the seasonal characteristics. It is safe to say that the growth observed between the first and third quarters (21,700) is primarily induced by the routine seasonal variations. As noted above, the number of employed at the beginning of the year, as a rule, falls behind the indicators of the following quarters. Therefore, the Minister’s pathos implying that the increase in the number of employed observed between the first and third quarters of 2013 represents a manifestation of a significant improvement in this sector is false. It is also to be noted that as recently as a couple of months ago, Nodar Khaduri himself was expressing his disapproval of this kind of comparative methodology (a comparison of any particular quarter to the one preceding it). In this particular case, however, he employs the very same method for which he was criticising his opponents.

Consequently, we conclude that Nodar Khaduri’s statement: “Notwithstanding the fact that the rate of economic growth declined in 2013, around 30 thousand additional jobs have been created in the first three quarters of the year which means that unemployment is decreasing,” is MOSTLY FALSE.