“Investments in education and science have been on the rise since 2012… the annual expenditure of an average family on secondary education has been reduced by 60%.”

On 9 September 2014, the Prime Minister of Georgia, Irakli Gharibashvili, had a meeting with

On 9 September 2014, the Prime Minister of Georgia, Irakli Gharibashvili, had a meeting with teachers. The Prime Minister talked about the implemented projects in the field of education and said:  “Investments in education and science have been on the rise since 2012… the annual expenditure of an average family on secondary education has been reduced by 60%.” According to Mr Gharibashvili, part of the problems connected with the availability of education has been dealt with. It has been the second year since the state started providing school children with free textbooks and this has come as a big relief for their families. The Prime Minister also focused upon infrastructural projects and said that new school buildings are being constructed whilst over a thousand school buildings have been renovated.

In order to verify the accuracy of this information we looked into the amounts of money allocated for the fields of education and science in the annual budget of Georgia. The statistics of money allocated in these fields from 2004 to 2014 look like this:

Chart 1:  Amounts of Money Spent by the State in the Fields of Education and Science 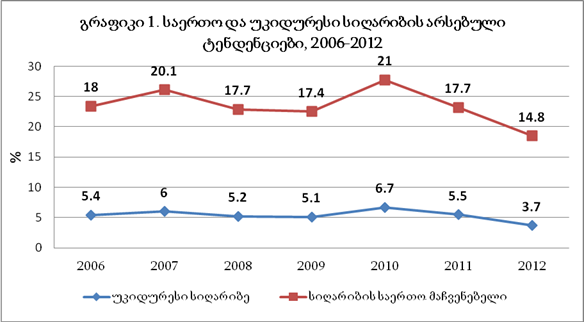 Accordingly, the dynamics of the money allocated for education and science are as follows:

What the Prime Minister had in mind when talking about the 60% reduction of expenditure of an average family on secondary education was the programme of free textbooks. As there are no official statistics about this issue, FactCheck

decided to conduct its own research. We looked into the market prices of school textbooks, interviewed parents of school children and calculated the additional expenses apart from the textbooks. These expenses include the costs of all necessary school supplies such as pens, pencils, notebooks, rulers, sharpeners, erasers, compasses and protractors.

In order to get a general image of the textbook prices we visited several shops and asked for the prices of 1st, 7th and 11th grade textbooks. The results are as follows:  the amount of money necessary for the full set of 1st grade textbooks varies from GEL 80 to GEL 100; it is from GEL 100 to GEL 120 for 7th grade textbooks whilst the cost of 11th

grade books varies from GEL 120 to GEL 170. Thus, the average amount spent by parents for textbooks is GEL 115. As for other school supplies, as parents told us the expenses in this field vary from GEL 50 to GEL 80 each year. If we turn these into percentages we will see that the cost of textbooks constitutes 64% of the overall expenses for secondary education.

For additional information we also examined the so-called Free Textbook Programme, enacted from September 2013. In total, GEL 16.4 million was allocated for this programme in 2013. According to the data of the Ministry of Education and Science of Georgia, GEL 13.2 was assigned for the same purposes in 2014. This raises questions:  Why was it necessary to spend such an amount of money in the second year of the enactment of the programme? Does this indicate the low quality of the textbooks? Was the planning and calculation of risks done properly? FactCheck

keeps on working on this issue and the results of the research will be presented to the readers later.

study found that the cost of textbooks constitutes 64% of the overall expenses for secondary education. The context of the Prime Minister’s statement suggested a similar thing that the annual expenditure of an average family on secondary education had been reduced by 60% after the enactment of the Free Textbook Programme.

Hence, FactCheck concludes that the Prime Minister’ statement:  “Investments in education and science have been on the rise since 2012… the annual expenditure of an average family on secondary education has been reduced by 60%,” is TRUE.