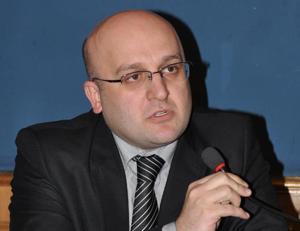 “The processes, which took place from 1 August to 7 September, are evaluated in the statement of the non-governmental organisations. It concerns the purge, carried out by City Hall, during which 155 people were dismissed with 115 of them being let go beca

On 1 October 2014, member of the Parliamentary Minority, Pavle Kublashvili, spoke about the

On 1 October 2014, member of the Parliamentary Minority, Pavle Kublashvili, spoke about the employees who were dismissed from City Hall from 1 August to 7 September. According to Mr Kublashvili, the non-governmental organisations Transparency International (TI), the International Society for Fair Elections and Democracy (ISFED) and the Georgian Young Lawyers’ Association (GYLA) express their suspicion in a joint address about the ongoing personnel policy at City Hall and speak about the possible facts of dismissal with political motivation.

took interest in Pavle Kublashvili’s statement and verified its accuracy.

On 12 September 2014, Transparency International (TI), the International Society for Fair Elections and Democracy (ISFED) and the Georgian Young Lawyers’ Association (GYLA) issued a joint statement based upon information provided by civil servants who had been dismissed from City Hall. The statement says: “We want to respond to the information provided by those civil servants who were previously employed at City Hall concerning their unlawful dismissals and the pressure to leave their jobs. These individuals state that since the beginning of August 2014, there has been systematic pressure towards them and other employees to make them ‘voluntarily’ leave their jobs. According to them, it was usually the heads of the different offices and their deputies who participate in this unlawful act whilst the reason for their dismissals is because of their political views. The threat of initiating legal proceedings against them also takes place.”

According to the statement of the non-governmental organisations, the first case of pressuring employees at City Hall to leave their jobs took place at the beginning of August 2014 with a second occurrence taking place at the beginning of September. As two specialists of the Supervisory Office of City Hall and the head of the same Office’s Krtsanisi District Department say, the Head of the Supervisory Office of City Hall, Gegi Nizharadze, and his First Deputy, Davit Medulashvili, pressured them to leave. They also state that these officials were leaving prepared statements of dismissal in the employees’ offices. In the case of any refusal to sign the prepared statements, Nizharadze was threatening to transfer their cases to investigational bodies.

As the NGOs say, there is a strong assumption that public officers are being released from City Hall with both obvious and hidden pressures. The newly-appointed officials are exceeding their authority and demonstrate a disregard for the law. According to Article 169 of the Criminal Code of Georgia, “forcing a person to write a statement on voluntary dismissal from a position” is a crime.

On 24 September 2014, ISFED published information about those persons who had been dismissed from their positions subordinate to City Hall from 1 August 2014 to 7 September 2014. From 1 August to 7 September, a total of 155 persons were dismissed from City Hall. From them, 115 were let go because of their own personal statements, 32 because of the term of expiry of their position, five because of disciplinary violations and three for other reasons.

On 9 October, Giorgi Khaburdzania, an employee of City Hall, published an audio recording in which the Head of the Supervisory Office, Gegi Nizharadze, and his First Deputy, Davit Medulashvili, force Khaburdzania to leave his position because he is not a supporter of their [Georgian Dream] political course.

The same day, Transparency International (TI), the International Society for Fair Elections and Democracy (ISFED) and the Georgian Young Lawyers’ Association (GYLA) published a statement about those individuals who have been allegedly pursued because of political reasons. According to the statement, Giga Makatsaria wrote his written request for dismissal from his position in response to the demand of the head of the Supervisory Office and his deputy. In the case of not complying, Makatsaria was threatened with a “screwing up” of his private life.

Kakhaber Buskivadze, who had been working for the Supervisory Office since 2008, stated that at the end of August 2014, the head of the Office explained to him, “a team goes, a team comes” – meaning that the ones who had been working in leading positions would have to leave. According to Buskivadze, the head also stated that he would try to keep him in a lower position but that his orders were coming from above. Buskivadze tells that he was forced to accept the demotion and was transferred to the position of a main specialist.

Another example concerns Nikoloz Namicheishvili who was working as the Head of the Supervisory Office Staff. From 18 August to 5 September, he was demoted twice based upon his own personal statement.

The statement published by the non-governmental organisations says: “Despite the fact that in the given cases the demotion was due to personal statements, it is less likely that such requests to be transferred from a higher position to a lower one were made by the individuals voluntarily.”

contacted GYLA. Currently, the organisation is studying the cases of the concerned individuals and plans to contact the Prosecutor’s Office in the nearest future.

Transparency International (TI), the International Society for Fair Elections and Democracy (ISFED) and the Georgian Young Lawyers’ Association (GYLA) published three statements in total about the dismissal of civil servants from City Hall after the Local Self-Government Elections owing to political motivation. ISFED has published data about those persons dismissed from 1 August to 7 September based upon information received from City Hall.

The non-governmental organisations have expressed their suspicion that the employees have been dismissed owing to political reasons and they have asked law enforcement bodies to react.