“Car trade has decreased which is due to the incompetence of the government.”

On 1 October 2014, at the session of the Parliament of Georgia, Parliamentary Minority MP, Giorgi

On 1 October 2014, at the session of the Parliament of Georgia, Parliamentary Minority MP, Giorgi Vashadze, stated that one of the most successful businesses of recent years, car trade, has experienced a period of regress since the Georgian Dream coalition assumed office. According to Mr Vashadze, this is due to the incompetence of the ruling coalition.

According to the data of the National Statistics Office of Georgia, the export of cars has been increasing every year since 2010. 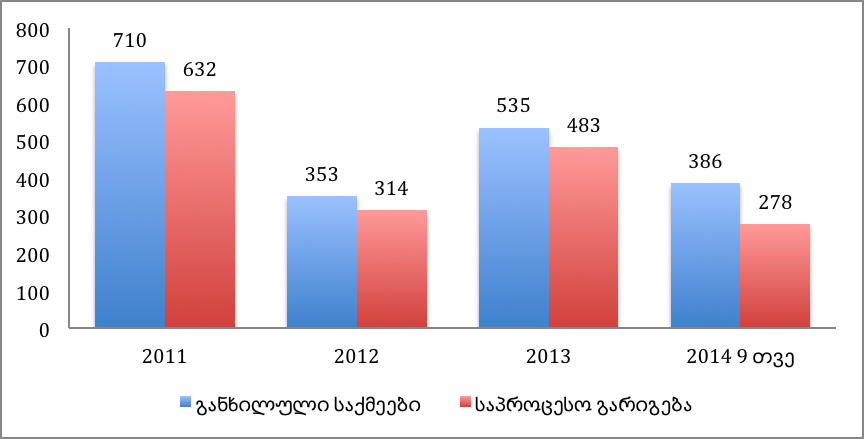 The National Statistics Office has published the data of the first nine months of 2014 only at this stage. As we can see, the income from car export equalled USD 408,570 in the first nine months of 2014. It should be pointed out that this number was equal to USD 511,742 in the same period of 2013. The income from car export has decreased by USD 103,172 (about 21%) in January to September 2014 as compared to the same period of the previous year.

According to the National Statistics Office of Georgia, Azerbaijan is the main buyer of the cars exported from Georgia from 2010 to 2014. However, the amount of exported cars to Azerbaijan has decreased significantly in 2014 as compared to recent years.

Apart from Azerbaijan, Armenia and Central Asian countries are the main market for the cars exported from Georgia.

According to car dealers, the main reason of the decrease in export is the enactment of the Euro-4 standard[1]

by Azerbaijan and the entry of Kazakhstan and Armenia into the Eurasian Union. On 1 April 2014, the Euro-4 standard was enacted in Azerbaijan which prohibits the import of cars manufactured before 2005. According to the official position of Azerbaijan, this new regulation aims to decrease the harm to the environment by reducing vehicle emissions. According to car dealers, the new regulation has prohibited the import of the cars manufactured before 2005. Georgian dealers used to trade mainly with vehicles manufactured before 2005. According to the Project Coordinator of the Economic Policy Research Centre, Irina Guruli, the aforementioned regulation will have a short-term negative effect upon both car dealers and small manufacturers whilst in the long-term perspective the market will adapt and the effect will be neutralised. It should be pointed out that the number of the cars exported to Azerbaijan decreased from 33,356 to 14,822 (almost 44%) in 2014. Hence, we can say that the dealers are already adapting to the new rules.

Kazakhstan was another important partner of Georgia in terms of car export. However, from July 2011, the amount of exported cars decreased significantly after Kazakhstan entered the Eurasian Union. Because of the common tariff policy of the Eurasian Union, the customs duties on cars have increased about seven times. On 9 October 2014, Armenia also signed the agreement of its entry into the Eurasian Union. It will ratify the document on 1 January 2015. Hence, the export of cars to Armenia is expected to decrease as well.

contacted the representative of the non-governmental organisation, Public Initiative, Vasil Urushadze. According to him, car dealers are dissatisfied with the inaction of the government. According to Mr Urushadze, the previous government managed to reach an agreement on the simplified export procedures through diplomatic negotiations with the Government of Azerbaijan. He also pointed out that the Government of Georgia has expressed no interest in the reduction of car export and has taken no active steps about the issue.

also contacted Giorgi Vashadze. He explained that in order to compensate for the loss caused by the reduction of export, the government can increase the period of vehicle clearance (up to 90 days). In 2010, the then Prime Minister of Georgia, Nika Gilauri, increased this period from 20 to 45 days. According to Vashadze, this kind of legislative change is one of the ways in which to solve the crisis. It might also be advisable to temporarily exempt car exporters (both the individuals and legal entities) from the customs penalties (a total of 3,178 individuals were fined from 1 January 2014 to 24 September. The total amount of money paid to the budget was equal to GEL 4,391 thousand). The MP also said that the government has done nothing to help the car dealers in 2014 and this was exactly what he meant when speaking about the incompetence of the government. Mr Vashadze also pointed out that he is currently working on a bill which aims to resolve the crisis caused by the reduction of car export.

The export of cars has indeed been growing for the past four years; however, according to the data of the first nine months of 2014, the export has decreased. Export of cars is expected to be lower in 2014 than in the previous years. Giorgi Vashadze’s statement about the lower numbers is, therefore, accurate. It should also be noted that the MP offers the government a resolution plan for the problem based upon past experience. However, the pathos of the MP is not entirely accurate when wholly attributing the export reduction to the incompetence of the government. The Euro-4 standard, enacted by the Government of Azerbaijan, has significantly reduced car export from Georgia to Azerbaijan. It should be noted that appropriate reforms are necessary in order to balance the risks of re-export to Georgia. The Government of Georgia, however, has taken no such steps so far.

FactCheck concludes that Giorgi Vashadze’s statement: “Car trade has decreased which is due to the incompetence of the government. You can see the reduced numbers yourselves,” is MOSTLY TRUE.
[1]