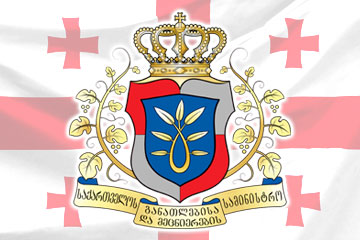 On 5 December 2014, at a briefing at the Parliament, United National Movement MP, Irma

In response to the aforementioned statement, the National Education Degree Development Centre released an official announcement and explained that Alexandre Shelia is the Centre’s international consultant and his salary is implemented from a targeted grant from the UN Development Programme, funding the National Centre for Educational Quality Enhancement, and not from budget funds. The statement also explained that Mr Shelia, a citizen of the United States, has been invited to the project as an international consultant in order to start up the Centre’s education degree system. Within the scope of the agreement with the UN Development Programme, accountability rules are defined and their compliance is compulsory. Accordingly, all of the duties and tasks undertaken by an international consultant and the cost of the product he creates and delivers are subject to appropriate payment with the conditions of the payment described in detail in a contract. Thus, the National Education Degree Development Centre is in compliance with the requirements of the donor in terms of payment for an international consultant.

Dimitri Shashkin, former Minister of Education and Science of Georgia, responded to the statement of the National Education Degree Development Centre and accused the current Minister, Tamar Sanikidze, of lying. Mr Shashkin stated: “Sanikidze is lying when she is saying that the amount was paid from the UN Development Programme targeted grant and not from the budget.” Mr Shashkin also explained the legal nuances and said that the Georgian state budget consists of taxes together with an income section as well as loans and grants. This means that the grants that the state receives from international and different organisations are transferred to the state budget and comprise a part of the state budget in the same way as the amount paid by a tax payer is reflected in the total budget. As Mr Shashkin stated, the Ministry of Education and Science was required to announce a tender for this project according to the rules of the procedure. Instead of this, the Ministry circumvented the process and formalised an agreement directly with only one person.

took interest in this matter and decided to check it.

On the base of a 1 September 2014 ordinance of the Prime Minister of Georgia, Irakli Gharibashvili, the standard agreement between the National Education Degree Development Centre of Georgia and the UN Development Programme was sanctioned for formalisation upon the grounds of which the aforementioned Centre, within the UN’s targeted grant, should manage the Education Degree and Electronic Administration project. GEL 143,074 was earmarked from the grant as the salary to be paid to Alexandre Shelia for his work in consideration of the period of activity as indicated in the labour agreement. Considering the duration of the contract at a month-and-a-half, Mr Shelia’s daily salary for his working days was GEL 5,502.

The labour agreement formalised between the National Education Degree Development Centre and Alexandre Shelia shows that Mr Shelia is both a project manager and consultant.

The labour agreement explains that the agreement between Alexandre Shelia and the National Education Degree Development Centre was formalised according to Section E of Item 1 of Clause 5 of the Regulations of the National Education Degree Development Centre. In particular: “The Centre’s Director, according to the agreement, has the right to invite specialists, including foreign specialists, for the implementation of specific activities.” Accordingly, employment was implemented without tender in keeping with the law and with no violations. It should also be said that according to the rules of receiving a grant, the donor organisation is informed in detail in advance about the fees to be paid as salaries. Accordingly, the Ministry of Education and Science could not alter the issue of an invited consultant’s salary payment. It is clear, certainly, that the amount paid to Mr Shelia as well as the issue of holding a tender could be topics for discussion. However, the abovementioned regulations give the Director of the National Education Degree Development Centre the right to invite specialists for the implementation of specific work activities.

The statements of both the former Minister of Education and Science, Dimitri Shashkin, and MP, Irma Nadirashvili, that Mr Shelia’s salary payment was made from the state budget are not correct. Indeed, the targeted grant is a part of the state budget which is then directed to the relevant institutions but it cannot be considered as the equivalent of budget revenues received from taxes. The amount allocated from donor organisations is considered for particular aims and it is impossible to spend the money in another direction such as, for example, increasing the salaries of teachers or for any other projects for which it is not designated.

Alexandre Shelia received GEL 143,000 for a month-and-a-half of work as his salary payment. The Ministry of Education and Science of Georgia made the payment as a part of a UN Development Programme targeted grant. Indeed, the targeted grant is a part of the state budget but it is not correct to equate it with taxes paid to the state budget in that it has its particular designation and cannot be spent on other activities. Additionally, it does not belong to the budgetary funds.

Accordingly, FactCheck concludes that the statement of the Ministry of Education and Science of Georgia regarding Alexandre Shelia’s salary payment is MOSTLY TRUE.

Ministry of Education and Science