"Our economy decreased by USD 35 million at the end of 2014 which means that Georgia has become poorer."

United National Movement MP, Zurab Japaridze, stated: "Export has been decreasing for the seventh consecutive month since August 2014. We had a 26% fall in exports in January and February 2015. Import has also gone down. Bank loans for about 530,000 Georgian citizens have become significantly more expensive. The national currency of Georgia has depreciated by 35% under this government. The economy of Georgia had decreased by USD 35 million by the last quarter of 2014 as compared to the same quarter of 2013. This means that our country has become poorer."

According to the preliminary data of the National Statistics Office of Georgia, the economic growth of Georgia was 4.8% in 2014. The economy grew by only 1.8% in the last quarter of 2014. A 2% economic growth is expected in Georgia in 2015. Negative tendencies in external trade had the biggest influence upon the decrease in the growth of the GDP.

Exports from Georgia had a high level of growth at the beginning of 2014; however, the growth rate began to decrease in August and the trend continues today as well. The overall decrease in exports amounted to 2% in 2014 (see Graph 1) whilst they decreased by 36% in January and February 2015. 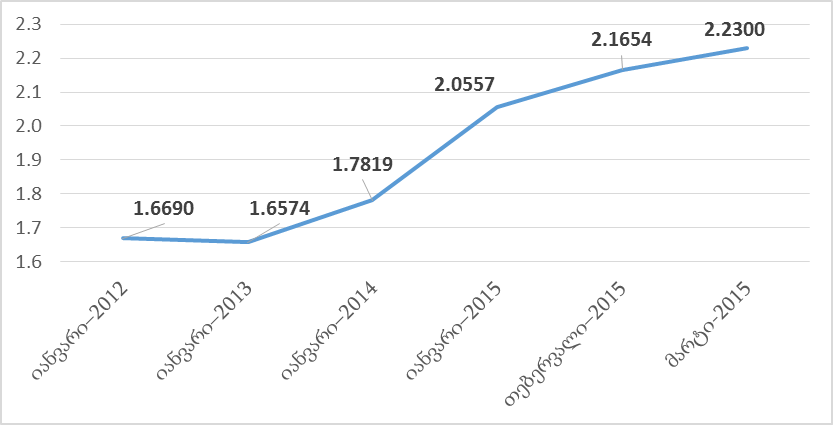 Source: National Statistics Office of Georgia The reason given for the decrease in exports from Georgia comprises the economic processes occurring in its trade partner countries. FactCheck wrote

Growth of Exports by Groups of Countries, 2014 and January-February 2015

of the national currency by the end of the year. The exchange rate of GEL decreased by 12% in 2014 whilst it depreciated by 21% with regard to USD in the first four months of 2015.

It should also be noted that the National Statistics Office of Georgia published the data of the external trade of the first quarter of 2015 on 21 April 2015. According to these data, exports decreased by 28% from January to March 2015 as compared to the same period of the previous year whilst imports decreased by 3%.

Given the fact that Georgia is an import-dependent country, the depreciation of the national currency has caused the prices on imported goods to increase. In addition, due to the high level of the dollarization of bank loans, the depreciation of GEL has made servicing the loans more expensive for a significant part of the public. FactCheck wrote

about this issue earlier as well.

The increase in the exchange rate of the national currency has made imports more expensive which caused the imports to decrease at the beginning of 2015. Prices increased for medications and groceries, in particular, which worsened

the situation for mainly low-income families.

The decrease in exports from Georgia started in August 2014 and the trend continues today as well. Exports decreased by 2% in 2014, by 36% from January to February 2015 and by 28% in the first quarter of 2015. The decrease in the country’s exports caused the worsening of the negative external trade balance of Georgia which, among other factors, caused the national currency to depreciate. Given the dependence upon imports and the high level of the dollarization of bank loans, the depreciation of the national currency caused the purchasing power of the population to decrease. Prices increased mainly for medications and groceries. Due to the depreciation of GEL, servicing bank loans became more expensive for a significant part of the population. In addition, the nominal GDP in USD decreased by USD 41 million.