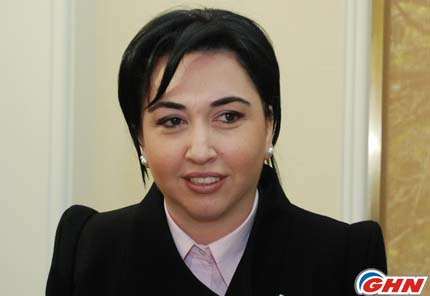 "The amnesty did not cover any violent crimes."

Chairperson of the Human Rights Committee of the Parliament of Georgia, Eka Beselia, on air on

Chairperson of the Human Rights Committee of the Parliament of Georgia, Eka Beselia, on air on Imedi TV, declared: "The amnesty did not cover any violent crimes. It did not include a single article which envisaged amnesty for those inmates who had committed homicide, intended homicide, robbery or crimes against human life and health. Only those inmates who had committed misdemeanours, economic crimes or had been serving their sentences for drug addiction were released from prisons."

The Parliament of Georgia adopted the last Law on Amnesty (N 1863) on 25 December 2013. According to the law, the amnesty covered those individuals who had committed crimes as indicated in Article 339, Article 362 or the first part of Article 363 of the Criminal Code of Georgia. According to the Criminal Code of Georgia, these particular crimes concern the preparation and using of forged documents and the purchase or sale, for mercenary purposes, of an official document. Additionally, it encompasses the misappropriation, concealment, destruction or damaging of a document. Therefore, the amnesty of 25 December 2013 did not indeed cover violent crimes.

As concerns the Law on Amnesty (N 894) adopted on 29 July 2013, it included Article 157, Article 158 and Article 159 of the Criminal Code of Georgia. These Articles prescribe the crime of the illegal obtaining of personal or family information. The amnesty covered those individuals who handed over information of a private or family security content, the illegal interception of private communications, information obtained through technical means, computer data, recording of private correspondence, interception of post and the recording of conversations by telephone or other technical means, etc., within three months after the law came into force. Therefore, the amnesty of 29 July 2013 also did not include those inmates who had committed violent crimes.

The largest amnesty since the Georgian Dream coalition has taken power in Georgia was accomplished upon the basis of the Law on Amnesty which was adopted on 28 December 2012 (N 202). As underscored by Ms Beselia herself, it was an unprecedented amnesty with 60% of the total number of inmates having been released. The amnesty covered misdemeanour crimes as prescribed by the Criminal Code of Georgia with the exception of certain crimes which are also listed in the Criminal Code of Georgia. These crimes include:

According to Article 12 of the Criminal Code of Georgia, a misdemeanour is a crime of aforethought or a crime without due caution and circumspection for practice whose sentence provided by this Code is not in excess of five years of imprisonment. Taking into account Eka Beselia’s statement, it is interesting to see whether or not the amnesty covered those misdemeanours which are still categorised as violent crimes by the Criminal Code of Georgia in spite of the aforementioned list of exceptions.

According to Eka Beselia, the amnesty did not include a single article which covered homicide, intended homicide, robbery and crime against human life and health. These particular crimes are qualified as crimes against humans and are listed in Chapter 7 of the Criminal Code of Georgia. Most of these crimes are listed under the category of grave or especially grave crimes and amnesty has not covered those individuals committing such crimes. However, the amnesty did cover misdemeanours against human health which automatically imply violence against humans:

The amnesty has also covered those misdemeanours such as domestic violence, AIDS contraction, infecting someone with an especially dangerous infectious disease, coercion into becoming an organ donor, other coercion (illegal restriction of a person’s freedom of action), acts of threat (threat of death or damage to someone’s health or destroying his property).

Conclusion According to Eka Beselia’s statement, the amnesty did not cover those inmates who had been serving sentences for homicide, intended homicide and robbery. FactCheck

’s research has confirmed that those crimes had indeed not been covered by the amnesty.

’s research, certain crimes prescribed in the Criminal Code of Georgia which were covered by the amnesty by definition comprise violent actions against humans.

FactCheck concludes that Eka Beselia’s statement, "The amnesty did not cover any violent crimes," is HALF TRUE.
თეგები: