According to the statement of the Minister of Agriculture of Georgia, Otar Danelia, the increase in

According to the statement of the Minister of Agriculture of Georgia, Otar Danelia, the increase in the price of bread defies any logic: "We must use every method available to us to prevent this from happening. If any kind of help is necessary from the state, we will support this field but the increase in the price of bread definitely defies any kind of logic."

verified the accuracy of the aforementioned statement and studied the situation concerning the price of bread.

About 170,000 tonnes of wheat were harvested in Georgia in 2015 which is a record high number as compared to the past several years.

Source: Ministry of Agriculture of Georgia 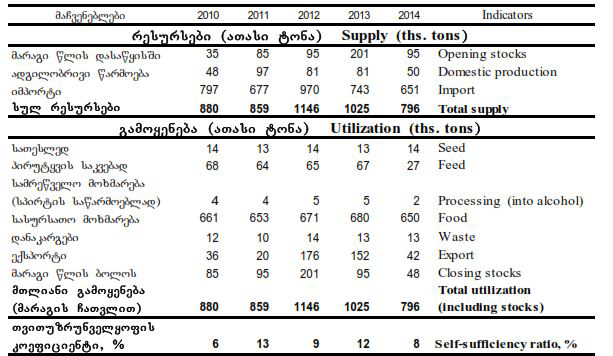 Imports of Wheat by Country (January to July 2015)

As Russia and Ukraine are the main sources of import, we present wheat prices in these countries by year.

The issue of the increases in the price of bread has become so widely discussed due to the depreciation of GEL. The national currency has depreciated by almost 40% as compared to the same period of the previous year and its exchange rate with regard to USD has reached 2.45 (when the discussion about the bread price increases started, the exchange rate was set at 2.30). On the other hand, Russian wheat has become 25% cheaper thus far in 2015 whilst the price of Ukrainian wheat has decreased by 16%. Hence, it is clear that the decrease in wheat prices in USD fails to balance the price increases caused as a result of the depreciation of GEL. The fact that local production has been increased has also been taken into account but this is still not enough to cover the effects of the depreciation of the national currency.

Despite the fact that wheat has become cheaper, the price of wheat flour has gone up. FactCheck

asked the Executive Director of the Georgian Wheat Association, Levan Silagava, to comment upon this issue. According to his statement, the depreciation of the national currency has caused the price of wheat flour to go up. Despite the fact that wheat has become cheaper, the mills are buying wheat in USD which is why the price of flour has increased (in this case from GEL 37 to GEL 44). Mr Silagava underlined what he believes to be a very important issue: "Bread producers always blame the mills that the price of flour has increased and they are forced to increase bread prices as well. If the increase in the price of flour should be manifested in the increase in bread prices, then why does the decrease in flour prices not have an effect upon bread prices? For example, the price of flour dropped from GEL 47 to GEL 35 in March 2013 but this did not affect bread prices. The price of one sack of flour was GEL 35 for almost two years (until January 2015). The main question is:  if bread did not become cheaper before, then why should it become more expensive now? Where is the logic in that?"

Bread Factory, Malkhaz Dolidze, to comment upon the issue. According to his statement, the price of flour has increased significantly for the past month. If the cost of one sack of flour (50 kg) was GEL 37 before, it is GEL 44 now. The growth of the price of flour was due to the depreciation of GEL and the violation of market principles. Mr Dolidze added that the producer must have a choice in terms of both the price and the quality. "As far as I know, there are certain delays concerning flour imported from other countries. One of the versions is that they are trying to encourage local production. I do support the encouragement of local production but not at the expense of our people," said Mr Dolidze. According to him, the prices for all products used in the production of bread have gone up: salt, yeast and fat. This is supplemented by the growth in electricity tariffs with all of the conditions in place for the growth of the price of bread.

On 17 August 2015, the Revenue Service of Georgia made an announcement about the delays in imports of wheat and flour, saying that the import of wheat and flour into the country are not being delayed and that all the appropriate customs procedures will be finished in one day.

A record amount of wheat (170,000 tonnes) was harvested in Georgia in 2015. However, local production covers only from 6% to 10% of the country’s annual consumption (an average of 940,000 tonnes, including reserves). In addition, according to experts, only 12% to 15% of the wheat harvested in Georgia is used in the production of foodstuffs. The largest wheat importer country to Georgia is Russia (90%). Wheat in Russia has become cheaper. However, the drop in wheat prices in USD fails to balance the price increases caused due to the depreciation of GEL. The growth of the prices of wheat flour is due to this main factor.

Bread producing companies also point to the delays in the imports of wheat; however, the Revenue Service of Georgia says that there are no delays in the process.

The part of the Minister of Agriculture of Georgia’s statement where he speaks about the decrease in wheat prices and wheat reserves is correct. Wheat prices have dropped and Georgia does indeed have reserves (according to the information of the Ministry of Agriculture of Georgia, the country maintains a permanent two-month wheat reserve). However, in the situation when wheat flour has become more expensive, electricity tariffs have increased, there is a growing inflation in the country and the national currency continues to depreciate, the price of bread is also affected. Bread producing companies say that the prices of all products used in the production of bread have gone up.