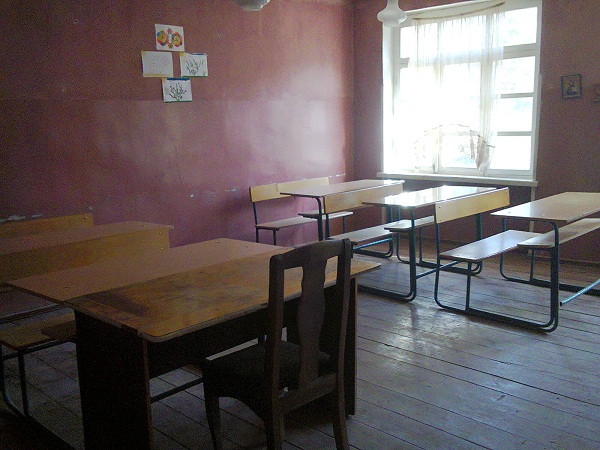 One Pupil in the Classroom

Tornike Gotiashvili moved into the second grade in the village of Sochkheti’s (Tkibuli municipality) public school. He is the only pupil in the class. Throughout the entire year, Tornike made a 20 kilometre-long commute by bus every day in order to prevent the closure of the first grade in Sochkheti’s school. This was his mother’s decision because she teaches at the school and is very fond of the village, the school, the place and the children.

Tornike will go to school in Sochkheti this year as well but will be sitting alone at his desk. In response to the question from his almost century-old great-grandmother who asked him who is sitting next to him in class this year, a boy or a girl, Tornike looked at his mother and whispered in her ear: “How can I explain to Grandma Keto why I am sitting alone?”

Unfortunately, first grade classes, one of which was maintained in the village of Sochkheti because of Tornike’s mother, were closed in the majority of Imereti’s villages.

Sochkheti suffers from a problem of out migration – but it is not the only one to have this fate. Imereti’s villages are being depopulated in every of the region’s municipalities with the best indicator of this process evident in the decline in the number of pupils at schools. If we look at the data of the last two universal popular censuses, we will see that the number of those living in villages is dwindling. In 2002, 47.7% of Georgia’s total population lived in rural areas whilst in 2014 this number dropped to 42.6%.

An analysis of the number of pupils going to school in villages in the municipalities of Kharagauli, Chiatura, Khoni, Samtredia and Zestaponi illustrates that pupil numbers are shrinking annually and it is not a meagre decline.

Every year, there are approximately 100 pupils less in the village schools of the Kharagauli municipality. In 2011, there were 2,211 registered pupils whilst in 2016 this number dropped to 1,675.

The out migration process has also negatively affected the public school in the village of Boriti which was the largest school in terms of the number of pupils in the municipality five years ago, counting a student body of 202 pupils. In 2016, only 166 pupils remained.

There were 141 pupils studying at the Galaktion Tabidze public school in the village of Ivandidi. Five years ago, this number was 201.

The number of pupils in 26 village schools in the Zestaponi municipality decreased from 3,876 to 3,413.

The most difficult situation is seen in the Chiatura municipality. Public schools are active in 36 villages. There were 3,305 pupils in the 2011-2012 academic year with this number almost halving and dropping to 1,829 in the 2015-2016 academic year.

In 2011, Itkhvisi’s public school with its 273 pupils was named the largest school in terms of the number of its student body. In 2015, however, only 175 children started the new academic year. In the period of five years, the amount of pupils in the school dropped by almost 100.

did not receive any information from the Tkibuli Educational Resource Centre in regard to the number of pupils. If these details had been obtained, we might have been able to find out more about Tornike and if he would have gone to school with fellow classmates had he been born a little earlier.

In two years, Omar, Tornike’s little brother, will sit at his school desk, too. Their mother does not know herself whether or not she will continue to send her children the 20 kilometres to school in order to keep Sochkheti’s first grade class running or if she will choose an easier path and take her children to a prestigious school in town.