On 18 November 2016, in his speech during the session of the Parliament of Georgia, United National

On 18 November 2016, in his speech during the session of the Parliament of Georgia, United National Movement member, Irakli Abesadze, discussed the situation in regard to corruption in Georgia. Mr Abesadze stated: “I am not saying anything about increased cases of bribery which was reflected in Transparency International’s Global Corruption Barometer research, illustrating that only 26% of the population, which is a critically low number, thinks that your government fights corruption effectively whilst according to the same research published in 2011, 77% of the population thought that the Government of Georgia was fighting corruption effectively.”

Transparency International surveyed some 60,000 citizens in 42 countries of Europe and Central Asia.

Of note is that the research has been carried out since 2002 although the questions posed to participating respondents have not always been identical. For instance, interviewed respondents in 2011

were asked to answer a question on their governments’ actions in the fight against corruption using the following options – a) Ineffective, b) neither effective nor ineffective and c) Effective 77%. In regard to research carried out in 2016, the respondents’ assessments were divided into the following options –  1) Do not know – 22%, 2) Have not heard enough to say – 10%, 3) Very well – 3%, 4) Fairly well – 23%, 5) Fairly badly – 24% and 6) Very badly – 17%. About 1% of the interviewed respondents refused to answer the question. 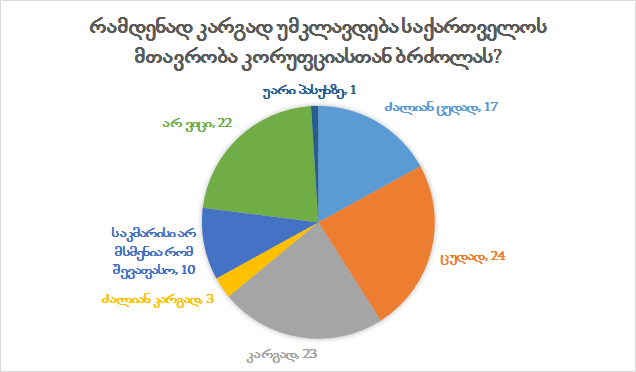 Therefore, it is impossible to directly compare this part of 2011 and 2016 research. However, we could say that 12% of interviewed people assessed the Government of Georgia’s fight against corruption as ineffective whilst this number increased significantly by 2016, reaching 41% (if we take two categories – Fairly badly and Very badly – together). In regard to the number of respondents who had a positive assessment toward the government’s fight against corruption, 77% of interviewed citizens in 2011 said that the government was fighting against corruption effectively whilst this number dropped to 26% in 2016 (if we take two categories – Fairly well and Very well – together).

The Global Corruption Barometer also conducts research on the rate of corruption in state services. According to the 2016 research, 58% of Georgians who took part in the survey had been in contact with public services with 7% of them having to pay a bribe for using a public service. Of note is that this number was 4% in 2013.

The share in the general population of Georgia of those who had to pay a bribe over the last 12 months is 4%. Of necessary note is that this is one of the best results among European and Central Asian countries with Georgia being outperformed only by the following countries: Germany, Slovenia, Spain, Cyprus and Portugal. 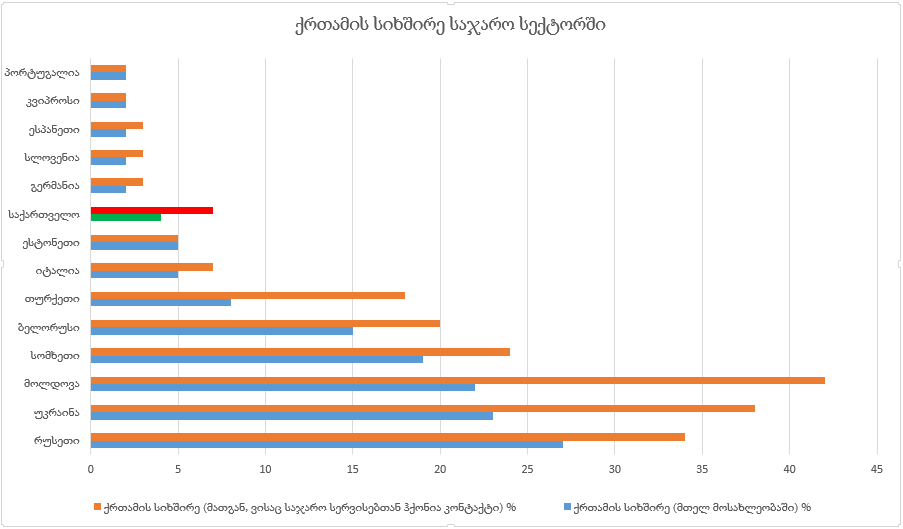 In regard to 2011, the Global Corruption Barometer did not conduct research to measure the rate of corruption either in state services or in terms of paying bribes.

According to the Transparency International’s Global Corruption Barometer 2016 research, the rate of corruption in public services increased from 4% to 7%. Irakli Abesadze is right to point out that cases of paying bribes indeed increased. However, as compared to other European and Central Asian countries, Georgia is classified with a low level of corruption.

The Ministry of Regional Development and Infrastructure of Georgia