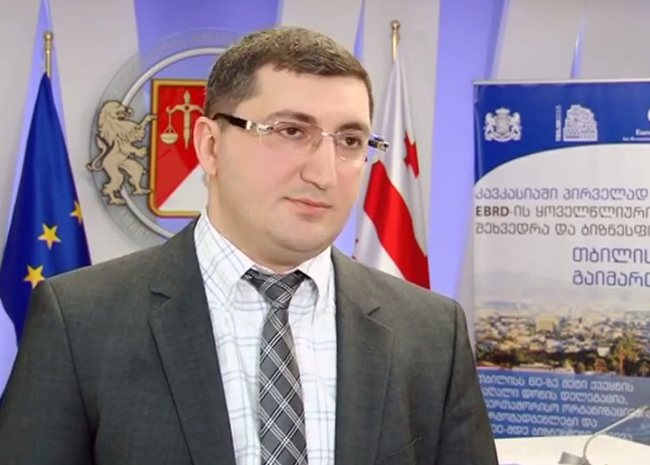 The Deputy Minister of Finance, Giorgi Kakauridze, in his speech at the session of the

Mostly False
In the statement is the elements of the truth, but the important facts that could have made other impressions
Facebook Linkedin Twitter Print
The Deputy Minister of Finance, Giorgi Kakauridze, in his speech at the session of the Parliamentary Minority, stated:

“As a result of the Government of Georgia’s correct economic policy, we have one of the highest economic growth rates in the region.”

As stated by Giorgi Kakauridze, Georgia's first quarter economic growth rate was the highest in the region. To analyse this part of the statement, it is important to clarify what is meant under the term region. The narrow definition of the region might include Georgia’s immediate neighbourhood (Armenia, Azerbaijan, Turkey and Russia). The International Monetary Fund categorises Georgia with the Commonwealth of Independent States (CIS) member state group (even though Georgia has ceased its membership in the CIS). Even by the World Bank’s classification,

Source: Trading Economics, World Bank   In 2016, Georgia was in the 13th position with its 2.7% economic growth rate. Based upon the economic growth figures for the first quarter of 2017, Georgia occupies the 7th

place from the group of 24 countries. Of our immediate neighbours, only Armenia is ahead of us with its 6.5% economic growth rate. The economic growth figures for Ukraine (2.5%), Turkey (1.4%), Russia (0.5%) and Azerbaijan (-0.9%) significantly lag behind Georgia’s economic growth rate as registered in the first quarter of 2017.

In the process of comparing Georgia’s economic growth figures to those of our neighbours, we have to take into account their current situations. Falling oil prices, declining incomes from the export of natural gas and the 2016 conflict in Nagorno Karabakh worsened Azerbaijan’s economy and resulted in a significant depreciation of its national currency.

Falling oil prices and international sanctions imposed in the wake of the crisis in Ukraine negatively affected the economic situation in Russia. This, in turn, had a significant negative impact on Armenia’s economy (Armenia holds membership in the Eurasian Economic Union and its economy is heavily dependent on Russia). A political crisis, an attempted coup d’État and frequent terrorist attacks inflicted serious damage to Turkey’s economy as well.

In regard to Georgia’s increased economic growth rate in the first quarter of 2017, this happened largely because of improvements in the situation abroad. The volume of remittances transferred in January-March increased by 22.3% (USD 53 million), the export of goods increased by 30% (USD 134 million) and the number of tourists grew by 26%. The growth trend has been kept in place throughout April-May as well. For all of these three components, the improving economic situation in Russia is very important.

Conclusion Georgia’s real GDP growth for the first quarter of 2017 was 5.1%. This figure cannot be categorised as high under any definition of the region. If we take only our neighbours, Armenia has a higher economic growth rate (6.5%) as compared to Georgia. However, if we use the World Bank’s classification, Georgia will take 7th

If we take into account last year’s figures, Georgia is in the 13th

place and lags behind Turkey which had significant political and security problems in the last year. We also have to consider that the Russian crisis and falling oil prices significantly harmed the economies of Armenia and Azerbaijan.

FactCheck concludes that Giorgi Kakauridze’s statement is MOSTLY FALSE. Comment: Preliminary estimates about economic growth rates for countries are subject to frequent modification. Therefore, FactCheck will come back to this issue and amend the article as required should any significant differences in economic forecast figures appear.
თეგები: