There was a positive economic dynamic in the beginning of 2018 which was, to a large extent, caused by foreign trade indicators

Georgia’s foreign trade turnover amounted to USD 864 million in February 2018 with USD 224 million falling on export and USD 640 million on import. Therefore, compared to the analogous period of the last year, export increased by 25% whilst import increased by 9%. The difference in the growth rate, however, turned out to be insufficient for the increase in net export so the account deficit of the current year worsened by 1.5% as compared to the same period of the previous year.

In February 2018, net remittances amounted to USD 95 million which exceeds the analogous amount from the last year by 20.6%. A 27% increase was recorded in the flow of tourists to Georgia with 177,000 more arrivals accounting for 40% of all of the visitors who entered the country. Statistics for revenues received from tourism in 2018 are not available at this point; however, considering the increased flow of tourists, it is likely to have undergone a positive trend.

In order to comprehensively analyse the parameters mentioned by the Prime Minister, it is important to consider them in relation to the GDP of the respective period; however, relevant data are currently available. Nevertheless, Giorgi Kvirikashvili, whilst speaking about the indicators, underlined that the positive changes exert a positive influence on the country’s economic growth. This is true with remittances being the only exception as their effect on economic growth is not evident.

“The positive dynamic in February 2018 was, to a large extent, due to improved foreign trade indicators. Namely, in February 2018, export increased by 25% and import by 8.7%. Revenues from international tourism grew as well. As for the other factors contributing to the growth, there has been a 20.6% growth in net remittances received.”

In February 2018, Georgia’s GDP grew by 5.5% which exceeds the January indicator by 1.1% points whilst the average economic growth rate for January-February is 4.9%. Significant growth was recorded in the processing industry, utilities, social and personal services, operations with real estate and trade.

There was a positive trend of change in foreign trade indicators in February 2018 with Georgia’s foreign trade turnover (total of export and import) constituting USD 863.7 million which is higher than the analogous indicator for last year by 21%. From the amount of gross turnover, the share of export was USD 223.7 million whilst the share of import amounted to USD 640.7 million. These figures are higher than those of February 2017’s indicators by 25% and 9%, respectively. However, it is noteworthy that the difference between the growth rates of export and import turned out to be insufficient to increase the amount of net export (export minus import) as compared to the analogous period of the previous year – the current account deficit deteriorated by 1.5% (in February 2017 the analogous deterioration of the indicator was up to 12%).

In February 2018, oil and oil products, copper ores, cars and medication dominated imported products. The largest share of import in this period came from Turkey, Russia, Azerbaijan, China and Ukraine.

In February 2018, the amount of remittances received by Georgia amounted 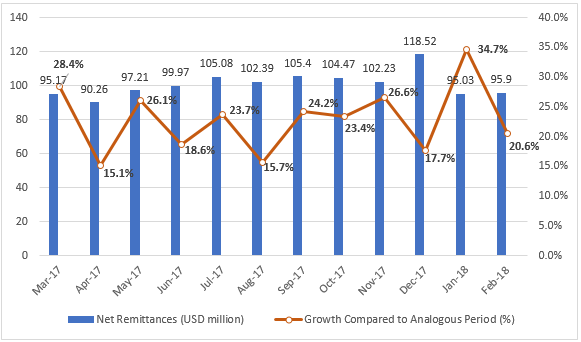 Source:  National Bank of Georgia In February 2018, the number of visitors who entered Georgia increased by 20% as compared to the analogous indicator from the previous year and amounted to 441,000 with tourists[1]

accounting for 40% of the figure at 177,000 which, in turn, is 27% more as compared to the February 2017 indicator. Data for tourism revenues in 2018 are not yet available and so it is impossible to discuss this issue. Nevertheless, we can estimate an increased revenue from tourism in February 2018 in light of the increased inflow of tourists in this period which would also be positively reflected in the economic growth for the respective month.

In order to evaluate the real magnitude of the foreign trade and remittances indicators, it is not enough to discuss and compare them in absolute numbers – it is essential to discuss them in relation to the GDP. However, such an analysis cannot be made in this article as the GDP figure for 2018 is currently unavailable.

[1] A visitor who spends 24 hours or more in Georgia is considered to be a tourist.
თეგები: