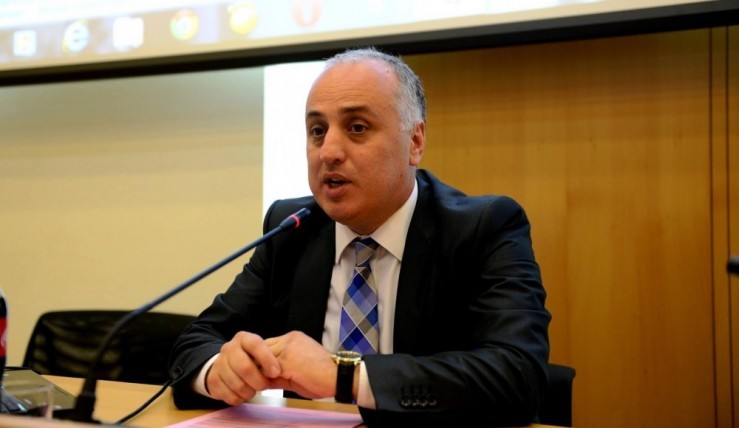 Analysis On 4 April 2018, at the plenary session of the Parliament of Georgia, Parliamentary Majority member, Dimitri Khundadze, stated: "

Head of the Mother and Child Care Directorate at the National Centre for Disease Control and Public Health, Lela Shengelia, in her interview with FactCheck, 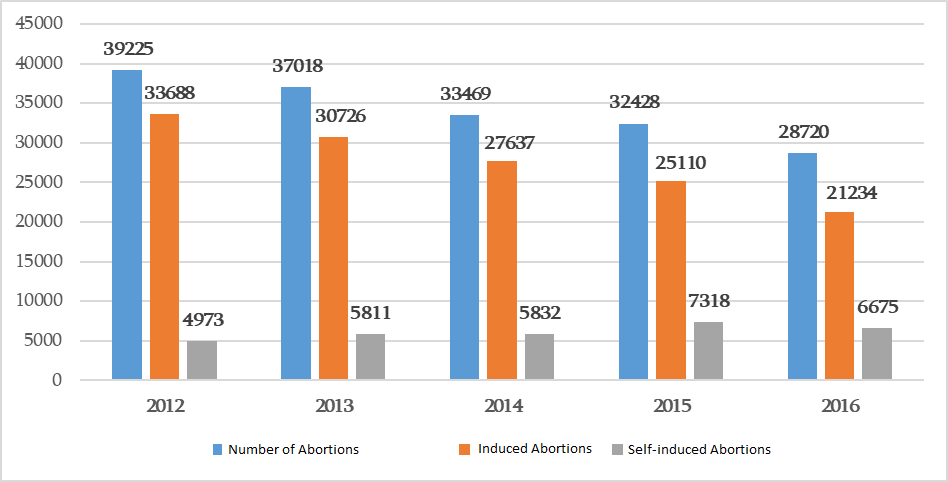 despite the trend of a decline in the number of abortions, the abortion to birth ratio in Georgia is much higher as compared to the European region, the Commonwealth of Independent States and the European Union. 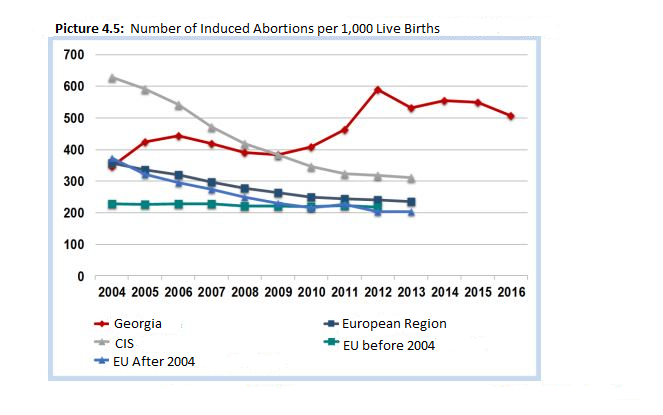 Source: National Centre for Disease Control and Public Health, Database “Health for All”

The Head of the Directorate of Mother and Child Care at the National Centre for Disease Control and Public Health, Lela Shengelia, in her interview with FactCheck,

stated further: “No significant differences are observed in the overall coefficient of induced abortions and it remains stable within the margins of 1. The formula envisions the number of reproductive age women which slightly affects the coefficient.”

Main Reason Behind the Decrease in Abortions is Contraception

In 2014, the Government of Georgia introduced legislative changes against abortions. Specifically, selective abortions (in terms of the sex of the unborn baby) were banned in the following manner:  it was forbidden to learn the sex of the baby until the period when an abortion becomes illegal (abortion is legal in the first 12 weeks of pregnancy). In addition, the time period for consideration before the abortion increased from three to five days. Since 20 October 2014, sanctions about illegal abortions became stricter following amendments to the Criminal Code of Georgia.

Legislative restrictions, as well as the free healthcare programme for pregnancy and funding for childbirth, are likely to have a positive impact upon the decrease in the number of abortions. However, we are unable to offer a straightforward assertion or rejection of this idea. An induced abortion is the termination of an unwanted pregnancy and it is hard to reverse this decision by making the law more severe.

reads: “The legal status of abortion does not affect a woman’s decision to have an abortion but it is directly related to access to a safe abortion.” In accordance with the World Health Organization:  “Whether or not abortion is legally restricted, the likelihood of women having unplanned pregnancies and addressing medical services or the termination of a pregnancy is practically the same.”

In accordance with the information of the World Health Organization as well as the United Nations Population Fund, a real solution for decreasing abortions is to strengthen family planning services.

Lela Shengelia, in her interview with FactCheck, also said that the state has undertaken important steps in the direction of family planning. Specifically, medical guidelines about abortions have been developed and legislative changes have been introduced. However, as stated by Ms Shengelia: “The decrease in the number of abortions is flatly related to the increase in the usage of contraceptives.” FactCheck

tried to learn more about the effective steps undertaken by the state to improve access to family planning services.

Lela Shengelia commented: “The National Centre for Disease Control and Public Health is responsible for educating/informing the population about family planning. Currently, we are working on a website and the development of an application named Parent School and both of them will include information about reproduction issues and family planning. In addition, in the upcoming days we are going to meet with NGOs working on reproduction issues and we will develop a communication strategy aimed at increasing the awareness of the population in regard to reproduction issues, including those related to family planning.” Ms Shengelia also added that apart from the publication of different information on the website, the state has not made any specific steps towards increasing access to contraception.

“Unfortunately, many donors who used to work on the issues of contraception have already left the country. Therefore, the state starts to gradually assume this responsibility,” added Lela Shengelia.
თეგები: