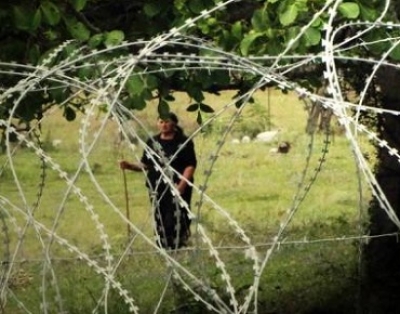 Ten Years after the War – Russian Occupation in Numbers

Ten years after the 2008 war, the Russian Federation still occupies and still continues to make

Ten years after the 2008 war, the Russian Federation still occupies and still continues to make provocations against Georgia. The most vivid examples of this behaviour are the numerous facts of illegal actions committed by the Russian forces alongside the occupation line as well as the daily terror they inflict upon the local population. The so-called “Russian border guards” detain people not only close to the barbed wire fences or sign posts demarcating the dividing line but on their land plots as well, accusing them of “illegal trespassing of the border.” Families of those citizens who are detained on such charges have to pay RUB 2,000 and this amount doubles if the “trespassing” happens again.

Russians started to detain people alongside the territories of the dividing line after the August 2008 war. Five people were detained by 1 January 2009. In the following years, the cases of illegal detentions have become more frequent. In accordance with the information of the State Security Service of Georgia[1] (SSS), there were 1,864 facts of illegal detention of Georgian citizens for illegally crossing so-called the border of occupied Abkhazia in the period of 2008 to 3 August 2018 whilst 1,180 facts of detention were registered for illegally crossing the border of the occupied Tskhinvali region. In addition, More than one times, 60 people have been detained for illegally crossing the so-called border of the occupied Tskhinvali region whilst the similar figure for the occupied Abkhazia is 53 persons. FactCheck also wrote

about these statistics last year.

As we have already noted, people who are detained for illegally crossing the so-called border are released for paying the fine in the first and second cases of the “violation” but are sentenced to several months in prisons in Tskhinvali and Abkhazia for third-time “offences.” The fact that 3,044 civilians were detained alongside the occupation line near Tskhinvali and Abkhazia in the period of 2008-2014 means that the budgets of de facto entities received at least RUB 6,088,000 to release the detained civilians which at today’s exchange rate (RUB 1 equals 0.038 GEL) is nearly GEL 231,350.

These detentions, together with other issues, are discussed by the parties at the Incident Prevention and Response Mechanism (IPRM) meetings which were established after the 2008 August war. In the past ten years, there were 88 IPRM meetings held in Ergneti and 57 in Gali.

In regard to the area of the occupied territories, according to the State Security Service data,

the area of the Abkhazian Autonomous Republic – one of Georgia’s occupied territories – constitutes 8,700 square kilometres whilst the area of the Tskhinvali region’s occupied part is 3,800 square kilometres. However, the occupation regime is not satisfied with this and continues its so-called borderisation policy, seizing new territories in the process.

In the last ten years, the so-called borderisation issue has been established as one of the greatest problems for our country. In total, 103 villages were occupied in Shida Kartli as a result of the 2008 August war with the Russian Armed Forces constantly seizing additional territories.

In accordance with the information analysed by FactCheck,

Russian occupation still continues. The sad reality is as follows: 350 kilometres of occupation line in Shida Kartli alone, nearly 52 kilometres of barbed wire and fences, approximately 350 metres between the main highway and the line of occupation, more than 3,000 civilians kidnapped from their own villages and land plots, Giga Otkhozoria and Archil Tatunashvili killed at the hands of occupiers and the Baku-Supsa pipeline and the private property of the local population ending up on the occupied side of the border. Russia still blatantly violates internationally recognised principles and Georgian sovereignty.

[1] According to the State Security Service of Georgia’s information, the average margin of error in the number of people officially identified by the Government of Georgia to be detained for illegally crossing the so-called border in occupied Abkhazia is approximately 10%-15% whilst that figure is 5%-10% in the case of the occupied Tskhinvali region.
თეგები: