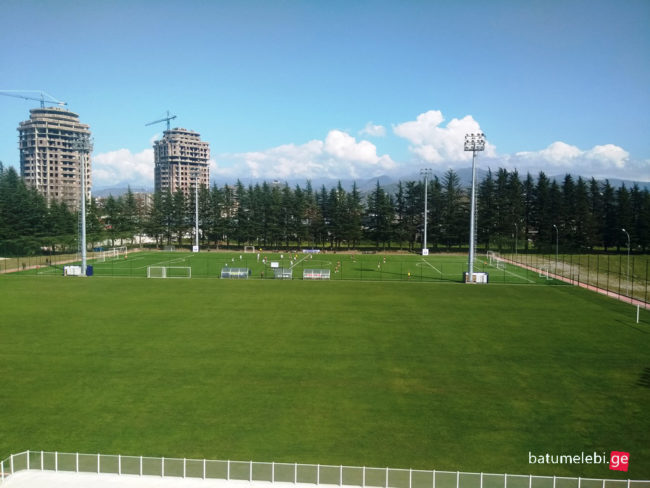 Why does Dinamo Batumi have to play domestic matches at a different field when Batumi City Hall has spent GEL 4 million for the construction of the Angisi sports base?

The Angisi sports base, which was opened four months ago with much fanfare, has become a spotlight

The Angisi sports base, which was opened four months ago with much fanfare, has become a spotlight of media attention. Questions were raised after the announcement that Dinamo Batumi was going to play domestic matches in Kutaisi even though it has two playing fields at the aforementioned sports base. It turned out that after four months since the opening of the fields, the field with natural grass and the one with artificial grass were no longer usable for playing matches.

Batumi City Hall twice announced a tender in 2015 for the construction of the sports base in the Angisi settlement. The first one ended with no results whilst Energosektormsheni LTD won the second tender. The company offered the customer a project valued at GEL 4,930,000. On 23 September 2015, Batumi City Hall signed a contract with the company (for GEL 4,899,998). In accordance with the contract, the consignor was obliged to finish

the construction of the sports base as well as the building of one natural grass and one artificial grass field in 420 calendar days by 25 December 2016.

The construction of the sports base was completed at the beginning of 2018 in violation of the agreed deadline and was opened in May. Prior to the official opening ceremony, the opposition informed the media that the consignee had taken possession of the still unfinished facility. United National Movement members claimed

that the drainage system was in shambles and water accumulated on the field during rain. Batumi City Hall responded to these allegations, commenting that in accordance with an expert conclusion, the construction work was carried out in accordance with the project.

details all of the requirements which the consignor was obliged to meet. The biggest emphasis was made on materials and equipment which would be used in the construction process. The consignee requested a prior agreement on their visual and technical characteristics (quality, texture, colour, etc.).

In accordance with the information of Batumi City Hall, the Head of Batumi City Hall’s Municipal Improvement Service underlined in an explanatory note on 1 November 2016 that the consignor was having problems in the timely completion of the construction work as well as in purchasing goods and an on-time supply of construction materials to the facility. In addition, the consignor failed to submit information about the countries and the companies producing the construction materials.

The documentation provided by Batumi City Hall includes a letter of the Director of Gzamshenproetki LTD (dated 31 October 2016) which was responsible for supervisory services. In this letter, the supervisory company advises Batumi City Hall to end relations with the consignor and impose a penalty for breaching the contract owing to particular circumstances.

The consignee revoked the contract with the consignor in November 2016. In accordance with the information published

on the website of the Government of the Autonomous Republic of Ajara, the company had already carried out GEL 1,600,000 of work by that time. In other words, only 32.65% of the total contract money had been spent in 13 months since the start of the construction project when, in fact, the facility was already to have been completed. Energosektormsheni LTD was fined GEL 240,000.

contacted Giorgi Gigineishvili who owns 100% of the shares in Energosektormsheni. Mr Gigineishvili said that: “We were stuck because when we started working on the project, it appeared that certain details were absent and that forced us to stop… Currently, Batumi City Hall has a debt to us of nearly GEL 270,000 or 280,000 for the work that we have already carried out. We have submitted conclusions from Samkharauli. The conclusion indicates that we have completed the work. City Hall’s signature is on this. This GEL 240,000 was in a bank account as the guarantee but they took it away… During the construction process, we addressed [City Hall] several times to deliver the project and move the deadline… There were some sham meetings and we were told it was not our fault and we were not to blame. However, they still did this to us.”

However, in the correspondence with Energosektormsheni LTD, Batumi City Hall Supervisory Service indicates that expecting changes in the project was not a justification to stop the entire process because there were plenty of other work activities which could have proceeded without hindrance apart from the shortcomings in the project documentation.

In March 2017, Batumi City Hall announced a new simplified tender worth GEL 4,116,170. Only one company, Monoliti 2005 LTD, took part in the tender. The consignor signed a contract

In December 2017, the Levan Samkharauli National Forensics Bureau assessed the facility and concluded that work had been carried out in a satisfactory manner and in accordance with the conditions envisioned by the contract.

In the four months since opening the facility, it was announced that Dinamo Batumi was not going to play domestic matches on its own field. The Sports Director of FC Dinamo Batumi in his interview with the media said that the field was damaged and the artificial grass field did not meet standards, probably because of drainage system problems. FactCheck interviewed other representatives of the sports base management. They say that it has already been one month since they were appointed to their positions and had no objections to the state of the facility when it was handed over to them. They blame weather conditions for the fact that water is coming into the building and explain damages on the field because of overuse. The management says that 400 children train on the field. Apart from that, Shukura Kobuleti played matches on the field because the construction of its field has not yet been completed. The management added that Monoliti 2005 LTD is working to address the shortcomings and had planted new grass on the field. They claimed that this was the reason why Dinamo Batumi had to play domestic matches in Kutaisi. In response to FactCheck

’s question as to the expediency of playing domestic matches in a different city resulting in increased expenses for the club, they replied that playing on the damaged field at the present moment would have caused even more problems.

In accordance with the latest information, the Prosecutor’s Office took interest in the circumstances of the sports base construction and plans to study the documentation.
თეგები: