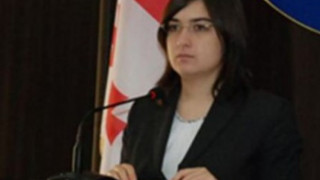 If you wanted high quality education at the Police Academy, Mr Levan [Izoria], you would not abolish competitions and academic programmes in November 2012 just a month after your government came into power

On 13 November 2013, the Georgian Parliament discussed amendments to be made to the Law of Georgia

On 13 November 2013, the Georgian Parliament discussed amendments to be made to the Law of Georgia on Higher Education. The draft bill of the amendments was presented by Levan Izoria, Deputy Minister of Internal Affairs. He admitted the importance of developing Masters-level programmes at the Police Academy in order to guarantee high quality education which means that it is necessary for the Academy to obtain the status of a higher-educational institution. According to Izoria, the amendments will not automatically grant the Police Academy the aforementioned status although they will provide the ground to apply to the National Centre for Educational Quality Enhancement. After successfully satisfying certain requirements for authorisation, the Academy will be able to obtain the status of a higher-educational institution.

The discussion on the abovementioned issue was followed by comments from the Parliamentary Minority. One of the members of the United National Movement, Chiora Taktakishvili, declared that during the last several years the Police Academy managed to transform the Soviet-style system of the police in Georgia into a contemporary law enforcement agency serving the interests of its citizens. As for the reforms being implemented at the Ministry of Internal Affairs over the past year about which Deputy Minister Izoria was speaking, Taktakishvili stated that this only concerned creating new uniforms for the policemen as well as humiliating their dignity. In this respect, she brought up the case of Melor Vachnadze who was not charged for inflicting physical violence against a policeman. Taktakishvili addressed the Deputy Minister: “If you wanted high quality education at the Police Academy, Mr Levan [Izoria], you would not abolish competitions and academic programmes in November 2012 just a month after your government came into power.”

FactCheck took interest in the competitions and academic programmes that Chiora Taktakishvili declared to be abolished in November 2012 and decided to investigate the truthfulness of the MP’s statement.

In order to find out about which competitions and academic programmes Taktakishvili was speaking, we addressed her for clarification. During the conversation with FactCheck she mentioned that in 2012 after the new government came into power the decree of the Ministry of Internal Affairs regulating the admission process on vocational educational programmes at the Police Academy was abolished. Additionally, she highlighted that without studying within the aforementioned programmes, no candidate would be approved for any position at the Ministry of Internal Affairs. According to Taktakishvili, the Ministry abolished the decree in order to designate those candidates not having passed the abovementioned programmes. Decree No. 101 of the Minister of Internal Affairs of Georgia dated 9 February 2012 regulated the admission procedures for the vocational educational programmes at the Police Academy. According to this decree, special training programmes were established for Ministry staff and candidates to be appointed to certain positions:

According to the decree, in order to be designated (positions are highlighted in the decree), candidates should have completed the appropriate training programme at the Academy. Paragraph 2 of the same decree regulated the admission procedure to the vocational educational programmes comprising the following points:

It should be pointed out that Decree No. 101, entitled Regulations for Enrolment to Special Vocational Educational Programmes and dated 9 February 2012, was invalidated by Decree No. 855 of the Minister of Internal Affairs of Georgia dated 1 November 2012. We addressed the Police Academy in order to find out the reason for abolishing the decree. The Academy’s attorney, Zurab Chkhetiani, explained that the abovementioned programmes still exist and are regulated by Decree No. 987 of the Minister of Internal Affairs dated 17 December 2012. The new decree is identical to the old one in terms of content; there are only slight technical changes in the new edition. The Academy’s website displays the statistics of the length of the vocational educational programmes and trained/retrained groups according to years.

FactCheck tried to discover what determined the 1.5 month gap between the abolishing of the old decree and the approving of the new one. Despite our efforts we could not receive any comprehensive answer from the Ministry of Internal Affairs. According to the Ministry’s representative, the emergence of the gap was due to the improvement process of the educational programmes and the abolishing of the old decree did not affect the academic process. However, in response to our remark that the new decree is almost identical to the old one and so nothing substantive has changed in terms of improving the programmes, the representative found it hard to speak in details. Naturally, the question about the designation of new candidates with insufficient training at the Ministry of Internal Affairs during the 1.5 month gap still remains.

It should be stated that the Law on Police (active during the abolishing of the aforementioned decree) regulates the designation procedures at the Ministry of Internal Affairs based upon Paragraph 11 of Article 20 and Paragraph 1 of Article 21. According to the Law, police recruits should complete special training programmes prior to or after being admitted to the police, regulated by the rules and normative documents approved by the Minister of Internal Affairs. Therefore, the recruitment process should have been terminated during the 1.5 month gap when there was no active decree of the Minister on the abovementioned special training programmes. FactCheck could not obtain any relevant information on whether or not candidates without sufficient training were designated at the Ministry. It should be pointed out, however, that provided such a precedent happened, it would be illegal as it would contradict the law.

As the research showed, Decree No. 101 of the Minister of Internal Affairs of Georgia regulating the admission process to the Police Academy was abolished after the change of government in 2012. However, on 17 December 2012, a new decree was published regulating the same issue and being hitherto active. The competitions and academic programmes still exist at the Police Academy and relevant statistics are displayed on the Academy’s website. If we take into consideration the 1.5 month gap between abolishing the old one and approving the new decree (from 1 November to 17 December 2012) and assume that Chiora Taktakishvili meant this very decree when speaking about abolishing educational programmes, we can declare that she described the situation correctly. We should also ask whether or not certain candidates without special training were designated at the Ministry of Internal Affairs during this period. The reason for abolishing the old decree is also quite obscure. Additionally, the new decree regulating the competitions and academic programmes from 17 December 2012 should also be given attention. Taktakishvili, however, did not mention the existence of the new decree. It should also be stated that she spoke only about the abolishing of competitions and academic programmes and mentioned the designation procedures only during our private conversation. We conclude that Chiora Taktakishvili’s statements: “If you wanted high quality education at the Police Academy, Mr Levan [Izoria], you would not abolish competitions and academic programmes in November 2012 just a month after your government came to power,” is HALF TRUE.