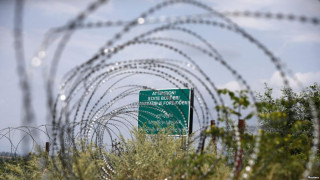 In 2018, there were 128 facts of detaining Georgian citizens registered for the allegation of so called border trespassing.

Russian occupying forces have been carrying out the so-called “borderisation” process of Georgia’s territories for years already. More and more land ends up beyond the line of occupation as Georgian citizens lose agricultural land, yards and property. In accordance with the information of the State Security Service of Georgia, 2018 was not an exception. Throughout 2018, so-called anti-fire trenches were dug around nearly the entire perimeter of the occupation line. Apart from these, there are numerous cases of the abduction of Georgian citizens. The locals are accused of so-called border trespassing and the occupation regime frees them after paying a fine. In the case of another abduction, the amount of the fine doubles.

As compared to the last years, the number of illegally detained citizens in the area adjacent to the so-called border decreased in 2018. In accordance with the information of the State Security Service of Georgia, occupying forces detained 100 Georgian citizens near the Tskhinvali border in 2018. Since 2009, this has been the lowest figure. In regard to Abkhazia, 28 Georgian citizens were abducted there in 2018.

As already mentioned, people who are detained for the allegation of so-called border trespassing are released from the occupied territories after paying a fine. The fine for the aforementioned “crime” is RUB 2,000 in the first case and if a citizen is detained second time, the abduction ransom doubles and reaches RUB 4,000. Given the number of detained people in 2018, the Tskhinvali and Abkhazia budgets received at least RUB 256,000 at the expense of kidnapping Georgian citizens which is nearly GEL 10,000 at the current exchange rate. Of note is that at the beginning of October 2018, the de facto parliament of the occupied Tskhinvali region adopted a draft law to increase the fines for border trespassing. In accordance with the draft law, the fine for border trespassing increased from RUB 2,000 to RUB 20,000. This ransom for government officials is between RUB 30,000 and RUB 50,000 whilst for legal entities it is from RUB 400,000 to RUB 800,000. As we see, the abduction of Georgian citizens has become a lucrative source of income for the occupying forces.

In 2018, a variety of notorious facts brought the conflict zone into the spotlight. Of these facts, the most troublesome were the ones of the abduction and torture of Archil Tatunashvili from Akhalgori and the abduction of Maia Otinashvili from the village of Khurvaleti.

In the course of the last decade (since 2008’s intervention of the Russian Federation into Georgia), the abduction of Georgian citizens for the allegations of border trespassing from the territories adjacent to the dividing line has been ongoing. Prior to 1 January 2009, five persons were detained for this allegation. The facts of illegal detentions have grown further over the following years. In accordance with the State Security Service of Georgia’s information, there were 1,820 facts of illegal detention of Georgian nationals in the occupied Abkhazia direction and 1,244 such facts in the occupied Tskhinvali direction between 2002 and 2018. In addition, 60 persons have been illegally detained more than once in the occupied Tskhinvali direction and the same happened to 53 persons in the occupied Abkhazia direction. FactCheck wrote about these statistics in the previous years.

Graph 1:Number of Illegally Detained Persons in the Occupied Territories for So-called Border Trespassing in 2009-2018 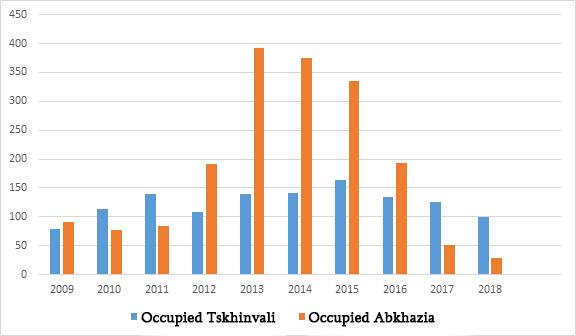 Comment: In accordance with the information of the State Security Service, the margin of error in the number of illegally detained persons is 5-10%

In total, nearly RUB 6,128,000 (which is almost GEL 240,000) were paid to the Abkhazia and Tskhinvali budgets between 2009 and 2018 at the expense of those detained for the allegation of border trespassing.