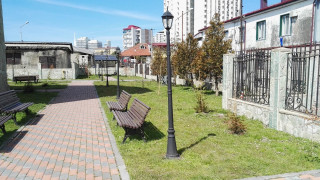 The city squares for which Batumi City Hall spent GEL 220,465 in total turned out to be churchyards

FactCheck continues its research about infrastructural projects carried out by Batumi City Hall. This time we will tell you how the GEL 102,400 which was spent for city squares turned out to be for churchyards.

On 6 December 2018, FactCheck made a request to Batumi City Hall to provide information about city squares. In particular, we asked for information about the kind of work that was being carried out for constructing city squares, the years of construction and the costs. Batumi City Hall’s reply contained data about the costs of work completed in 2016-2019 as well as data about ongoing projects for this year.

FactCheck visited the addresses provided in Batumi City Hall’s reply and found out that there is no city square adjacent to the housing block at 6a Javakhishvili Street in Batumi. This was confirmed by the inhabitants of the newly built housing block. We also did not find a city square at the crossroads of Shapatava and Marukhi Streets.

FactCheck obtained information about these tenders on the State Procurement Agency’s website. It turned out that Batumi City Hall announced a GEL 171,491 tender without auction (NAT170006338) on 8 June 2017. Four competitors entered the tender. An individual entrepreneur, Gocha Kirateladze, was the one offering the lowest price to the customer although the tender commission disqualified him and concluded a GEL 158,890 contract with Mshenebeli LTD.

The title of the contract is “State Procurement for Construction Services for a City Square at 6a Javakhishvili Street in Batumi.” The contract has been completed which means that the people living in this location should now have a green leisure space. FactCheck did not find a city square at this address although we did discover several territories which are in dire need of rehabilitation.

For the whole day of our field visit to Batumi, FactCheck sought to gain a better understanding of the situation with the help of Batumi City Hall’s Infrastructure and Improvements Service. However, Sulkhan Evgenidze, Head of the Infrastructure and Improvements Service, told us that this particular work was not carried out during his tenure and, therefore, he did not have any information. Later on, Mr Evgenidze promised to study the case. FactCheck asked him to send any of his representatives to the indicated location but he responded that all of his employees were at different locations. Further on, FactCheck tried to contact him by his mobile telephone but since he did not answer his telephone, we sent our question – whether or not there was a city square at the indicated location – electronically. Mr Evgenidze left our message unanswered. After that, FactCheck contacted the company which had carried out the construction work. However, when the director of the company learned who we were and what interests we had, he said that our voice was inaudible. FactCheck tried to contact the director several more times but his mobile telephone was already out of the coverage area.

Finally, FactCheck called the head of Batumi City Hall’s press service and told them that we were going to inquire about this issue in any case and a respective service would be obliged to answer these questions. The press service representative called us back shortly and informed us that we would find the city square indicated in the tender in the churchyard at the same territory. It was also said that Sulkhan Evgenidze would meet us as soon as possible and introduce the project (referring to the work that was carried out).

In a few minutes after that conversation, the director of the company contacted us. As stated by Nodar Beridze, when he visited the place he himself was surprised to learn that he was supposed to construct a churchyard instead of a city square. As part of the project, the company erected a fence around the churchyard, installed decorative stones and several chairs and put in modern lighting. The churchyard was constructed although the tender was announced for the improvement work vis-à-vis a city square adjacent to the housing block. As a result of amending the contract, the price was corrected and the company received GEL 102,400. If we take a look at the territory improvement plan, it is evident that the name of the tender indicated a city square although Batumi City Hall in fact planned for work on the churchyard and paid money for this service. Of interest is that the work envisioned by the contract includes the demolition of the existing fence and the erection of a new one. In addition, it also includes the demolition of the existing children’s play structure and the installation of a new one. There is only one play structure at 6a Javakhishvili Street which is not in line with standards but is not a part of the project area either.

On 6 January 2017, Batumi City Hall announced a GEL 160,000 electronic tender without auction (NAT170000128) for the procurement of construction work for another city square. The contract envisions the construction of a city square at the church territory located at the intersection of Shapatava and Marukhi Streets. There were four competitors in the tender; however, similar to the previous case, the bidder with the lowest price was disqualified and a GEL 133,995 contract was signed with Kartli LTD. The fact that a churchyard is to be constructed instead of a city square is not mentioned in either the tender announcement or in the title of the contract. The only document which reveals the true essence of the case is the project documentation prepared by Ajarkapmsheni JSC whose title page reads that construction work on a church territory is planned.

It is perfectly visible in the project that the church is standing in the middle of the project’s territory and the winner company is supposed to work on a churchyard. Of the tasks to be accomplished, there is the installation of a fence – the demolition of the old fence, the placement of a monolithic concrete base, the installation of monolithic steel-concrete cruxes for the fence, the installation of a gate and a wicket gate, the repairing of the fence wall and its surface, varnishing etc. In addition, stones were laid in the churchyard, energy efficient lights were installed and chairs were set in place. In accordance with the delivery-acceptance certificate, GEL 118,065 was paid for the work.

There is indeed a small city square at the indicated location with damaged chairs. There is a children’s play structure in the square which is built in violation of every standard. In spite of this, children still play there because they have no other alternative. At the same time, as part of the city square construction project, Batumi City Hall built a new curtain wall around the church and carried out improvement work for the internal perimeter.

FactCheck visited both locations multiple times. It is a fact that churchyards are not used for the purposes of city squares. Furthermore, people of other religious affiliations would perhaps be reluctant to enter these churchyards for leisure purposes. This means that their access to public space is limited. A further embarrassing moment for Batumi City Hall is that it indicated the construction of city squares in the tender documents when, in fact, they were for the construction of churchyards.

For the information of FactCheck’s readers, the active phase of the construction work for the churchyard fences and internal perimeters coincided with the 2017 local elections period – contracts were signed in February and July and in both cases the projects had to be completed in 90 calendar days. However, deadlines were violated and the final delivery-acceptance occurred in November and December.