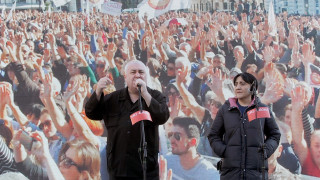 Russia does not / cannot directly suggest a pro-Russian policy because under the occupation of Georgia’s territories it is hard to find supporters. Instead, Moscow offers false neutrality.

Recently, the members of the Alliance of Patriots of Georgia have been dynamically pushing forward the idea of Georgia adopting a military non-alignment status. In order to realise this initiative, the party has announced street rallies in June 2019.

The leaders of the Alliance of Patriots of Georgia consider this initiative within different contexts. For instance, Ada Marshania called upon the Georgian population to become a member in the “military non-alignment” organisation and stated: “Georgia, similar to 140 nations, should join the famous international organisation – the non-aligned movement. After the UN, this organisation is the most representative, largest and most famous in the world.” In contrast with Ms Marshania, whilst speaking on the non-alignment issue, Irma Inashvili emphasises state neutrality and states: “Today, models of Austria, Sweden, Finland and Switzerland are unique for Georgia. We do not need any country’s military base in Georgia.”

FactCheck took interest in how relevant it is to push forward these kinds of initiatives in Georgia’s political agenda.

At the very start of its establishment, the Non-aligned Movement declared that it was not going to play a passive role in international politics, will have a strictly determined formal analytical policy, will not be aligned with any of the power poles[2] and will protect the national interests of the member countries. During the Cold War, countries willing to obtain membership in the Non-aligned Movement first and foremost had to decline membership in any military alliance. However, despite this requirement, Non-aligned Movement member countries were supporting either the US or the Soviet Union at different times.

The end of the Cold War and the emergence of the new international order rendered the existence of the Non-aligned Movement practically meaningless and brought its relevance into question vis-à-vis present world challenges. Eka Akobia, a specialist of international relations, confirms this and notes that after the break-up of the bipolar system, the Non-aligned Movement was transformed into a pure formality which is largely confined to being a talk-shop and organising summits whilst their events often bear an anti-American and anti-Western character.

Of note is that the concept of the Non-aligned Movement sharply differs from a country’s neutral status.As per the widely accepted definition, neutrality is a legal state of a country which is recognised by other nations. Otherwise, it cannot be internationally guaranteed. As clarified by Zurab Davitashvili, a specialist of international relations, a country should meet several criteria when making a declaration of neutrality in order to make sure that other countries recognise its neutral status. In particular, according to Mr Davitashvili’s assessment, first of all a country which aspires to have neutrality should not be in the geopolitical interest of a big power, should not belong to the sphere of influence of any country and should not have problems of territorial integrity or separatism. In addition, a country with guaranteed neutrality should be economically strong to provide for itself and maintain a strong and well-equipped army.

Given each of these components, Switzerland is a perfect example and its neutral status cannot be affected by changes in government as opposed to the status of Non-aligned Movement member countries which may change their approaches as a result of changes in their governments. Similar to Switzerland, we can also discuss the status of Austria, Sweden and Finland.

Austria declared permanent neutrality in 1955 based on the Austrian State Treaty. Under the permanent neutrality, Austria committed itself not to interfere in existing or potential armed disputes between different countries, not to join a military alliance or bloc and not to deploy armies and military bases of foreign countries on its own territory.

Sweden’s status as a neutral country is based more on political tradition rather than on a specific treaty or agreement.

In regard to Finland, it declared neutrality after World War II based on the 1948 Agreement of Friendship, Cooperation and Mutual Assistance with the Soviet Union. This agreement banned any state from attacking the Soviet Union through the territory of Finland. The 1960 UN speech, delivered by the American diplomat, Livingston Merchant, solidified US recognition and respect toward Finnish neutrality. Of note is that despite their status, Finland and Sweden are important NATO partners and both of them participated in the Resolute Support international mission in Afghanistan. These countries regularly take part in NATO military exercises and have joined the global coalition fighting the Islamic State.

Naming the aforementioned countries, let alone Azerbaijan, to provide arguments for the initiative of joining the Non-aligned Movement is a manipulation of facts by the Alliance of Patriots of Georgia. In contrast to the Scandinavian countries, Georgia, Moldova and Ukraine are post-Soviet nations. These three countries share a similar historical and political context. Therefore, it is more appropriate to discuss the cases of Ukraine and Moldova in this context even though the members of the Alliance of Patriots of Georgia do not speak about them.

The former President of Ukraine, Viktor Yanukovich, abandoned NATO integration at the very beginning of his tenure when on 1 July 2010 he declared Ukraine’s non-bloc status at the legislative level and put the country’s non-aligned status as a cornerstone of his foreign policy. The former President eventually declined to sign the EU-Ukraine Association Agreement which brought light to the fact that the declaration of Ukraine as a non-bloc country was in Russia’s long-term interests and envisioned not only a rejection of membership in the military alliance but abandoning EU integration as well. Of note is that Ukraine’s non-bloc status did not prevent Russia from annexing Crimea in March 2014. Finally, in light of the events in Ukraine and after the changes in government, Ukraine’s Verkhovna Rada abolished the country’s non-bloc status at the initiative of the then President Petro Poroshenko on 23 December 2014.

In regard to Moldova, according to Article 11 of the 1994 Constitution, the country declared neutrality in hopes of settling the Transnistria conflict. The neutrality passage also includes the banning of the deployment of a foreign country’s troops on Moldova’s territory. However, despite this passage, Russian troops are still deployed in Moldova. Ineffective neutrality makes Moldova more vulnerable and brings the possibility of settling the conflict into question whilst the constitutional passage about permanent neutrality only remains as a formal status. Zurab Davitashvili believes that formal neutrality serves as a certain weapon in the hands of a potential aggressor which has happened multiple times, including in Georgia during the years of the first republic. In accordance with the treaty signed on 7 May 1920, Georgia adopted neutrality although this did not prevent the Russian army from annexing the country on 25 February 1921.

As the examples of the so-called non-bloc countries as well as the theoretical and practical instances of neutrality demonstrate, neutral status is not attainable for countries similar to Georgia which have unfavourable economic and military capabilities, are in difficult geopolitical situations and are considered as a spheres of influence of a big power – in this case Russia.

The push for Georgia’s declaration of non-bloc status is clearly a part of the Russian propaganda and it has repeatedly been brought to the agenda before which is reflected in the results of national polls. This issue is dangerous for Georgia as a NATO aspirant country. Bringing the issue of neutrality to the political agenda implies drastic changes in foreign priorities and a revision of the desire of the Georgian population to see Georgia as a member of the North Atlantic Treaty Organisation.

It can be said that Russia does not / cannot directly suggest a pro-Russian policy because under the occupation of Georgia’s territories it is hard to find supporters. Instead, Moscow offers false neutrality, which can be theoretically attractive, but in practice is unattainable for Georgia whilst the cases of Ukraine and Moldova serve as proof that Russia can ignore the neutral status and carry out its aggressive intentions and actions. Therefore, the formal adoption of neutrality will not help Georgia solve the conflicts and strengthen its security.

[2] Western camp and the Soviet Union.

Alliance of Patriots of Georgia