Resume: In the last five years, Georgian Railway closed the last three accounting periods – 2015, 2017 and 2018 with a loss whilst the total loss in these five years amounted to GEL 1.03 billion. Of that amount, the loss registered in 2018 was GEL 716 million. Therefore, that part of Otar Siradze’s statement is correct at first glance although there are some questions about the origins of the loss registered in 2017. In particular, in 2017, Georgian Railway recognised the assets created in 2010-2012 as part of the railway bypass project as wasted assets. The aforementioned impairment loss amounted to GEL 382.6 million. Georgian Railway would have closed 2017 with a GEL 28.5 million profit instead of a loss had this decision not been made.

In regard to Giorgi Kakauridze’s statement, his claim that the asset impairment loss in 2018 is similar to that in 2017 which, in fact, is true. However, as opposed to 2017, the loss recognised in 2018 is directly linked to Georgian Railway’s operational and financial indicators. In particular, it is linked to a significant worsening in cargo turnover and profitability and so portraying this loss as only a technical accounting factor is unjustified. We must also take into account the fact that excluding the impairment loss, Georgian Railway would have made a small profit in 2017. In 2018, Georgian Railway’s loss was not stipulated by a “one-off registration” only. In the second part of the statement, the Deputy Minister of Finance correctly indicates Georgian Railway’s decreased margin of profit since the EBITDA margin had a decrease trend in 2014-2018 and dropped from 49.2% to 36.9%. However, it was not only in the “last two years” that Georgian Railway closed with a loss. Apart from 2017-2018 losses, Georgian Railway registered a GEL 65 million loss in 2015, too.

On air on TV Mtavari Arkhi’s broadcast, a member of the United National Movement, Otar Siradze, made a statement in regard to the losses of state companies: “Georgian Railway is on the verge of a catastrophe and is almost bankrupt. Its losses in the last year [of 2018] were GEL 716 million and losses in previous years amount to GEL 1 billion. The reason is that Ivanishvili’s clan informally rules Georgian Railway with corrupt deals.”

On the same issue, during the sitting of the Budget and Finance Committee of the Parliament of Georgia, Deputy Minister of Finance, Giorgi Kakauridze, stated that in the case of the railway the loss was stipulated by registering a USD 220 million loss as a lump sum. When asked a question about how many times registration took place and why the railway was operating at loss for five years, Mr Kakauridze answered that two such lump sum registrations took place. The Deputy Minister of Finance also clarified that the railway had not been operating at loss in the last five years and the margin of profit decreased with an actual loss registered only in the last two years.

Given the lack of confirmed information about possible corruption deals, FactCheck refrains from an analysis the aforementioned part of the statement and limits itself to an analysis of Georgian Railway’s financial and operational figures alone.

As illustrated by Graph 1, Georgian Railway’s net profit declined throughout 2007-2009. In the post-crisis period, this indicator kept a growth trend and peaked (GEL 174 million) in 2011. In 2012, the net profit indicator dropped to 97 million. In the next periods, the trend of a decline in profitability was maintained whilst Georgian Railway’s net profit became negative (loss) in 2015 for the first time since 2007. In 2016, the company’s net profit amounted to GEL 65 million. In 2017-2018, the loss amounted to GEL 354 million and 717 million, respectively. Georgian Railway has been operating at loss according to the data for the first six months of 2019. In regard to the margin of profit, there is clear general growth trend in 2007-2015 with periodic points of deviation. In 2015-2018, the adjusted EBITDA[1] margin had a clear-cut trend of decrease and 36.9% registered in 2018 is the lowest figure of the entire period.

In accordance with the financial report, Georgian Railway’s operational profit as well as its net profit are negative (loss) and amount to GEL -285.5 million and GEL -354.1 million, respectively, in the 2017 accounting period. However, these figures are due to “accounting” reasons with the real reason being the eventual scrapping of the railway bypass project instead of the company’s operational activity in 2017 or other recent years.

When calculating an organisation’s profit, asset amortisation and impairment loss (depreciation) together with other expenses have to be subtracted from the total income. For instance, if Georgian Railway purchases a metro car for GEL 100,000 and uses it for ten years, GEL 10,000 in amortisation costs will be subtracted annually from the income and, therefore, the net profit will decrease in the same amount. However, if after purchase Georgian Railway discovers that it is impossible to use the metro car and writes it off, the car’s total value will be subtracted from that year’s income (expenses distributed for many years are registered in one year). The same happened in 2017. In particular, the total balance value (the total sum of the goods and services needed for the project) of the Tbilisi railway bypass project was GEL 397.3 million. When the project was in progress, Georgian Railways planned to use the aforementioned assets in the future and receive income from those assets in the next few years. Therefore, that sum of money should have been subtracted from Georgian Railway’s profit and distributed over several years. However, the project was halted in 2013 and its future was uncertain up until 2017. In 2017, Georgian Railways made a final decision that implementing the project was no longer its objective and had to write-off those assets.

In standard cases, assets are sold and the difference between the income after selling and the balance value constitutes a loss or a profit (depending which is more). However, the money spent (balance value) can usually not be fully offset and the entity shows a loss. Given the specific characteristics of railway infrastructure (bridges, roads and roadwork which cannot be used otherwise and have no respective value), it is very hard to sell it profitably for other purposes if not used as initially intended. In this case, it was evident that selling assets profitably was impossible or expenses incurred for selling them exceeded the incomes from selling with the exception of land plots. Therefore, the difference between the theoretical income (GEL 14.7 million) from selling the assets and the balance value of the total project (GEL 397.3 million); that is, GEL 382.6 million, was recognised as impairment loss and subtracted from the incomes of 2017. Without that expense, the railway’s profit was GEL 28.5 million in 2017.

In essence, the aforementioned GEL 382.6 million loss is not related to Georgian Railway’s activities in 2017 and the project funds were not spent in the given period (project implementation started in 2010 and continued until 2013). It was only for technical reasons that it was reflected in the 2017 financial report. Any discussion on the loss as a result of attempting to implement the project goes beyond the scope of this article. However, the reasons behind the loss could be an erroneous calculation under the previous leadership or the failure of incumbent leadership to properly continue the project.

Of note is that together with the actual transported cargo, it is also important to note the distance over which the cargo is transported. The aim of increased transport cargo is to receive increased income. Therefore, the further distance is the cargo is transported, the higher the income. In other words, the cargo turnover measure in ton to kilometres is a more informative figure as compared to only the mass of the transported cargo alone. As illustrated from the graph, this figure has a clear decreasing trend in 2014-2018 and dropped from 4.9 tons from 2.6.

It was against the backdrop of a permanently decreased cargo turnover and a drop in incomes that it became necessary to carry out a depreciation test on the company-owned assets. As a result, the company-owned assets have been revalued and their total value decreased by GEL 691 million vis-à-vis their balance value (the assets have lost their value). In accordance with accounting standards, a depreciation is a loss and is documented in a profit-loss report. At the same time, the expenses incurred from asset depreciation amount to GEL 691 million and the loss constitutes GEL 716 million. Even without such an expense, Georgian Railway’s loss in 2018 is GEL 25 million.

[1 ]An abbreviation of:Earnings Before Interest, Taxes, Depreciation and Amortisation. 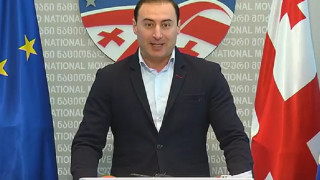