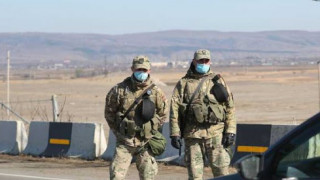 Since 23 March 2020, strong restrictions have been imposed over Bolnisi and Marneuli

Currently, there are 81 confirmed cases of the novel coronavirus in Georgia. Of that amount 13 patients have already recovered whilst 247 remain in hospital under medical supervision and over 4,500 are quarantined, not including the Marneuli and Bolnisi municipalities where strong restrictions have been imposed since 23 March 2020. Bolnisi and Marneuli were put under lockdown after a woman from Marneuli tested positive for the novel coronavirus. Reportedly, the woman attended a first-year death anniversary commemoration which was also attended by people who came to Marneuli from Bolnisi.

According to the information of the National Centre for Disease Control (NCDC), nearly 80 persons were surveyed in those two municipalities, including their close contacts and all potential cases. The NCDC assumes that currently there are no widespread cases of the coronavirus in Marneuli. The rapid testing kits, which China delivered to Georgia, will be used in Marneuli and Bolnisi for the first time.

People under lockdown are urged to stay home and follow recommendations to prevent the spread of the coronavirus. The announcements there are bilingual.

The decision of the authorities to put these municipalities under lockdown vividly exposed the problems afflicting some people in Bolnisi and Marneuli. In particular, this refers to villages such as Tsereteli which have been suffering for year from a lack of clean water.

Vladimer Chkhitunidze, a village local, stated: “They issue recommendations to wash hands often. This is one of the recommendations to fight the coronavirus. However, the village gets running water three times per week and it is difficult to properly follow this advice. The village of Tsereteli is linked to Marneuli. This is quite a big village and people seek to economise the water they collect. Maybe now is the time to take some measures and solve this problem which is afflicting many villages in the Marneuli municipality.”

The declaration of the lockdown gave mountain villages another concern in terms of food and medications. Nona Samkharadze, a local activist, says that people in the village of Khikhani (populated by ecomigrants from Ajara) have been actively contacting her recently and asking for mediation with respective bodies.

Ms Samkharadze stated: “Since stopping public transport, the villages are in fact cut off from the centre. Some of the villages have neither grocery stores nor pharmacies. People from Khikhani call me every day to say there are no shops, they have no cars and are unable to go to buy anything. There are 32 large families and the rest of them are mostly elders. They need medicine and there is no pharmacy in the village. Villages with small shops have a really limited choice and people cannot really buy anything there.”

Some of the people consider the declaration of a lockdown to be a right step and state that prior to this, it was total chaos. The movement of people was out of control. As stated by local journalists, the situation is further aggravated by the language barrier.

Tiko Davadze, a local journalist, states: “As you are aware, ethnic Azeris constitute 85% of Marneuli’s population. Of them, the majority cannot speak Georgian. That part of the population was late to realize what was happening around them. Since the declaration of the state of emergency, they were still jokingly referring to the coronavirus. They were getting together, did not follow the isolation rules. Not before we were standing face to face with a specific problem, could we understand the magnitude of the danger. Although the local media circulates information in the Azerbaijani language, too, these people still remain nihilistic on some issues. Currently, threat awareness has been notably increased and in spite of the problems, they try to be in self-isolation as best as they can.”

In regard to the situation in Bolnisi, locals from there were also caught off guard by how the events unfolded. According to the latest report, one of the locals (a pregnant woman) tested positive for the coronavirus which pushed the population to become more cautious and follow the self-isolation rules. As a result of the lack of access to food, some rural families started to ask for help from their friends and relatives in town. Buyers flocked to the shops on the night when the lockdown was declared and the next day to stock up on some food supplies. After the people started to self-isolate, they are speaking remotely about the problems with local activists. They say that for two days they could not even buy bread. The elder people of the Azerbaijani community, who have neither internet access nor read the Government SMSs (on the existing situation) which customers there also received in the Azerbaijani language, were put in a particularly difficult situation.

Mariko Tsikoridze, CENN local coordinator, says: “On 23 March, Bolnisi indeed awoke with a shock. I was personally explaining to some of the people what was happening and what we were supposed to do. We saw that to translate something and circulate it in an electronic form is not sufficient. Some of the people are illiterate, they have no internet and do not watch Georgian TV channels. Therefore, with the involvement of different organizations, information in the Azerbaijani language on self-isolation and personal hygiene will be printed and posted in the streets.”

Local municipality employees have distributed information leaflets in the Georgian and Azerbaijani languages door-to-door. In parallel, disinfection work is being carried out in town.

As stated by Kvemo Kartli regional administration officials, they keep constant contact with the population and pay relevant attention depending on the particular need.

The Governor of Kvemo Kartli, Shota Rekhviashvili, stated: “Currently, there is food and medicine in both municipalities. We have received 10,000 face masks and distributed them in the municipalities. In regard to local business, they keep working as best as possible and some people continue to work in observance of the specifically prescribed rules.”

After the declaration of the lockdown in the Marneuli and Bolnisi municipalities, mass medical testing of the health conditions of the local population was begun. Until now, 15,000 people have been tested for raised body temperature in Marneuli although the coronavirus as the cause was ruled out. There were 3,400 people tested in the Bolnisi municipality and, as stated by the governor, no complications were found there.

According to the information of the local authorities, medical workers are assessing the general health conditions of every local. In the case when people show coronavirus symptoms, they are taken to the Marneuli field hospital and their family members are put into strict self-isolation.

This situation particularly harmed those people in Kvemo Kartli who were vendors at Tbilisi and Rustavi markets and depended on this activity for their daily income. Some locals believe that the declaration of the lockdown was important because, according to them, unfettered travel from Turkey, Azerbaijan and Russia was continuing and this was beyond control vis-à-vis the spread of the coronavirus. Otherwise, they claim, it would be impossible to have so many people coming for Novruz Bairam which is celebrated in Kvemo Kartli on 21 March. Almost all families in Bolnisi and Marneuli have relatives in the aforementioned countries who visit Kvemo Kartli specifically for the Novruz Bairam holiday.

Currently, people under lockdown cannot make forecasts in regard to the future economic and social circumstances in the regions. However, they say that their job is agriculture and they will come back to that immediately once this situation ends.