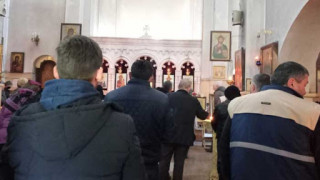 Freedom of Belief and Religion in Light of the Novel Coronavirus

The President of Georgia, Salome Zurabishvili, signed a decree to declare a month-long nationwide state of emergency in Georgia

On 21 March 2020, the President of Georgia, Salome Zurabishvili, signed a decree to declare a month-long nationwide state of emergency in Georgia.

On 21 March 2020, the President of Georgia, Salome Zurabishvili, signed a decree to declare a month-long nationwide state of emergency in Georgia to reduce threats coming from the novel coronavirus (COVID-19) and for the better management of the crisis situation.

According to the President’s decree, several constitutional rights, including the freedom of assembly envisioned by the Article 21 of the Constitution of Georgia, are restricted for the duration of the state of emergency. The decree reads that any assemblies, demonstrations or gatherings are prohibited with the exception of specific cases as determined by the ordinance of the Government of Georgia. In regard to that restriction, the Prime Minister of Georgia, Giorgi Gakharia, stated that the gathering of more than ten people would be prohibited and this prohibition would apply to everyone and everything including the church. The Prime Minister stated: “The restriction of assembly applies to everyone and everything and it is aimed to take care of the health of our citizens. The main objective of the Government of Georgia is to take care of the health of our citizens regardless of their religious beliefs.”

In contrast to the Prime Minister, the Speaker of the Parliament of Georgia stated the same day that the restriction of the freedom of assembly does not apply to the right of religion and belief. However, Archil Talakvadze added that given health rights and public health tasks, the government, the Prime Minister and health services will have the Parliament’s political support if they decide to impose restrictions on other rights.

In addition with other harsh restrictions, economic activity was limited in the country and a big part of the population has been left without an income. Furthermore, because of the virus’s internal transmission cases, the Marneuli and Bolnisi municipalities were put in under a full lockdown.

Freedom of Belief and Religion and its Restriction

A person’s right to have any belief (either religious or non-religious) is absolute which means that restricting this freedom is not allowed. However, a person’s right to manifest his belief by way of worship and practiceindividually and separately or with others in public is not absolute since the manifestation of a religious belief might affect others. Restrictions can only be put on the external manifestation of belief if it is envisioned by the law, necessitated by public safety interests in a democratic society or is needed to protect public order, health or the morals, rights and freedoms of others as stipulated by international standards.

Article 16 of the Constitution of Georgia enshrines the freedom of belief, religion and consciousness and these rights may be restricted only in accordance with a law for ensuring public safety or for protecting the health or the rights of others insofar as is necessary in a democratic society. In addition, the grounds for the restriction of the external manifestation of the freedom of belief and religion have to be clearly defined whilst the restriction should be commensurate with the public interest which it serves to protect.

In this situation, when the state of emergency has been declared in the country to counter the novel coronavirus and many human rights are restricted, it is vitally important to temporarily suspend the right of participation in collective religious worship.

Restricting the freedom of belief and religion by the President’s decree under the state of emergency or martial law is not allowed. Therefore, legislative amendments have to be immediately enacted.

On 23 March, NGOs and lawyers published a joint appeal to the legislative and executive authorities to enact respective amendments and noted that restrictions imposed on the freedom of the expression of religion and belief should meet the relevant national and international standards. In addition, the measures adopted and the actions provided should be envisaged by the law, serve the legitimate goals of protecting the health of others and meet the strict criteria of necessity and proportionality of a democratic society. The authors of the appeal believe that an authorised office should issue a relevant by-law within a defined period of action and subject to the conditions provided in Article 16 of the Constitution of Georgia for the purposes of the enforcement of the requirements of Article 5 of the Law of Georgia on Public Health. Moreover, if necessary, the Parliament of Georgia should make amendments and additions to the Law of Georgia on Public Health in an accelerated manner.

Of note is that many religious bodies in Georgia have in some form stopped or temporarily suspended public worship and religious rites. Multiple Orthodox churches, including the Ecumenical Patriarchate, followed suit. Even the Supreme Leader of Iran has talked about the necessity of restricting religious gatherings and called on everyone to observe the prohibitions imposed because of the coronavirus pandemic. The position of the Georgian Patriarchate is as follows: “Whoever refuses to take communion from a shared bowl, refuses the saviour!” Of note is that in spite of being adamant about the communion rule, the Patriarchate called on parishioners to observe social distancing and follow other recommendations issued by the National Centre for Disease Control (NCDC). Taking the NCDC recommendations only partially makes the position of the Georgian Orthodox Church inconsistent. In addition, it is unclear what aim the Church’s approach serves.

Some theologians and clergymen have commented upon the position of the Georgian Patriarchate. In accordance with the joint statement: “All three traditional forms of communion: from a spoon, by hand and intinction (dipping bread into wine) means administering communion from a single bowl. Therefore, the “demand to refuse a shared bowl” is a pure interpolation and displays the trend of a misrepresentation of the issue... If the restriction on attendance at a church worship is “unjustified and a crime against the God” as mentioned in the statement, this means that the large majority of Orthodox churches all over the world are committing a unredeemable crime which is an acute accusation pressed against the body of the Orthodox church.”