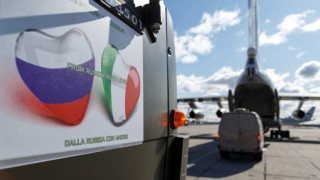 Russian Aid for Italy – Altruistic Assistance or an Instrument for Spreading Propaganda?

In light of the coronavirus pandemic, Russia sent medical assistance to Italy labelled as “From Russia with Love.” It is notable that it was Russia’s Ministry of Defence, not the Ministry of Health, which spearheaded the mission.

In light of the coronavirus pandemic, Russia sent medical assistance to Italy labelled as “From Russia with Love.” It is notable that it was Russia’s Ministry of Defence, not the Ministry of Health, which spearheaded the mission.

Russia launched a disinformation campaign prior to the shipment of the medical assistance. As part of the campaign, Moscow sought to illustrate the impotence of European countries in tackling the pandemic, on the one hand, and emphasise the EU member states’ lack of solidarity and support for Italy, on the other hand.

In light of the West’s resolute fight against the spread of the coronavirus and the resulting health, economic and social problems, Russia tries to exploit the world pandemic-induced crisis in its own interests. Moscow still uses medical shipments to virus-affected European countries for disinformation purposes.

High-ranking Russian military officers accompanied the Italy-bound humanitarian aid in March. Moscow used these cadres to demonstrate that it was the Kremlin which extended a helping hand to Italy whilst the latter was abandoned by NATO and EU in its plight. Russian state media provided broad coverage of the movement of Russian vehicles in Italy. For instance, the government-controlled TV Channel One Russia aired information entitled as: “Russia’s Military Convoy Moves on NATO Military Highways.” Russian media was also actively covering an Italian citizen pulling down the EU flag and replacing it with the Russian one. The flag had the following caption – “Thank you Putin.” However, it was later reported in the Italian media that some people were paid EUR 200 to record videos of gratitude.

According to the EU disinformation monitoring service, EUvsDisinfo, false narratives that are promoted in regard to the aforementioned issue are as follows:

• The EU is not ready to provide urgent support to its member states – for instance Italy – instead, they have to rely on external support

The narratives have been circulated by Georgian online media outlets which promote pro-Russian propaganda. For instance:

• Coronavirus does not kill people in Italy, in fact it is being punished by the EU

In this case, too, Russia aims to discredit the West. However, its domestic political objectives might also be in play. The display of Russia’s glory and compassion on the international arena also intended to shift focus from the growth of coronavirus (COVID-19) cases in Russia. Raffaele Marchetti, Professor of International Relations at Rome’s LUISS University, speaking on Russia stepping up its efforts in light of the coronavirus, stated: “By sending aid to another country, Russia is seeking to redraw global hierarchies. Sending help creates a hierarchy. The country that accepts aid shows that it is weaker and cannot cope.”

A number of political parties claim credit for striking a deal with Russia on sending aid to Italy. These parties are: the Ruling coalition member, the anti-establishment 5 Star Movement and the German ultra-right party Alternative for Germany which assert that it was Italy’s pro-Kremlin Lega Party that contacted them.

Some people in Italy regard Russia’s aid as a “Trojan Horse.” More than 15,000 signatories addressed the authorities with a petition requesting the unveiling of the agreement details.

Shortly after Russia delivered medical aid to Italy, the media started to report about its real value.

POLITICO questions the value of the Russian aid itself. Russia provided 300,000 face masks to Italy whilst Germany and France each provided two million face masks. The Bergamo field hospital, where Russian medical personnel currently work, is 80% empty (EU member states have also sent health workers to Italy). As reported by Italy’s La Stampa, 80% of Russia-sent aid to Italy is useless. It is hard to confirm or deny that report, although as the aforementioned sources report, the bulk of aid constituted disinfectants which Italy did not lack whilst critically needed equipment was very few in number within the Russian shipments.

Based on military sources, Italian media also reported that the real purpose of the Russian mission is intelligence-gathering. However, as stated by the professor at LUISS University, the Russians were only able to extract medical information on best practices as well as train its doctors for the epidemic in Russia whilst Russian personnel in Italy have remote chances to gain any military intelligence.

Naturally, it is important for the Kremlin to gain friends in Europe in order to remove the sanctions imposed in the aftermath of the 2014 annexation of Crimea and sending aid to Italy also serves this purpose. Italian media has started open discussions on this issue and questions were raised about what Russia would receive in exchange for the assistance it provided. The Italian Prime Minister Giuseppe Conte denied the allegations and stated that support to remove sanctions on Russia is not part of the deal.