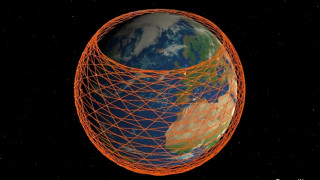 Disinformation on Starlink: 5G Chain was Placed Around the Earth

According to the Space X project, the aforementioned satellites will deploy a global internet network to provide internet anywhere on Earth.

On 26 April 2020, dozens of bright objects appeared across the Georgian sky. These bright objects were satellites of billionaire Elon Musk’s Space X company and they were noticed over the skies of several countries. On 22 April 2020 Space X launched another 60 Starlink satellites on Earth’s orbit and their total amount increased to 422. There are still plans to launch additional satellites into space with their number increasing to 12,000 by the end of the project. According to the Space X project, the aforementioned satellites will deploy a global internet network to provide internet anywhere on Earth.

Those circulating conspiracy theories about the coronavirus and 5G in Georgia used the appearance of the satellites to produce new conspiracy theories and disinformation (see FactCheck’s article – Disinformation Linking 5G to the Coronavirus). Koba Kuprashvili, who has a large audience in social networks, claims that the coronavirus is an instrument to divert people’s attention and whilst “we were discussing mortality and the harmlessness of the coronavirus, Elon placed such a 5G chain around our Earth that nobody will be able to hide or escape from it.” Mr Kuprashvili links the “burning down” of forests in Siberia, the Amazon jungles and Australia to this fact. At the time of writing this article, his Facebook post had 812 reacts, 753 comments and 997 shares. The post was also shared in the Facebook group STOP 5G GEORGIA!!! which has nearly 17,000 users and one of the administrators is Mr Kuprashvili himself. There are 679 reacts, 583 comments and 495 shares of the identical post published in the group. Mr Kuprashvili concluded that launching satellites into orbit was “placing a snake circle around the Earth.” 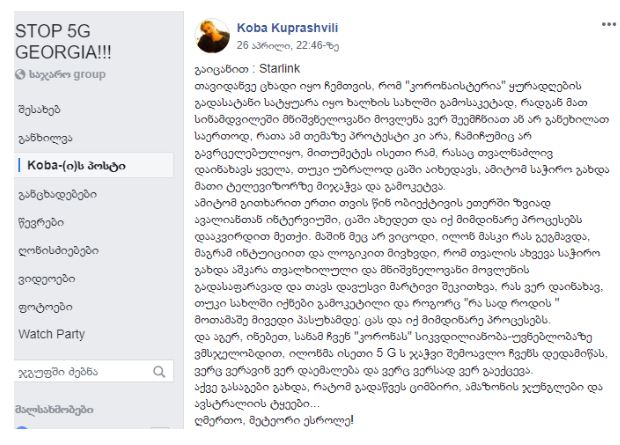 For me, it was obvious from the beginning that the “coronahistery” was a decoy to lock people up in their homes so that they would not at all notice or actually discuss this important event and to make sure people keep mum, let alone protest, especially on such a topic which is crystal-clear to anybody who looks up into the sky. This was the reason why it was needed to tie them to their TV sets and lock them up in their houses.

This is why I told you a month ago, on air on TV Obiektivi in an interview with Zviad Avaliani, to look up into the sky and observe the processes there. I myself did not know what Elon Musk was up to, but through intuition and logic I got that blindfolding became necessary to conceal this clearly visible and important thing and I asked myself a simple question: What would you not see if you remain locked in the house and as a player of [the television game show] “What, Where, When” I came to an answer: The sky and the processes up there. So, there you are, whilst we were discussing mortality and the harmlessness of the coronavirus, Elon placed such a 5G chain around our Earth that nobody will be able to hide or escape from it. It also became clear why Siberian, Amazonian and Australian forests were burned down.

God, strike him with a meteor!"

Lali Moroshkina also promotes conspiracy theories about the coronavirus. If previously she sought to link the installation of 5G towers to the spread of the coronavirus and the scale of the infection, this time Ms Moroshkina claimed that the coronavirus (COVID-19) was a media project to enable the installation of satellite towers. Her explanation of the need for inventing the pandemic is as follows: “Certainly, neither Elon Musk nor Bill Gates were able to stop flights in order to install the new satellite towers since navigation systems impede the placement of satellite nets which we clearly witnessed yesterday.” Ms Moroshkina opines that mankind was deceived and in a year we will be able to discuss the identified impact of the satellites on health, leukaemia and cancer. Lali Moroshkina’s Facebook post has 306 reacts, 78 comments and 128 shares.

STOP 5 G GEORGIA!!! also promotes disinformation based on a Russian source as well. The source claims that the pandemic does not exist, it was “thrown in” to launch the Starlink satellite and after Starlink and 5G we will lose our lives. This Facebook post has 221 reacts, 47 comments and 200 shares. 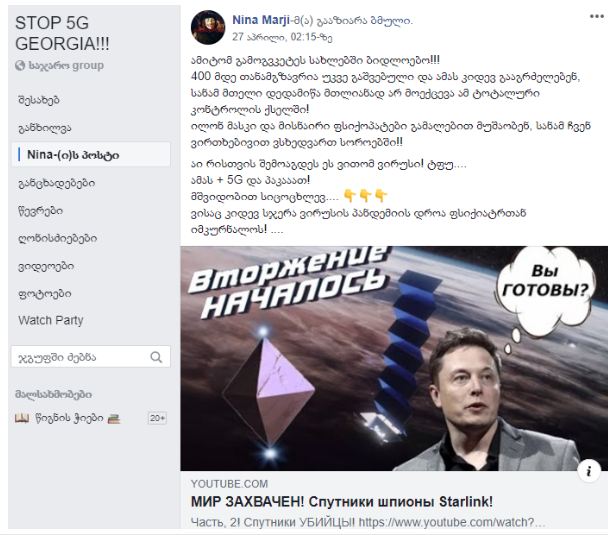 "This is why we were locked in our houses, morons!

Around 400 satellites have already been launched into space and they will continue to do so until the whole Earth is fully under this total control network!!

Elon Musk and psychopaths like him are working hard whilst we are sitting in holes like rats.

This is why this so-called virus was “thrown in”! Damn…

If someone still believes in the virus pandemic it is time to start seeing a psychiatrist!"

In fact, the Starlink project was announced in 2015. The first satellites were launched as early as 22 April 2018 and prior to this date their number increased to 362. Therefore, it is illogical to assert that by inventing the pandemic people were “locked up” in their homes to make the launch of the satellites possible.

It is also wrong to link Starlink satellites with 5G towers. The 5G signal is transmitted at quite a small distance. Therefore, it is necessary to install many towers close to each other. 5G will be effective in densely populated cities although not in rural areas. Starlink is more suitable to internetise such places. Starlink is neither Wi-Fi nor 5G. Special receivers will be needed to receive Starlink’s internet.

Linking Starlink’s satellites to expected health problems and the assertion that Starlink and 5G take our lives is disinformation. This conspiracy theory is not based on any scientific evidence and, moreover, it goes against the laws of physics. 5G, which transmits within the range of 30-300 gigahertz, is safe for human health (see FactCheck’s article: “Disinformation Linking 5G to the Coronavirus”).

In regard to Starlink, according to the authorisation of the Federal Communication Commission, Starlink uses waves within the range of 10.7 gigahertz to 30 gigahertz. As we see, Starlink’s waves are lower as compared to 5G waves. Starlink does not use new waves and, therefore, it cannot have an effect which would be different from already existing devices. Waves within the 10 to 30 gigahertz range are radio waves which are used both for TV and radio broadcasts. These radio waves emit only non-ionised radiation, meaning they cannot harm RNA within cells. In the 10-30 gigahertz range, there is not enough energy to break chemical bonds or remove electrons when in contact with human tissue. Therefore, 5G radio waves do not break chemical bonds or cut electrons of orbit during contact with a human body. Therefore, Starlink satellites do not cause the breaking of chemical bonds in the DNA of cells as well as immune system damage. Only much stronger ultraviolet X-rays and gamma-rays, which emit ionised radiation, are capable of doing so. Starlink’s satellites and their radio waves are safe in this regard.