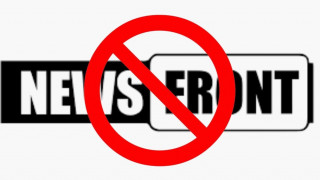 How News Front Continues to Operate

On 1 May 2020, Gulbaat Rtskhiladze wrote in his Facebook post: “…I still want to restore that page if that is possible” and gives the following reply to one of the comments: “This is not a big problem. There are many groups and accounts will be opened. We will use their system against them.” 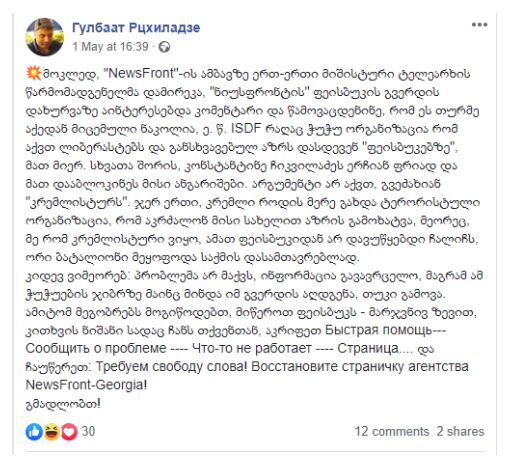 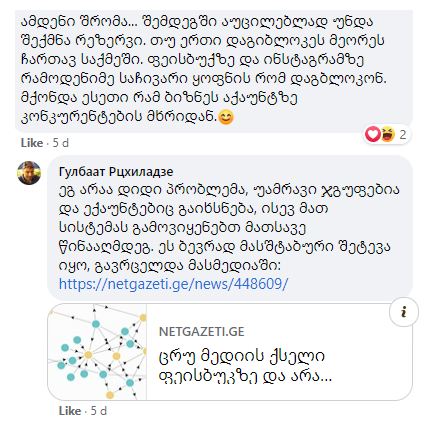 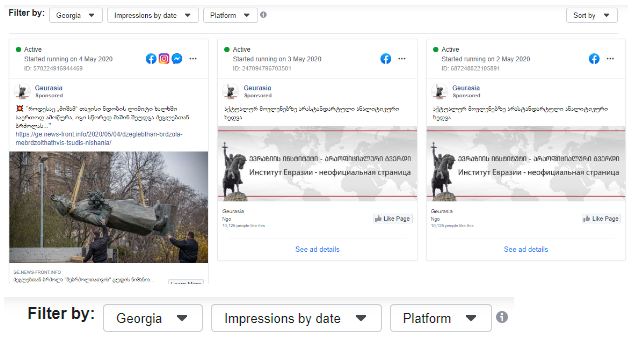 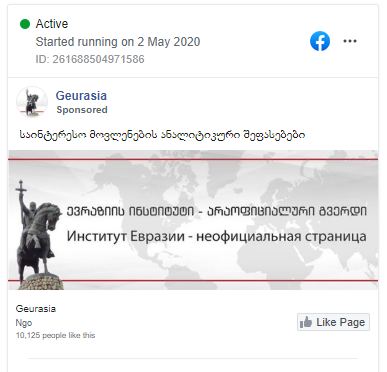 In addition, Gulbaat Rtskhiladze and Geurasia post news in the following groups: Neither Nazi, nor Kotsi! – How to get rid of them, Geomediapress.ge, Rustavi 21 / RUSTAVI 21, Group of the Georgia and the World Newspaper: Russia and Georgia – Friendship Forever and Giorgi Margvelashvili is listening, Friends! 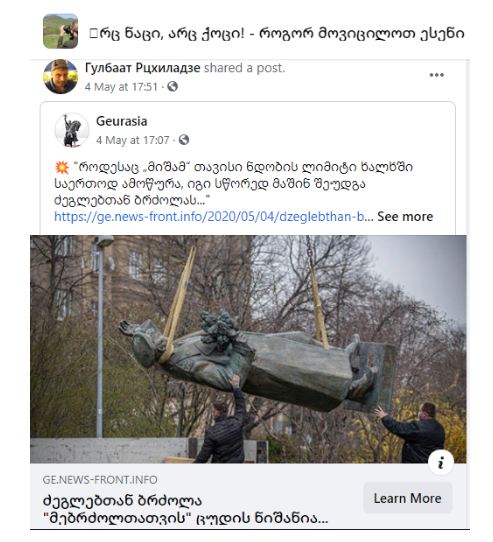 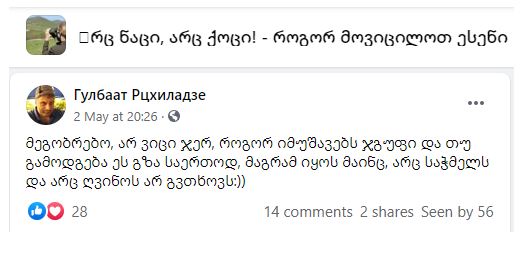 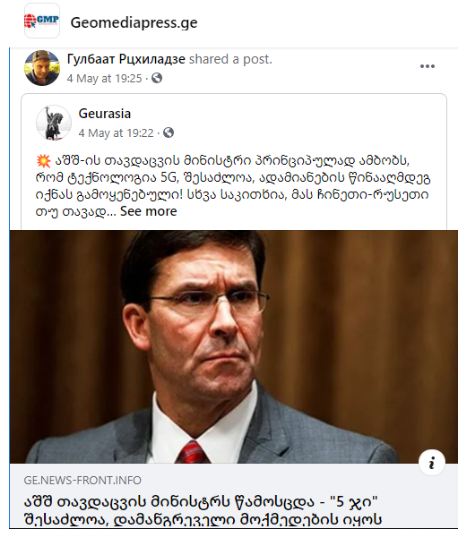 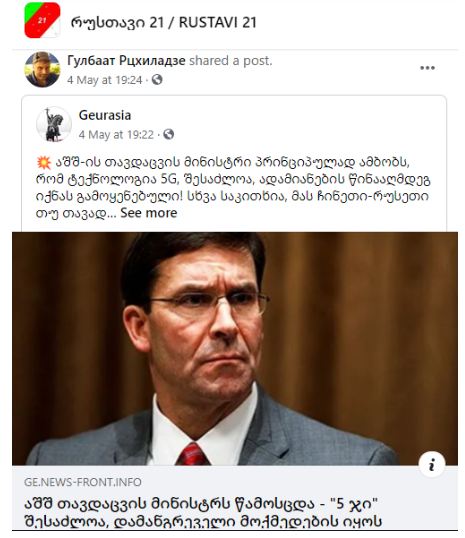 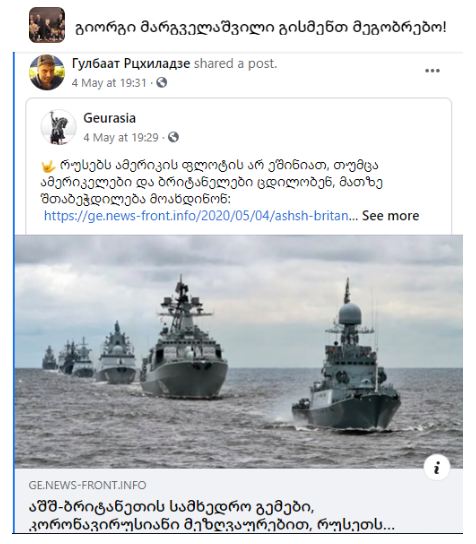 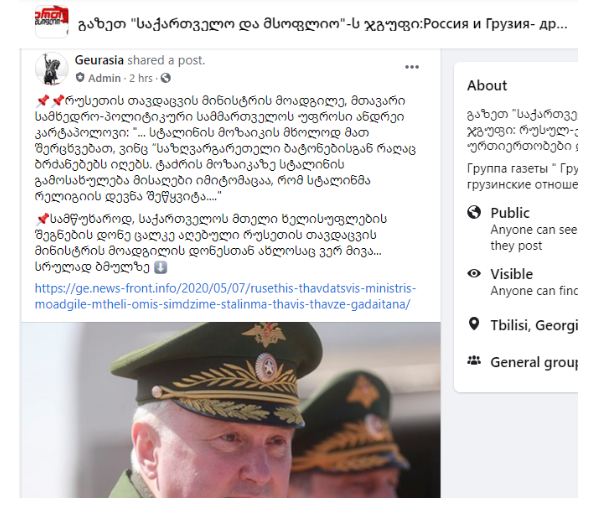 News Front’s Georgian office is part of News Front managed from the annexed Crimea and operatesin eight languages in addition to Georgian. News Front wasfoundedin 2014 and based on different media reports it gets funding from Russia’s Federal Security Service (FSB). According to the ISFED report, News Front was created under the decree of the Russian Federation’s Federal Service for Supervision of Communications, Information Technology and Mass Media. News Front circulates fake news and disinformation all around the world. In News Front’s international news sections, one can find materials of such Russian state-controlled media outlets as Russia Today, Sputnik and RIA Novosti.

Activities of the Eurasian Institute

According to the Eurasian Institute’s report, Gulbaat Rtskhiladze led the web-forum “Politforum” which stated that the August 2008 war was a “Saakashvili-organised criminal provocation.” In 2012, the organisation conducted a public opinion survey and claimed that NATO’s popularity in Georgia had fallen. In 2013, a discussion was held on Russian-Georgian relations which aimed to “support the course of the new government which seeks to settle relations with Russia.” Gia Korkotashvili, later the founder of the Georgian March, also attended the discussion. The same year, the Eurasian Institute hosted a conference, entitled Western Religious Organisations in Georgia and Their Political Objectives, where they discussed the threats coming from the “activities of non-traditional religious denominations.”

In 2013, the Eurasian Institute published a research study on the causes of August 2008 war. The study claimed that then President of Georgia, Mikheil Saakashvili (that is, Georgia), started the conflict and he was pushed by the US to do so. According to the study, Russia was unwilling to de-jure recognise the separatist republic although the Government of Georgia left Moscow with no choice. The Eurasian Institute claims that Russia is not a natural enemy for Georgia but the enmity between the countries should be blamed on “Saakashvili’s regime and the unilaterally pro-Western and anti-Russian foreign policy course.”

In 2014, Gulbaat Rtskhiladze and Shota Apkhaidze held meetings in Moscow with Kremlin-affiliated political scientists. In addition, Mr Rtskhiladze is the Chairperson of the Caucasian Cooperation where Nana Devdariani is also a board member. He is also a member of the founding board of the Public Movement for Georgian-Russian Dialogue and Cooperation and the President of Georgia’s Immortal Army. In 2019, Georgia’s Immortal Army organised a march similar to that of the Russian Immortal Regiment.

Gulbaat Rtskhiladze and Shota Apkhaidze own 50%-50% shares in Agro-Geo LTD. In regard to Shota Apkhaidze, he was arrested in 2010 after storming TV Caucasus together with the members of the Union of Orthodox Parents and the Public Orthodox Movement and was sent to prison. Afterwards he was released as a political prisoner and became a manager of the Eurasian Institute’s projects. In 2013, he stated that “in August 2008, Saakashvili sought genocide of the Ossetian people” at briefings and interviews whilst visiting Vladikavkaz.

News Front’s Georgian office, which was already promoting fake news, actively joined the disinformation campaign on the coronavirus. News Front has been deliberately circulating disinformation against the EU, NATO and USA for years. The narratives of News Front are often identical to those of the Kremlin. This includes News Front’s disinformation about GRU’s cyber attack against Georgia and about the Lugar Laboratory.