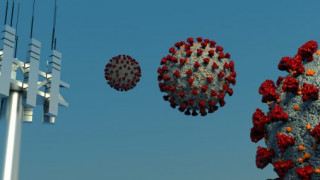 Resume: A video, which shows an ostensibly 5G installer removing part of a 5G transmission tower and seeing COV-19 on a circuit board, has been circulating on Facebook. This recording is not true. As seen in the video, the device is a piece of a kit of an old so-called Set-Top Box (a device which connects to a TV and converts digital signals into analogue ones) with one part later marked COV-19.

The video, where a person which introduces himself as an installer of a 5G tower, removes the “5G transmitter’s circuit board” and discovers a COV-19 marking, has gone viral all over the world, including in Georgia. This video has been actively used as proof of a conspiracy theory alleging links between 5G and the coronavirus (COVID-19). For instance, the Facebook page, Akhalgazrduli, which has over 23,000 subscribers posted the video with the following caption: “COVID-19 is written on a 5G circuit board! A person, who installs 5G towers, took interest in the 5G transmitter’s circuit board, opened it up despite not being allowed to do so, and found that some part of the tower bears the marking COVID-19.” The video was circulated in different Facebook groups and Facebook marked it as false information. 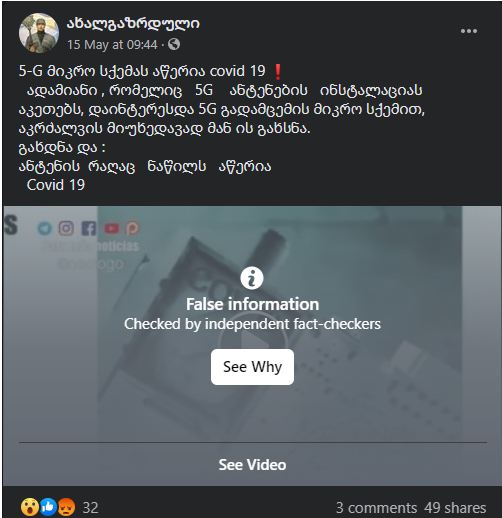 The author of the video does not specify where it was filmed. However, given the fact that cars are parked on the left side of the road, we may assume that the video was filmed in the UK. Of note is that similar to the location, the author also does not disclose the company where he works.

In spite of the paucity of information, the video still provides sufficient data to prove the false nature of its content. The device shown in the video does indeed bear the inscription COV-19. 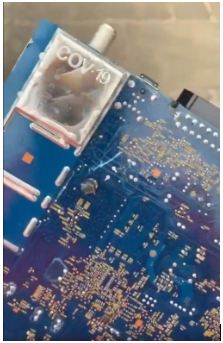 However, the logo of the device’s producer, Hannstar, and the product number Hannstar J MV-1 are also visible in the video. Hannstar is a Taiwanese tech company which produces monitors, laptops and TV displays, set-top boxes and spare parts for these devices. However, it does not produce mobile internet networks, including 5G transmitter devices. 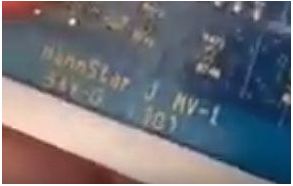 The so-called SCART type connector is also visible on the device. SCART is a physical and electrical interconnector between two pieces of audio-visual equipment such as a TV set and a video cassette recorder. It was invented in France in the 1970s and is completely unrelated to mobile networks. Currently, SCART is an outdated technology and has mostly been replaced by HDMI and DisplayPort connecters. 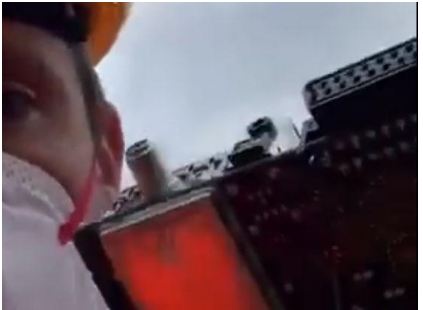 SCART type connector on the device in the video. Source: LEADSTORIES 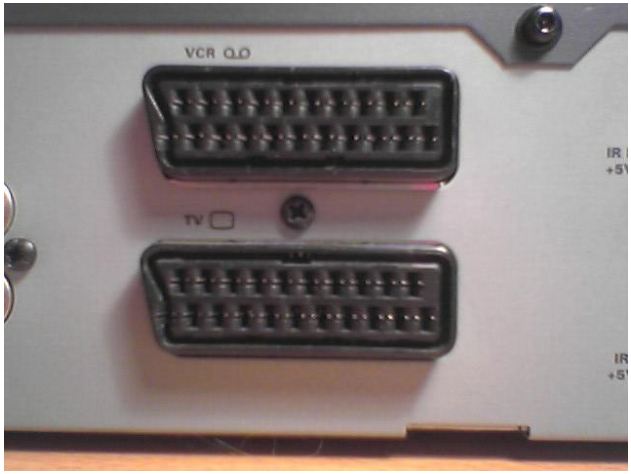 For comparison, a SCART type connector looks like this. Source: LEADSTORIES

Therefore, the device in the video is part of an old so-called set-top box and has no links whatsoever with either 5G or COVID-19. The Associated Press, with the fact checking project, Virgin Media, confirms that the device in the video – HannStar J MV-1 – is part of a nine-year-old television’s set-top box; specifically, it is Cisco 4585 HD (non-PVR). It does indeed use a SCART type interconnector. This model has been for sale since 2011 although it is no longer produced. According to Virgin Media, COV-19 is not inscribed on older parts of that model whilst the inscription shown in the video was later written over the RF tuner’s part (where a coaxial TV cable connects). Reuters’ fact checking platform also concludes that the micro circuit board is part of a television’s old so-called set-top box, there is no COV-19 inscription on its original version and it has no links whatsoever to mobile network infrastructure, including 5G. Reuters also compared the device in the video to the model named by Virgin Media and the placement of their buttons and micro circuit boards coincide. See the full picture below.

Of additional note is that there are no links between 5G and the coronavirus (COVID-19) whilst the 5G internet-network is completely safe for human health. According to the World Health Organisation, 5G mobile networks do not spread the coronavirus. Viruses do not move by radio waves or mobile networks whilst the coronavirus has been spread in such countries where there are no 5G mobile networks such as, for instance, in Japan and Iran. COVID-19 is spread via respiratory droplets when an infected person coughs, sneezes or speaks. In addition, a person can contract the diseases after touching an infected surface.

The International Commission on Non-Ionizing Radiation Protection (ICNIRP) confirmed 5G as safe. Similar to the technologies of the mobile networks of previous generations – 4G, 3G and 2G – 5G is also sent by radio waves. TV and radio broadcast transmitters also use radio waves. Radio waves are a small part of the wide range of electromagnetic spectrum waves and all of them emit electromagnetic radiation. However, radio waves constitute the last part of the spectrum and have a lower frequency as compared to other types of waves. Radio waves emit only non-ionised radiation meaning that they cannot harm RNA within cells.

4G uses approximately a 6 gigahertz range whilst 5G is transmitted within a 30 to 300 gigahertz range. However, in the 30-300 gigahertz range, there is not enough energy to break chemical bonds or remove electrons when in contact with human tissue. Therefore, 5G radio waves do not break chemical bonds in the RNA of cells and do not damage the immune system. Only much stronger ultraviolet X-rays and Gamma-rays, which emit ionised radiation, are capable of doing so. The Australian Radiation Protection and Nuclear Safety Agency is of the same opinion. According to the UK’s Office of Communications (Ofcom), 5G-emitted electromagnetic radiation is 66 times lower as compared to international safety standards. See FactCheck’s article for disinformation circulation about the connection between 5G and the coronavirus.

This article was prepared based on materials of IFCN (International Fact Checking Network) members – Associated Press, Reuters and LEADSTORIES.