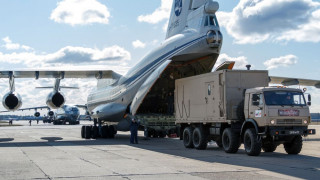 News Front, notorious for being the Russian propaganda mouthpiece, blamed Poland in blocking Russian aircraft to Italy loaded with humanitarian aid and making the aircraft fly over the Black Sea. The false allegation on the part of News Front was based on Russian Senator Alexander Pushkov’s tweet. Sputnik also promoted the same fake news. However, after an explanation from Polish authorities that Russia did not even ask for permission to enter Polish airspace and the information was labelled as fake news, Senator Pushkov removed his statement from Twitter and Sputnik altered the article. Of additional note is that at the same time, the Russian carrier Aeroflot carried out Moscow-Rome flights through Polish airspace.

News Front published an article entitled “Poland’s Deranged Government Blocked Russian Aircraft to Italy.” According to the article, on 23 March 2020 “Russia, currently under sanctions of the EU, sent nine military jets full of medical supplies and 100 medical doctors to help EU member Italy [in the fight against the coronavirus].” As claimed by News Front, Poland’s “senseless” government denied permission for the Russian airlift jets to fly through Polish airspace and as a result Russia had to fly through the Black Sea, Turkish and Greek airspace to reach Italy.

According to News Front, the EU did not make any comment about the issue whilst Russia’s Ministry of Defence was preoccupied in “providing tangible support to Italy” and did not have time to respond to the “treachery” of the Polish government. News Front bases its, information on the tweet of Alexander Pushkov, a member of Russia’s Federation Council, where he wrote that “aid was intended for Poland’s ally in the EU and NATO. From now on, Russia should not concede anything, absolutely nothing, to Poland.”

There is no real evidence to corroborate this information. Initially, the information was reported by the Russian propaganda media, Sputnik, based on Russian Senator Alexander Pushkov’s tweet. The fake news started to circulate in the Bosnian and Montenegrin media, too. The Deputy Foreign Minister of Poland, Marcin Przydacz, commented on the issue on Twitter:

Poland’s Ministry of Foreign Affairs also commented upon the issue and declared the information as fake news. Poland’s Ministry of Defence issued the following explanation vis-à-vis the Russian Senator’s information: “The Russian side has not been submitting any request to enter Polish airspace. The flight route was planned via Russia, Turkey, Greece, Albania, and Italy.” The Polish Air Navigation Services Agency (PANSA), which supervises traffic in Polish airspace, also responded to the allegation and stated that the information that Polish airspace was closed for Russian aircraft was untrue and added that Polish airspace was open with unrestricted air traffic. 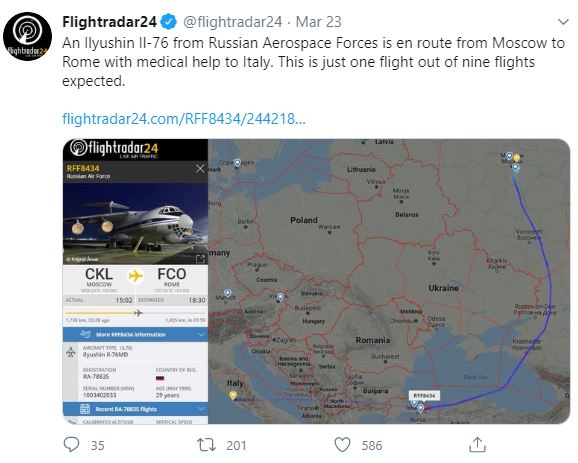 The falsity of the Russian senator’s allegation is further attested to by the fact that the Russian carrier Aeroflot carried out Moscow-Rome flights through Poland’s airspace on the same as well as the previous and next days. 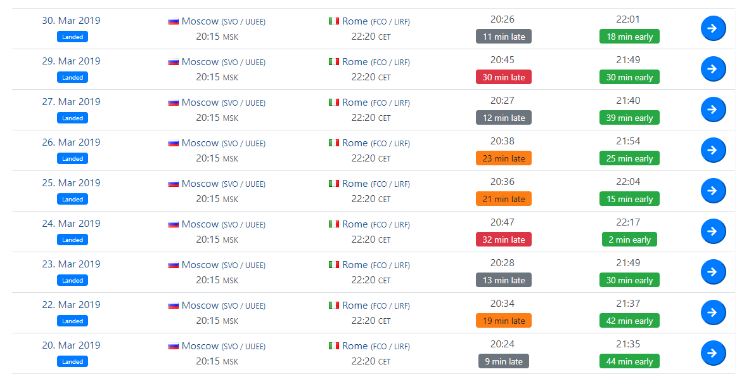 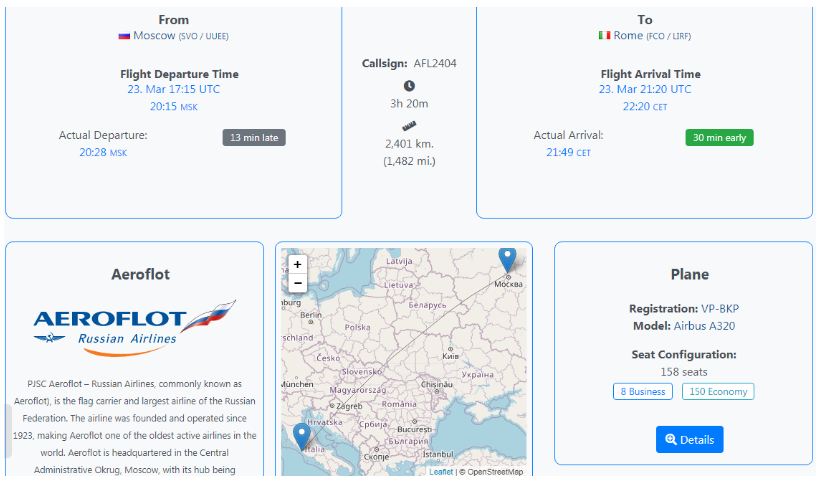 After the statements of the Polish authorities, Senator Pushkov deleted his statement on Twitter and Sputnik updated the article and amended the title, among others. However, in the web address of Sputnik’s news, we can still see the initial title based on which the news was reported in different countries, including in Georgia. 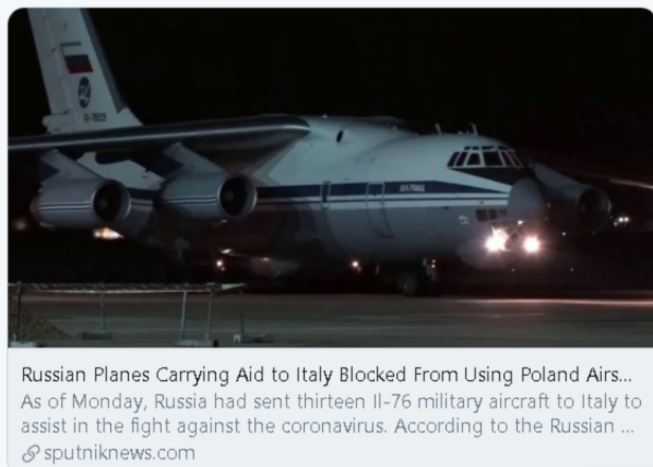 Screenshot of the initial version of Sputnik’s article. Source: Polygraph 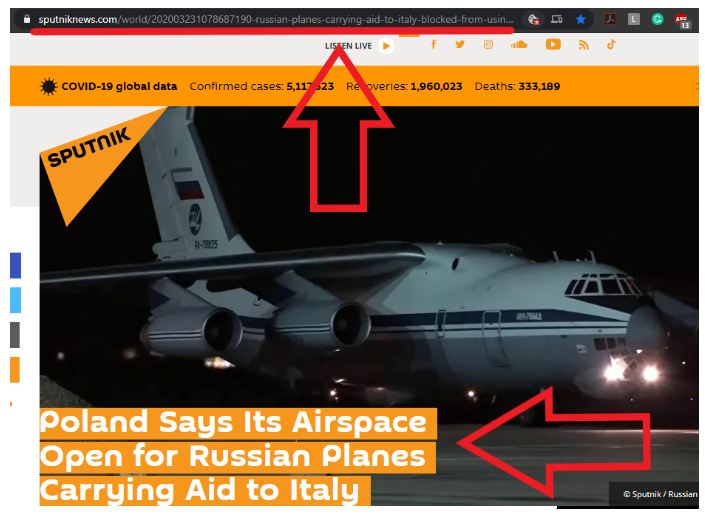 The current version of Sputnik’s article. The title of the article is “Poland Says Its Airspace Open for Russian Planes Carrying Aid to Italy” whilst the web address of the article is https://sputniknews.com/world/202003231078687190-russian-planes-carrying-aid-to-italy-blocked-from-using-poland-airspace---russian-lawmaker/ (Russian planes carrying aid to Italy blocked from using Poland airspace – Russian lawmaker). 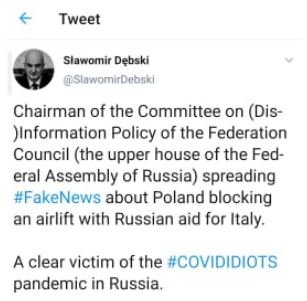 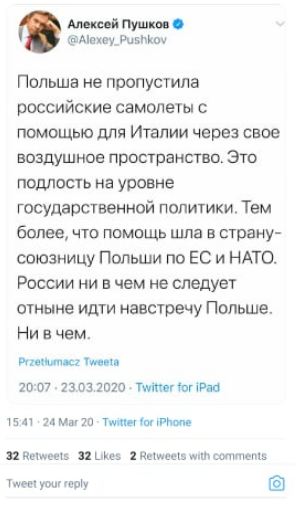 Nevertheless, News Front has neither amended nor deleted its article and as a result it promoted disinformation and fake news discrediting Poland. According to News Front’s website, the aforementioned article was shared 2.2 thousand times on Facebook. According to the Crowdtangle programme, which calculates the data of Facebook posts posted publicly and in open groups, News Front’s article has 1,233 reacts, 750 comments and 233 shares. For instance, the article was shared in the following groups: International Stalinist Movement, Kakha Kaladze Mayor of Tbilisi and on the Facebook page of Georgia and the World.

In addition, there are some questions in regard to the reality or the motives of Russia’s aid to Italy. See FactCheck’s article on that issue.

News Front’s Georgian office is part of News Front managed from the annexed Crimea and operates in eight languages in addition to Georgian. News Front was founded in 2014 and based on different media reports it gets funding from Russia’s Federal Security Service (FSB). According to the ISFED report, News Front was created under the decree of the Russian Federation’s Federal Service for Supervision of Communications, Information Technology and Mass Media. News Front circulates fake news and disinformation all around the world. In News Front’s international news sections, one can find materials of such Russian state-controlled media outlets as Russia Today, Sputnik and RIA Novosti.

Shota Apkhaidze and Gulbaat Rtskhiladze are the editors of News Front’s Georgian office. Gulbaat Rtskhiladze is one of the co-founders and chairperson of the Eurasian Institute. According to his interviews, he opposes Georgia’s course of NATO integration and believes that Georgia should have ideal relations with Russia. Mr Rtskhiladze also opines that Georgia’s membership in NATO will result in permanently losing the country’s territories. In regard to Shota Apkhaidze, he was arrested in 2010 after storming TV Caucasus together with the members of the Union of Orthodox Parents and the Public Orthodox Movement and was sent to prison. Afterwards he was released as a political prisoner and became a manager of the Eurasian Institute’s projects. In 2013, he stated that “in August 2008, Saakashvili sought genocide of the Ossetian people” at briefings and interviews whilst visiting Vladikavkaz.