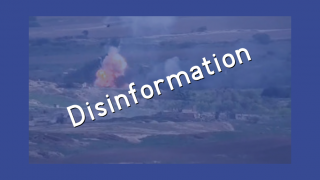 Disinformation: Syrian fighters and weapons are transported to Azerbaijan through Georgia

Verdict: Information that Syrian fighters are transported to Azerbaijan through Georgia is FAKE NEWS.

Disinformation: Syrian fighters and weapons are transported to Azerbaijan through Georgia.

Verdict: Information that Syrian fighters are transported to Azerbaijan through Georgia is FAKE NEWS.

On 27 September 2020, fighting broke out between Azerbaijan and Armenia in Nagorno-Karabakh.

International media, covering the conflict, reported (for instance The Guardian, CNN, Reuters, BBC) that a Turkish private military company hired Syrian mercenaries and sent them to Azerbaijan. Both Turkey and Azerbaijan deny these reports.

According to information as reported by Samkhretis Karibche, “on 29 September, locals blocked the Georgia-Turkey central highway near Kartsakh. They do not allow the passage of vehicles moving from Turkey to Georgia. Demonstrators say that through this form of protest they seek to understand why they are impeded from helping Armenian troops fighting in Nagorno-Karabakh as well as those injured.” One of the locals, in his interview with Samkhretis Karibche, stated: “We read on Facebook that Georgia easily opened passage for Azerbaijan whilst we hardly managed to send food. We need to know why Georgia does not allow us to help Armenian troops.” In addition, according to Netgazeti, the Armenian-language Aliq-Media reports that one of the protesters stated: “Weapons are sent from Turkey to Azerbaijan through Georgia and that is why we decided to block the road.” The same was reported by Akhalkalaki ATV 12. These facts are examples of the malignant influence of disinformation.

The Head of the State Security Service of Georgia, Grigol Liluashvili, commented upon the disinformation being promoted in social media and stated that reports of the alleged transportation of Syria-based illegal armed factions from Turkey to Azerbaijan through Georgian territory is groundless. Mr Liluashvili also added that “this is a falsehood and aims to escalate and aggravate the situation in Georgia and throughout the region in general.” He also said that “the same sources report information in order to hamper peaceful coexistences in our certain municipalities and specific calls are made to block the highways leading to Azerbaijan.”

On 3 October 2020, the National Security Council of Georgia released a statement in regard to the military conflagration between Armenia and Azerbaijan and the situation around the conflict. The statement reads: “Given the military hostilities between Azerbaijan and Armenia, the Government of Georgia suspended issuing permits on the transiting of military cargo through Georgian land and airspace in the direction of both countries” and the parties were informed about the decision. At the same time, civilian cargo transits are carried out safely and unimpeded to any direction, including Azerbaijan and Armenia.” In addition, “since the moment of escalation, Georgia has not imposed any restrictions on the air transportation of civilian cargo and such restrictions will not be imposed.” Georgian authorities also confirm this information. As stated by Davit Zalkaliani, the Minister of Foreign Affairs, “because of the military hostilities between Azerbaijan and Armenia, the Government of Georgia has made significant effective steps since the beginning of the escalation. One of the important steps in this regard was temporarily suspending the issuance of permits on the transportation of military cargo through land and air routes in the direction of both countries and our partners have been informed and we are constantly in touch with them. As for any other international cargo transit, Georgia fully complies with its international obligations.” The National Security Council Secretary and the Minister of Internal Affairs, Vakhtang Gomelauri, stated that since the beginning of the conflict, Georgia suspended military transportation and “both Armenia and Azerbaijan have been notified about this” whilst “since the eruption of the hostilities, Georgia allows both land and air passage to civilian cargo in the direction of both countries and no restrictions have been imposed in this regard.” The Minister of Economy and Sustainable Development, Natia Turnava, stated: “Civilian cargo transit through Georgia is carried out absolutely unimpeded both in regard to Armenia and Azerbaijan” which is confirmed by the statistics since “nearly 750-800 cargo trucks cross the Georgia-Azerbaijan and Georgia-Armenia state borders daily.” Moreover, according to Ms Turnava, “for the safer and orderly functioning of Armenia’s civilian cargo transit, we launched the busy Ninotsminda-Bavra customs check-point which serves cargo transportation from Georgia to Armenia and vice versa. Cargo transit from Armenia is very intense, border crossings are high in number and there is not any impediment nor will there be in the future in this regard.”

Of note is that the Embassy of Armenia in Georgia also released a statement vis-à-vis the disinformation on delivering weapons from Georgia to Azerbaijan. The Embassy stated that “the video circulating through the internet, alleging that military equipment recorded in Borjomi will be handed over to Azerbaijan does not correspond to the truth. The military equipment shown in the video belongs to the Georgian Defence Forces and their transportation was carried out based on Georgia’s security interests.” The embassy also urged citizens to avoid circulating disinformation since it “may cause panic and undesirable consequences.”