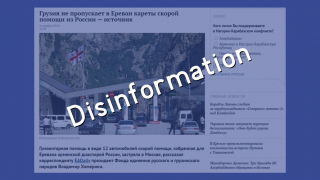 Verdict: FactCheck concludes that this information is FAKE NEWS

Verdict: FactCheck concludes that this information is FAKE NEWS

According to the Eurasia Daily (EA Daily report, based on Vladimer Khomeriki’s information, Georgia has ostensibly been refusing the passage of humanitarian cargo donated by the Armenian diaspora in Russia coming from Russia to Armenia. Mr Khomeriki states that the Armenian diaspora addressed the Ministry of Foreign Affairs of Georgia in regard to the transit of special vehicles and medical humanitarian cargo destined for the Armenian people in need. However, Mr Khomeriki claims that transit has been denied and all vehicles are stuck in Moscow. He also adds that a complaint is being drafted to be submitted to United Nations Human Rights Committee on refusing to allow humanitarian cargo transit.

The Embassy of Armenia to Georgia commented upon this information. According to the statement released by the Embassy, “information that Georgia refuses the transit of fuel and humanitarian assistance to Armenia does not correspond to the truth.” According to the embassy, “there are no problems in regard to the transportation of fuel or humanitarian assistance. In addition, the Embassy of Armenia to Georgia called on everyone to “refrain from circulating disinformation since it directly harms Armenia’s national interests.”

The Government of Georgia also made remarks vis-à-vis the aforementioned issue. Since fighting broke out in Nagorno-Karabakh, Georgia has only banned military cargo transit to Azerbaijan and Armenia whilst civilian cargo is transported unimpeded in the direction of both countries. As stated by the Minister of Economy and Sustainable Development of Georgia, Natia Turnava, “civilian cargo transit through Georgia is carried out absolutely unimpeded both in regard to Armenia and Azerbaijan” which is confirmed by the statistics since “nearly 750-800 cargo trucks cross the Georgia-Azerbaijan and Georgia-Armenia state borders daily.” In addition, Ms Turnava further added that for the safer and orderly functioning of Armenia’s civilian cargo transit, the Ninotsminda-Bavra customs check-point was opened which serves intense cargo transportation from Georgia to Armenia and vice versa.

On 3 October 2020, the National Security Council of Georgia (NSC) released a statement in regard to the military conflagration between Armenia and Azerbaijan and the situation around the conflict. The statement reads: “Given the military hostilities between Azerbaijan and Armenia, the Government of Georgia temporarily suspended issuing permits on the transiting of military cargo through Georgian land and airspace in the direction of both countries” and Georgia has informed both countries about this decision. The NSC also stated that “civilian cargo transit is carried out safely and unimpeded in any direction, including Azerbaijan and Armenia.” Since the moment of escalation, Georgia has not imposed any restrictions on the air transportation of civilian cargo and such restrictions will not be imposed.

Georgian authorities also confirm this information. As stated by Davit Zalkaliani, the Minister of Foreign Affairs, “because of the military hostilities between Azerbaijan and Armenia, the Government of Georgia has made significant effective steps since the beginning of the escalation.” Mr Zalkaliani added that “one of the important steps in this regard was temporarily suspending the issuance of permits on the transportation of military cargo through land and air routes in the direction of both countries and our partners have been informed and we are constantly in touch with them. As for any other international cargo transit, Georgia fully complies with its international obligations.”

The National Security Council Secretary and the Minister of Internal Affairs, Vakhtang Gomelauri, stated that since the beginning of the conflict, Georgia suspended military transportation and “both Armenia and Azerbaijan have been notified about this” whilst “since the eruption of the hostilities, Georgia allows both land and air passage to civilian cargo in the direction of both countries and no restrictions have been imposed in this regard.”

In regard to the person who promotes disinformation, Vladimir Khomeriki, he is the President of the Unity of Russian and Georgian Peoples. Mr Khomeriki is notorious for his pro-Russian and anti-Georgian statements and believes that Georgia’s territory is not occupied by Russia. Mr Khomeriki opines that the “occupation is something entirely different” and the “presence of Russian peacekeepers in Abkhazia and South Ossetia’s territories was stipulated by the steps our government made.” Furthermore, he states that “Russia is also occupied by Georgians” since “more than one million Georgians currently live in Russia.”

Since fighting broke out in Nagorno-Karabakh, disinformation against Georgia has been actively promoted through social networks and FactCheck has already written about this issue (see Article 1 and Article 2).