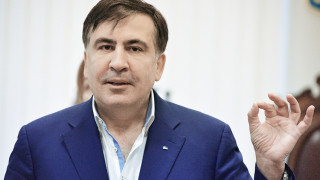 Mikheil Saakashvili: “Biden’s visit during the war and meeting with me was very helpful for Obama’s rating.”

On 10 November 2020, on air on Mtavari Arkhi, the third President of Georgia, Mikheil Saakashvili, made comments on the US presidential elections. Mr Saakashvili stated that Joe Biden is his close friend and added: “This is a man who visited Georgia first when the war broke out and delivered USD 1 billion in aid and who was nominated as candidate for US Vice-President after that because his visit and meeting with me was very helpful for Obama’s rating.”

Joe Biden visited Georgia after the 2008 war at the request of Mikheil Saakashvili and returned to the USA on 18 August 2008. Mr Biden was picked as the candidate for Vice-President on 23 August 2008 after that visit. However, Biden’s candidacy for that position had already been pondered prior to his visit to Georgia.

Cindy McCain, wife of John McCain and potential first lady of the USA, visited Georgia and met with Mikheil Saakashvili. John McCain himself expressed his support towards Georgia. Senator McCain has always been an outspoken critic of Russia and his criticism of Russia during the 2008 war and after was not an exception. Of note is that of the two presidential hopefuls, John McCain was the first who made remarks on war in Georgia.

However, controversies persisted that John McCain used the Russia-Georgia war to emphasise his foreign policy credentials. The Vietnam War veteran mentioned several times that he was a better fit to become a commander-in-chief as compared to his rival. Obama’s decision to pick Biden as his running mate was also followed by controversies. According to a popular theory, Obama selected Biden to strike a balance; in particular, for his experience in foreign policy.

Of note is that both Obama and McCain expressed their support towards Georgia during the campaign period. The Russian invasion of Georgia was also a matter for the first presidential debates. Therefore, it is impossible to determine whether or not this issue had a positive or any influence whatsoever on the candidates’ ratings. In addition, the candidates were mostly in agreement whilst speaking about Georgia and unanimously condemned the Russian aggression.

However, it is easy to delineate those important issues and aspects which played a crucial role on the ratings and, consequently, on the election outcome.

The 2008 US presidential election campaign was punctuated by significant domestic and foreign policy crises. Of those, the most pressing issues were the 2007-2008 economic crisis as well as the US involvement in the Iraq War. Therefore, the economy and the war in Iraq loomed larger for the 2008 election campaign and were key subjects in the debates between the Democratic Party candidate Barack Obama and the Republican Party candidate John McCain.

During the 2008 election campaign, both candidates were able to build their campaign on these important issues.

Table 1: List of Voter Concerns for US Presidential Elections in 2004 and 2008 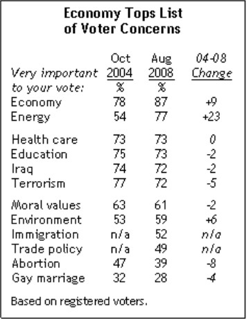 The 2007-2008 world economic crisis significantly affected the fate of the presidential elections. George W. Bush’s failure to tackle the economic crisis and his rising unpopularity impacted McCain as a candidate since he was nominated from the same party where the then incumbent president belonged. This was also reflected on the ratings. From April 2008, McCain took the lead in polls only once, in September 2008. His boost was preceded by the Republican Party convention where he was officially nominated as the candidate for president.

On 17 September 2008, several days before the presidential debates, Barack Obama gave a speech in Nevada which brought him back into a leading position in the ratings. Obama’s main motto during the entire campaign was “changes.” In his speech, Obama touched upon the issues which were top concerns for the American voters: affordable healthcare, energy and economic transformation and education reform.

This speech stipulated and guaranteed Obama’s increasing lead in the polls. 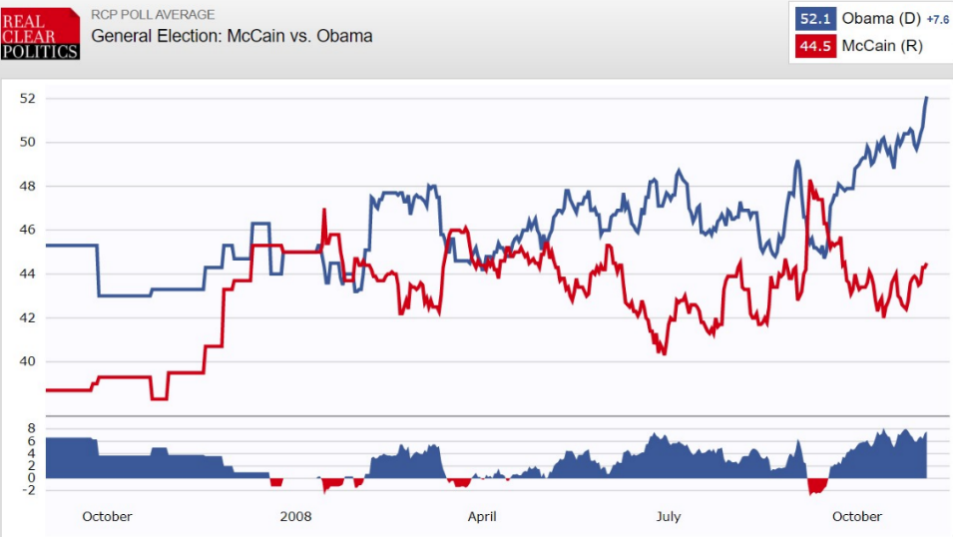 Obama’s approval was positively affected by the unpopularity of the war in Iraq and President George W. Bush.

John McCain supported the war in Iraq whilst Barack Obama was against it. Obama used McCain’s position against the Republican Party candidate to link his ideas with the unpopular President George W. Bush. In the first presidential debates, whilst speaking about disagreements with John McCain, Barack Obama mentioned the name of the then incumbent President George W. Bush more than ten times precisely in order to associate McCain with Bush.

George W. Bush endorsed John McCain. Although the latter admitted several times that he had disagreed with Bush’s policy (including the then President’s stance on climate change), he was in favour of the war in Iraq. Obama actively exploited this during the campaign and claimed that McCain had sided with Bush on over 90% of the issues, attested to by his congressional voting record, which was in line with Bush’s ideas.

According to Pew Research’s report, McCain was thought of together with Bush. A total of 71% of the voters disapproved of the job George W. Bush was doing whilst 48% of voters said they thought that McCain would mainly continue Bush’s policies if he were elected.

Given the aforementioned circumstances, Mikheil Saakashvili’s statement that Joe Biden’s visit to Georgia and his nomination as Obama’s running mate had a positive influence on Obama’s rating is false. The 2008 presidential polls as well as the fate of the elections were decided by issues important for the American people: the economy, healthcare and education. Bush’s unpopularity also played an important role in shaping the polls and the outcome of the elections. We can assume that the situation in Georgia and America’s reaching out contradicted the ideas of isolationism and internal political stability which were the main political requests of the American voters at the time and which directly shaped the election outcome.

As mentioned previously, Joe Biden was nominated as the candidate for Vice-President after his visit to Georgia. However, his visit to Georgia and meeting with the then President Saakashvili had no substantial influence over the ratings of the 2008 presidential hopefuls. In addition, Obama was already leading in the polls. Furthermore, Cindy McCain, wife of the Republican Party’s presidential candidate, also visited Georgia which invalidates the aforementioned claim. If we assume that the visit of the not-yet-nominated candidate for Vice-President had a positive influence on Obama’s ratings, we should also assume that the potential first lady’s visit also positively influenced John McCain’s rating which does not provide for a real difference in the ratings. In addition, of note is that both parties were united in their positions towards Georgia and their condemnation of the Russian military aggression.