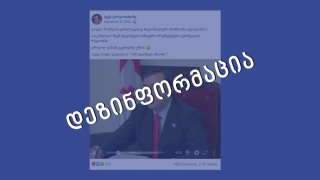 Disinformation: Mikheil Saakashvili Admitted He Had Started the War

Disinformation: Mikheil Saakashvili Admitted He Had Started the War

A popular user of social network, Beka Vardosanidze, posted a publication where Mikheil Saakashvili ostensibly admits in the video that he “started the war.”

Here is the video which the UNM tries to block

Saakashvili: We started military operations in the Tskhinvali region

Grigol Vashadze is sitting next to him 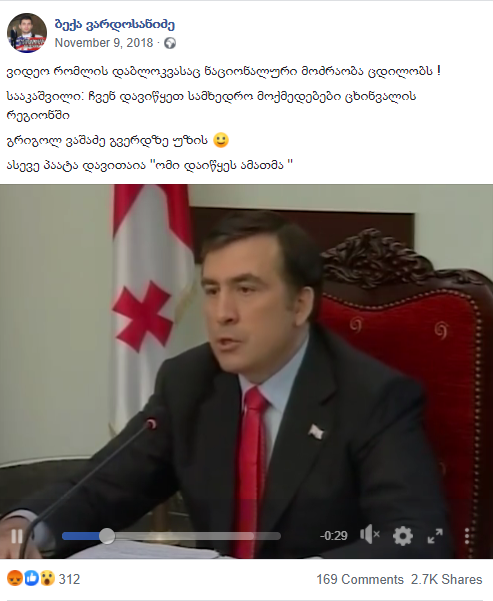 Of note is that Beka Vardosanidze’s video is a fragment of a video recording of a session of the Parliament of Georgia’s investigation commission on the 2008 Russia-Georgia war. The selected fragment and added caption – “Saakashvili: We Started Military Operations in the Tskhinvali Region” aims to mislead the social network users.

Mikheil Saakashvili’s exact quote in the video is as follows: “As to the question of whether or not we carried out military operations at the beginning of August to establish control over Tskhinvali and other areas in South Ossetia which were previously under our control, I have declared openly before and will say now: Yes, we made a decision to carry out military operation in the Tskhinvali region. We did make that decision.”

In fact, Mikheil Saakashvili is referring to those events which prompted Georgia to respond to the Russian aggression. At the end of the same quote, the former president of Georgia says that the aforementioned decision was tough, but inevitable. The following quote in Beka Vardosanidze’s publication, “Saakashvili: We Started Military Operations in the Tskhinvali Region,” is fake since Mikheil Saakashvili did not actually say that. The third president of Georgia spoke about carrying out a military operation and a decision to engage in the hostilities. Mr Vardosanidze, by twisting this quote, misleads the reader who might not pay attention to exactly what Mikheil Saakashvili was saying word by word.

Beka Vardosanidze made this publication in a social network as early as in 2018 when Grigol Vashadze was running for president of Georgia. The aim of Mr Vardosanidze’s publication was to discredit Mr Vashadze as well, seeking to use this manipulation during an election campaign period. After the announcement of the ruling of the European Court of Human Rights, the aforementioned video clip has once again gone viral through social networks and other pages also engaged in promoting the same video with a similar caption (for instance, see here). FactCheck concludes that Beka Vardosanidze’s claims are FAKE.

This article was produced as part of Facebook’s Fact-checking Programme. Given the rating, Facebook may impose different restrictions – click here for full information. For information on issuing a correction or dispute a rating, please see here.