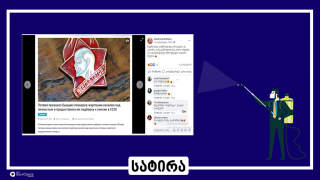 Verdict: WITHOUT A VERDICT

Verdict: WITHOUT A VERDICT

It is actively reported through social networks that the Government of Latvia recognised the former Pioneers as victims of violence and introduced a EUR 220 pension supplement for them. This information is derived from an article published on the Russian satirical website, “Panorama.” According to this article, the Saeima of Latvia adopted a new law in January 2020 and recognised former Pioneers as victims of the Soviet repressive system. Therefore, the Government of Latvia took a commitment to provide a pension supplement for them. Georgian Facebook users also reposted the aforementioned satirical publication.

In fact, the Saeima of Latvia has not adopted a law on providing pension supplements for the former Pioneers.

Since the 1990s, the Baltic countries have been taking different measures to tackle the negative consequences of the Soviet occupation. As early as in 1990, the independence declaration drafted by the Supreme Council of the Republic of Latvia condemned the USSR’s military aggression against Latvia as an international crime.

This article was produced as part of Facebook’s Fact-checking Programme. Given the rating, Facebook may impose different restrictions – click here for full information. For information on issuing a correction or dispute a rating, please see here.