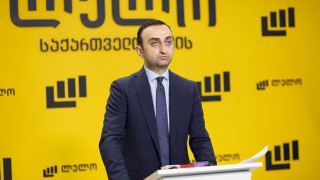 “Investments are at 15-year low and such a drop in investments did not even happen in the war period.”

Gigla Mikautadze: “Investments are at 15-year low and such a drop in investments did not even happen in the war period.”

The analysis of the changes in the FDI to GDP ratio would be relevant for a comprehensive analysis of the FDI trend. However, the reporting period (2005-2020) includes the years where GDP calculations were made under a different methodology and, therefore, the figures are not comparable.

According to the preliminary data, the volume of foreign direct investments to Georgia in 2020 is USD 616.9 million which is 52.9% lower as compared to the final figures of 2019.

Of note is that the volume of foreign direct investments in Q4 of 2020 amounted to USD -102.8 million meaning that there was an investment outflow from Georgia. The transfer of several companies from non-residents to residents was named as a key driver behind this drop. This reason has been routinely used by the government to “justify themselves” whilst speaking about the declining foreign investments. However, the authorities’ providing only “technical” aspects (paying debts, completion of the BP pipeline project, etc.) as a counter-argument to explain the declining FDI dynamic may be speculative. Usually, when FDI was on the rise in the past years, attention was not paid to such details. A part of the investments has previously been outflowing from the country (debts were paid and companies were sold), although these outflows were offset by other inflows which could not be done in the past years. Therefore, the pointing out of technical reasons does not absolve the authorities of their responsibility. 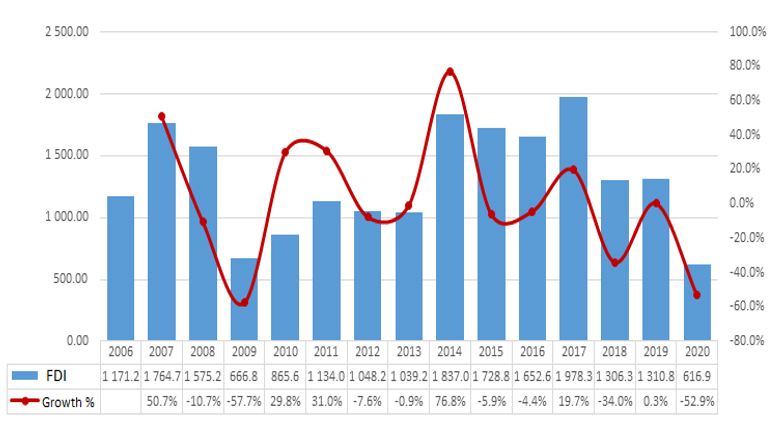 The re-investment share in 2020 amounts to 90.9% (USD 560.7 million) of the total foreign direct investments. Debt obligations are USD 47.1 million whilst the FDI made in equity capital is USD 9 million. Such a high re-investment figure illustrates that basically no new investments were made in the country.

It is certain that such a sharp drop in the foreign direct investments in 2020 is directly linked with the pandemic. However, the investment volume had also already been declining in the pre-pandemic period.

[1] To assess the foreign direct investment dynamic, it would be relevant to analyse the FDI to GDP ratio. However, these figures cannot be compared to those dating before 2010 given that the GDP has been calculated with a new methodology since 2010.