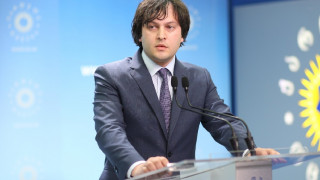 “If someone is not a politician, he cannot be a political prisoner. This is a simple axiom.”

Irakli Kobakhidze: “If someone is not a politician, he cannot be a political prisoner. This is a simple axiom.”

On 30 March 2020, the second round of EU-mediated negotiations between the ruling party and the opposition failed. After the meeting, the chairperson of the Georgian Dream, Irakli Kobakhidze, spoke about the opposition being responsible for the failure to reach an agreement and stated: “The opposition was irritated at the very beginning because the moderator, Mr Christian Danielson, did not at all include a point about the elections and kept a strong position about this until the very end. Therefore, the opposition pushed forward one ultimatum and then a second ultimatum was related to Rurua’s case. These two ultimatums were the reason why the continuation of the dialogue made no sense.” On 1 April 2020, in response to a journalist’s question about the imprisonment of Giorgi Rurua and his release, Mr Kobakhidze stated: “If someone is not a politician, he cannot be political prisoner. This is a simple axiom. We do not speak of complicated matters here.” In the coming days, other members of the Georgian Dream, Mamuka Mdinaradze, Beka Davituliani and Aluda Ghudushauri, made similar statements.

FactCheck took interest in the accuracy of Mr Kobakhidze’s statement. This article does not aim to provide an assessment of an ongoing criminal case against any specific individuals. This article, however, does aim to ascertain in which cases a person can be called a political prisoner and whether or not a person being a politician is necessary for this status. Therefore, in this article, FactCheck does not review the issue of Giorgi Rurua’s imprisonment but the essence and idea of the notion in general.

Who can be a political prisoner?

According to the Georgian legislation, there is no single legal and official definition of a political prisoner. Therefore, the term “political prisoner” is of a non-official status which in a wider understanding implies a person’s criminal prosecution for his political creed or/and his activities.

Nevertheless, after the Georgian Dream’s coming to power in 2012, the Parliament of the eighth convocation adopted a Law on Amnesty. The preamble of the law reads: “Given the current political-legal situation, the Parliament of Georgia, guided by the criteria as defined by the PACE Resolution N1900 (2012) and believing that there are people subject to politically motivated arrest and persecution, announces political amnesty in line with this law.”

In accordance with the PACE Resolution N1900 (2012), a person deprived of his or her personal liberty is to be regarded as a political prisoner:

a. if the detention has been imposed in violation of one of the fundamental guarantees set out in the European Convention on Human Rights and its Protocols (ECHR); in particular, freedom of thought, conscience and religion; freedom of expression and information, freedom of assembly and association;

b. if the detention has been imposed for purely political reasons without connection to any offence;

c. if, for political motives, the length of the detention or its conditions are clearly out of proportion to the offence for which the person has been found guilty or of which he or she is suspected;

d. if, for political motives, he or she is detained in a discriminatory manner as compared to other persons; or

e. if the detention is the result of proceedings which were clearly unfair and this appears to be connected with the political motives of the authorities.

Apart from the aforementioned resolution, a Manual on Political Prisoners in Georgia was published as part of the Uniting Georgian Civil Society to Jointly Study the Issue of Political Prisoners project, funded by the Open Society Georgia Foundation. According to the document, a political prisoner can be an individual who:

a. was detained, imprisoned or had his/her freedom restricted through the violation of fundamental rights guaranteed by the Constitution of Georgia and/or the European Convention on Human Rights such as freedom of belief, freedom of expression and information, the right to assembly and manifestation;

b. was detained, imprisoned or had his/her freedom restricted only on political grounds and not for committing any particular crime;

c. was detained, imprisoned or had his/her freedom restricted because of the political activities of his family member, relative or close person;

d. was found to be an offender, accused due to political motives and whose length of detention, imprisonment and/or restriction of freedom was disproportionate to the crime committed;

e. was detained due to political motives consisting of more discriminative conditions than other detained, imprisoned or freedom-restricted persons;

f. was detained, imprisoned or had his/her freedom restricted as a result of an obviously unfair trial that is allegedly linked with the political motives of the government;

g. was detained, imprisoned or had his/her freedom restricted for the violation of a law or an offence that was provoked by a political motivation the government or/and other interested people.

In accordance with the Manual, these criteria are based on those established by the Council of Europe and Amnesty International as well as practices and trends in Georgia.