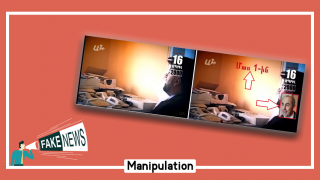 Several Facebook pages, as well as clickbait sites, have been spreading the news that one million people had already left the Republic of Armenia (RA) by the third year of the presidency of the second president Robert Kocharyan, the leader of the “Armenia” alliance in the upcoming snap elections. They were afraid, according to these sources, to starve if they stayed in the country. This information is manipulative because it only shows the number of people leaving the country, without considering how many had returned in the same period. An entirely different picture is painted when that part of the data is left out.

Who has been Spreading the News and Where Does It Come From?

The information that more than a million people left the country during the first three years of Kocharyan’s presidency, started spreading on May 25, 2021. However, the video clip which was the primary source of this news, was first published in April of 2015, by a journalist of A1+, Mher Arshakyan. A1+ is a television platform that lost its broadcasting rights during Kocharyan’s presidency. On April 16, 2021, A1+ decided to retrieve and publish this video clip from its archives, while some clickbait sites and Facebook pages, which usually become active right before the elections, began spreading it. YouTube channels like Freedom Armenia, which supports the current government, also participated in disseminating the video.

Why is this statement manipulative?

The journalist says that by April 16, 2000, 1.2 million people had left the country. He doesn’t indicate, however, that this number concerns the third year of Kocharyan’s presidency. Neither does he mention in his reportage that so many people left the country not to die of hunger. Thus, the websites and the Facebook pages which were sharing the video were also misrepresenting the information that it provided. Incidentally, two different broadcasts of the A1+ TV program “Calendar” (Օրացույց [Orats’uyts’]) – one from May 29 and the other from April 16 – were edited together in the shared video clip. In this new edited version, the photograph of Kocharyan is also used, which did not appear in any of the original programs.

Media.am and Factcheck.ge tried to examine the migration balance during the years 1998, 1999, and 2000: the first three years of Kocharyan’s presidency.

According to the data provided to us by the Statistical Committee of the Republic of Armenia, 1,076,800 people overall left (just crossed the border but the purpose of the trip is unknown) the country in the three years. It should be clarified that crossing the border does not mean that the passenger left the country and definitely emigrated. It means nothing more than crossing the border and it may have also happened that the same person returned on the next flight back.

This number doesn’t, however, represent the migration rate. According to the same statistics, 1,019,600 citizens had also returned (crossed the border in the opposite direction) to the country in the same three years.

The RA registers of arrivals and departures, conducted at border checkpoints 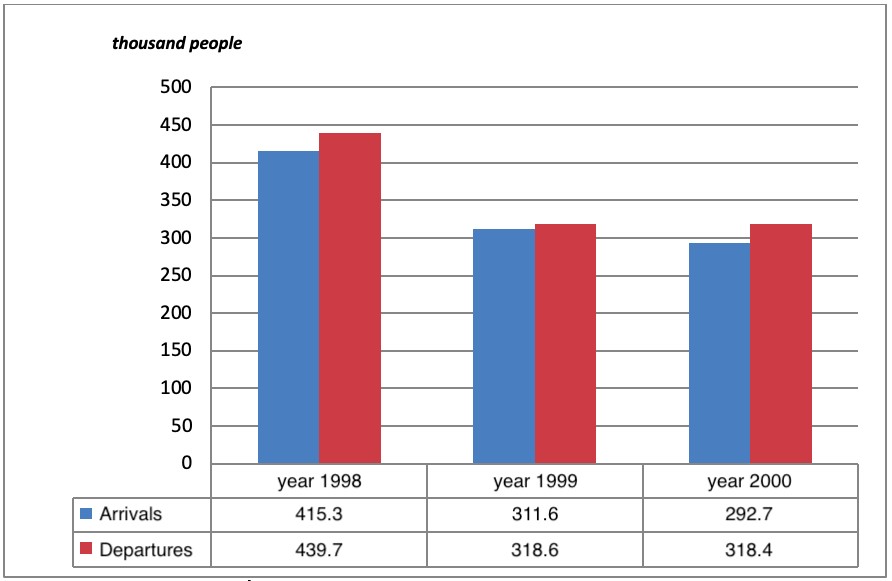 Source: General Department of Civil Aviation of the Republic of Armenia

The Statistical Committee replied to our inquiries, saying that the border checkpoint registers of arrivals and departures do not represent the emigration or immigration data.

As the Statistical Committee stated, according to the criteria of the UN International’s Migration Standards, an individual is considered a long-term migrant if they have left their country of permanent residence for a minimum of one year (12 months). According to the international benchmarks, those who are missing from their country for 3 months or less are not considered migrants at all.

It is important to mention that the data was collected only from aerial travel. Terrestrial travel has been left out of the statistics. The reason, as we were told by the National Statistical Service (NSS) Head of Population Census and Demography Division, Karine Kuyumjyan, is that the mass majority of the transportation of citizens outside of the country’s borders was conducted by air.

Media.am and FactCheck.ge found data sheets on the Statistical Committee’s electronic platform: armstat.am, which the Committee refers to as the migration balance in the country. The same information was provided to us by the Statistical Committee itself. Despite the imperfect methodology used in those years, the state considers these data to be official since there is no alternative, more accurate data. 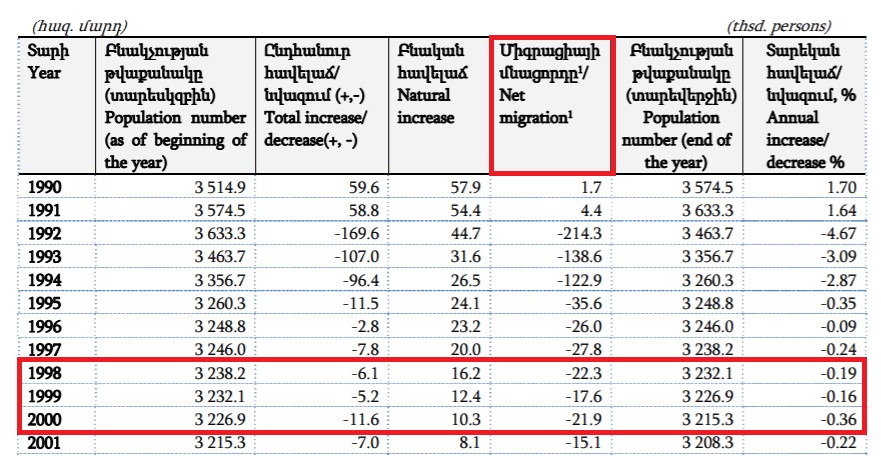 The data shows that during the first three years of Kocharyan’s presidency, the net migration balance of Armenia was over 61,800 people: that many people out of those who left the country can be considered long-term migrants.

It is worth noting that a reevaluation of the data happened after the census of 2001. As we were told by Karine Kuyumjan, before 2001, the Statistical Committee used the data from the Passport and Visa Department, controlled by the Police of the RA, to calculate statistics about migration. This means that before 2001, the data of the people being listed in or out of the registries of the Passport and Visa Department was used as a means to find how much migration was taking place in the country.

The 1998-1999 census and the Passport Department registries show that the difference between the people who got enlisted and written out of the official registries was 600 thousand. However, this number is somewhat misrepresentative. Many citizens simply did not register in the Passport and Visa Department to notify the authorities about their arrival to the RA.

After the census of 2001, the Statistical Committee replaced this method and started using the statistics from sample surveys to conduct their calculations more accurately. They also reevaluated the reliability of the data provided by the Police of the RA from the Passport and Visa Department registers.

As a final note, there have not been proper records that would permit us to measure the emigration rates of the years 1998-2000 with high accuracy, as the available data is incomplete. If that data is, nevertheless, used to calculate the migration balance, it is necessary to consider how many people returned to the country, as well as how many left. Migration data that are solely based on the number of people emigrating are manipulative. It is important to mention the other side of the statistics too.