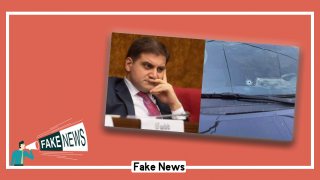 Disinformation: Shirinyan-Babajanyan Alliance Announced That the Shooter is From Their Alliance

Disinformation: Shirinyan-Babajanyan Alliance Announced That the Shooter is From Their Alliance

On June 20, the day of the Parliamentary Snap Elections, there were gunshots fired at MP candidate Arman Babajanyan’s car. Several hours after the information was released, misinformation started to spread online, claiming that according to the Babajanyan-Shirinyan Alliance, the shooter was one of the members of their alliance.

Arman Babajanyan denied having made any claim of this sort and that the viral information about the alliance making this announcement had no solid evidence.

Some social media pages and web pages announced that the Shirinyan-Babajanyan Alliance has claimed to have disclosed the identity of the individual who fired at Arman Babajanyan’s vehicle.

Media.am and Factcheck.ge could not find an announcement similar to this. We contacted Arman Babajanyan, who said that the alliance has never made such an announcement.

Babajanyan added that a fake letter containing the same information was being circulated, allegedly on his behalf: “There is no such thing. I have not sent a letter like that to anyone. It is a letter created by some well-known circles and sent to the press, and it has no relation to reality,” Babajanyan said.

Media websites, for example, armlur.am, have made direct quotations from the letter referred by Babajanyan.

Therefore, the news that according to the Babajanyan-Shirinyan Alliance, the shooter of Arman Babajanyan’s car was one of the members of their alliance is false; the alliance has made no such claim.