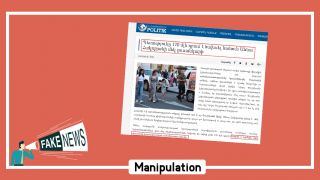 This information was manipulative: in the same article, the website declared that the celebration dedicated to Children's Day (not Anna Hakobyan’s picture), cost that much money. This celebration, where Hakobyan’s photo was taken, was organized by a private company, while the amount of budget money politik.am mentions is 11 times higher than what Yerevan municipality provided to the celebrations that were organized with the expenses from the municipality budget on the Children’s Day.

Moreover, politik.am wrongly claimed it is the first time that Children’s Day is celebrated with "such splendor" under Pashinyan’s government”. The website also made a manipulative claim about prime minister Pashinyan celebrating his birthday in Paris; in reality, Pashinyan was there with an official visit.

170 Million Drams Was Spent to Organize the Celebration

Politik.am cited an unnamed source, writing that “the authorities have, according to our information, spent more than 170 million drams for Anna Hakobyan to have taken a photo in public while standing on the Republic Square". In the sentence which follows, however, the author also notes that those expenses were made for the “organizing celebration” (not Hakobyan’s picture). 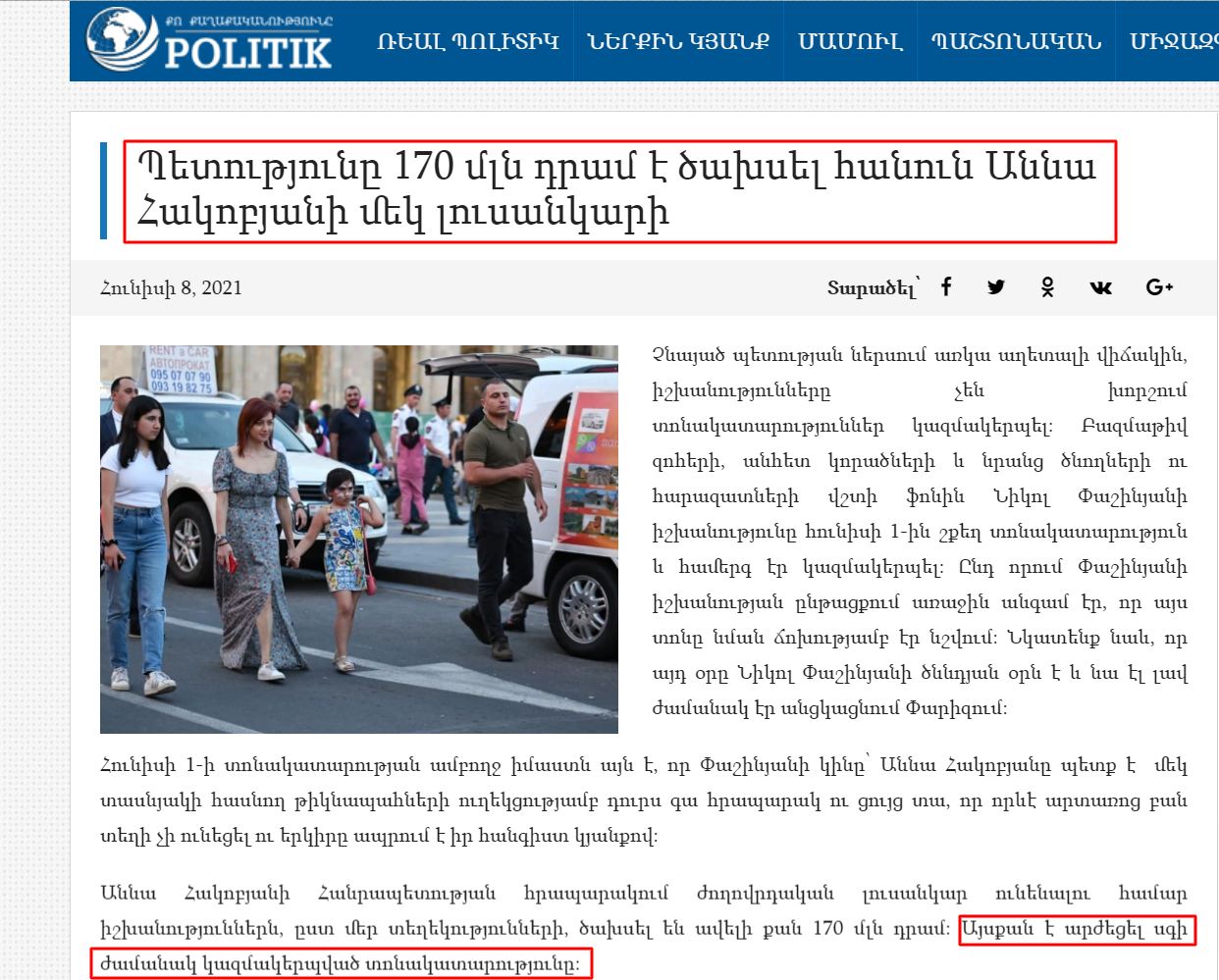 The headline distorts the context: as if the single picture of the prime minister’s wife cost 170 million drams, which can therefore mislead the readers.

Moreover, Yerevan Municipality told media.am and factcheck.ge that they had not provided public money for the concert on the Republic Square. That concert was organized by a private Bureau LTD («Բյուրո» ՍՊԸ).

We were not able to receive information from Bureau LTD regarding the costs of the concert organized by them.

The information about the budget of the celebration is not the only manipulation in the politik.am article. The article also includes a claim that “this is the first time during Pashinyan’s government that the ceremony was organized in so much splendor.”

Throughout the years, there have been many mass events organized annually on Children’s Day in Armenia.

Factcheck.ge and media.am requested information regarding the amount of money provided by Yerevan municipality for the June 1 celebrations in 2018, 2019, and 2021 (in 2020 no mass events were organised due to Covid-19 pandemic).

Funds provided by Yerevan municipality for June 1 celebrations, in Armenian drams and US dollars

This year on June 1, concerts have been held in the Freedom and Republic Squares in Yerevan, and exhibitions, receptions as well as other events have been organized. A program like this, however, is not exceptional for this annual celebration. In 2019, various events took place on June 1; for example, a park complex was opened. Just like this year, in 2019 too the prime minister’s wife Anna Hakobyan participated in the celebrations: her foundation had prepared a support program for the children from the villages close to the borders and Karabakh. A concert at Freedom Square, fireworks, and other festivities took place in 2018 as well, when Pashinyan was already the prime minister.

Therefore, the claim about Children’s Day being celebrated with "such splendor" for the first time under Pashinyan’s government, is manipulative. Slightly bigger amount was allocated for the celebrations from Yerevan municipal budget in 2019 than in 2021. Various mass events were held in all years of Pashinyan’s rule, except for 2020, when Covid-19 restrictions were in force.

Pashinyan’s Visit to Paris Not Personal but Official

“That day is Nikol Pashinyan’s birthday, and he too was having a good time in Paris”, wrote politik.am, forming an impression that Pashinyan was in France to celebrate his birthday.

Pashinyan’s birthday is indeed on June 1 and it coincides with Children's Day. Furthermore, he was indeed in France on that day. However, the goal of his visit was not to celebrate a birthday. It was an official visit, during which Pashinyan met with the President of France Emmanuel Macron, Mayor of Paris Anne Hidalgo, and other officials. On the next day, June 2, Pashinyan had to depart to Brussels for a meeting with the President of the European Council Charles Michel.

Thus politik.am made three manipulative assertions in one article about the celebrations on June 1.

In the headline, the website claimed that the state spent 170 million drams for a single photograph of Anna Hakobyan on Republic Square. However, in the article politik.am clarified that this was the cost of the organized celebration - not one photograph. Moreover, Yerevan municipality budget had allocated only 15 million drams for the celebrations it organized (including a big concert of Freedom Square). Politik.am was also incorrectly claiming that June 1 had never been celebrated with “such splendor” under Pashinyan’s rule. And finally, the website manipulated the information regarding Pashinyan’s visit to Paris, saying that he was celebrating a birthday there, while in reality he held official visits.