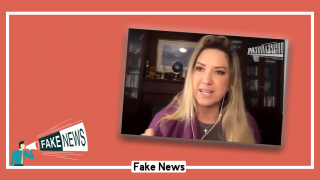 Conspiracy Theory: Vaccines Against COVID-19 Will Turn People Into Cyborgs

Conspiracy Theory: Vaccines Against COVID-19 Will Turn People Into Cyborgs

Facebook user Hrayr Kostanyan shared a video in which an American woman named Carrie Madej, who introduced herself as a doctor, presented an anti-vaccine conspiracy theory. She claimed that there is no pandemic and that nanobots are inserted into people through vaccines to read their thoughts and manipulate them.

The video is not new. It has spread to different countries. The allegations in the video are already checked and debunked. Despite that, the video was viewed more than 18,000 times on Hrayr Kostanyan's page as of July 13.

Who is Carrie Madej?

Carrie Madej introduces herself as a doctor and a medical lecturer who has been researching vaccines for many years. But in reality, Madej is an osteopath, meaning she performs osteopathy: a type of alternative medicine without a scientific basis. By manipulating scientific data, Madej made several false claims in the mentioned video.

False Claims - From the Non-Existence of the Pandemic to Cyborgs

There were a whole number of false and manipulative allegations in the video. Here are some of them:

The myth about vaccines causing infertility is widespread, but it has no scientific evidence. World Health Organization experts say that “there is no way in which they could interfere with the functioning of the reproductive organs in either men or women.” British Fertility Society and the UK Association of Reproductive and Clinical Scientists also point out that there is no scientific evidence or theoretical reason to suppose that Covid-19 vaccines affect fertility in women or men.

2.There is no pandemic; they are just scaring people: mortality rates have not increased worldwide.

This statement is also wrong. Coronavirus infection has spread across the globe, which is why we are talking about a global pandemic. The number of deaths due to the virus has exceeded 4 million worldwide and 4,500 in Armenia as of July 14. In 2020, due to both the war and the epidemic, Armenia had the highest mortality rate since the 1988 earthquake.

3.Vaccines contain luciferin, which makes it possible to verify if one is vaccinated.

Carrie Madej noted that coronavirus vaccines contain luciferin - a light emitting component found, for example, in some bioluminescent organisms such as firefly, some fungi, etc.

According to Madej, the content of luciferin in the bodies of vaccinated people can be tracked with a mobile application. This data is used to determine whether one has been vaccinated or not.

4. Vaccines implant nanobots in humans, turning them into cyborgs.

The conspiracy theory of implanting a "chip" or another robotic particle in humans through vaccines and controlling them through this method became widespread during the pandemic. However, as we have already mentioned, the components of the vaccines are publicly visible; there are no "chips" or "nanobots" in them. Madej's claims that these particles can be used to read people's minds and track them are baseless.

Thus, in the 26-minute video, osteopath Carrie Madej makes several statements that do not correspond to reality and in one way or another, reinforce the known conspiracy theories about Covid-19.