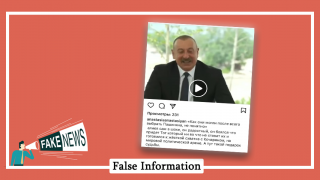 At the end of June, a few days after the Armenian snap elections, a video of Azerbaijani President Ilham Aliyev's speech where he was allegedly mocking the results of the elections started to spread across the Armenian Facebook community.

The video gathered tens of thousands of views (see examples: link 1, link 2, link 3). It was also shared on Instagram.

However, the video was old when it started to spread in June. The Armenian users also manipulated its content.

The Video was Old

The Armenian users who published the video in June claimed that Aliyev was sharing his satisfaction with the results of the snap elections. He was, according to them, happy to have the weaker opponent, Nikol Pashinyan, instead of the more powerful candidate, Robert Kocharyan, as the PM of Armenia.

In reality, the video of the speech was taken about a month before the snap elections, when Aliyev visited the Aghdam region. By watching Aliyev's speech in Aghdam, it becomes clear that the two videos are from the same gathering.

The video that Armenians started sharing in June was already on Azerbaijani social media in May (link 1, link 2, link 3).

The video was mistranslated in Armenian posts: "How could they have chosen Pashinyan after all of this?" An Instagram user allegedly quotes Aliyev.

The President of Azerbaijan did not make this statement. In the video, Aliyev talks about Armenia's "capitulation." He says that he does not know which corner of the trilateral document Pashinyan signed in November. There is no reference to the results of the snap elections.

Thus, this video was old when it started spreading in June․ The event happened in May; therefore, Aliyev could not discuss the results of snap elections from a month later. Furthermore, the Azerbaijani president did not make the statement ascribed to him by the Armenian users.