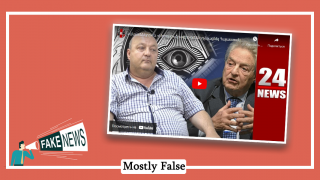 On July 12, the website 24news.am published an interview with Grigor Grigoryan, President of the Union of Karabakh War Veterans. In the interview, Grigoryan voiced a conspiracy theory about George Soros and the plan to destroy Armenia.

An Interview About the Army Still Talks Soros

The 21-minute-long interview mainly discussed the problems of the Armenian army. Only during the last two minutes was Grigor Grigoryan making allegations about a conspiracy to destroy Armenia. Although this topic took up a small section of the interview, 24news.am used it in the headline: "the ‘Freemasons’ and ‘Soros’ plan to destroy Armenia, the government serves their interests."

In the accompanying article, the website repeated this phrase as a quote from Grigoryan. It was an edited quote, as in reality Grigoryan said the following: "There is, in my opinion, a quest to destroy Armenia in the international world. The Turks are carrying out this quest, but behind it stand the Freemasons, that is my opinion, and the Soros offices. Whichever country Soros enters, that country goes to ruins." As an example of countries "ruined" by Soros, Grigoryan brings up Ukraine, Yugoslavia, and Georgia.

In response to the journalist's clarifying question, Grigoryan repeated that Soros is trying to destroy Armenia, which serves mainly Israel's interests.

The Conspiracy Theory is Unfounded

It is not clear what Grigoryan meant when he spoke of "ruined" countries and how he defines the term.

However, the countries listed by Grigoryan have one thing in common; all three have gone through military conflicts. Yugoslavia ceased to exist while Georgia and Ukraine lost territories. But these three conflicts arose and developed due to complex geopolitical events, not a maneuver of one or a group of wealthy individuals. Therefore, Grigoryan’s claim has no basis in fact and constitutes a false information from the genre of conspiracy theories, which explains events as a secret work of individuals or groups and present an implausible conclusion.

George Soros is a wealthy businessman and philanthropist. The Open Society Foundations (OSF) that he has established have been funding programs promoting democratization in various countries, including Armenia. Starting from 1998, OSF has been supporting Armenian civil society (organizations such as Transparency International, Public Journalism Club, Coalition to Stop Violence Against Women, Helsinki Citizens' Assembly - Vanadzor) public schools, universities, the media, etc. Information on the initiatives funded by OSF in Armenia is available on their website. OSF is banned in authoritarian countries such as Russia, Azerbaijan, and Turkey.