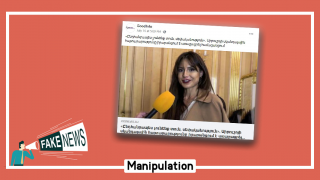 Manipulation: Kocharyan's Daughter-in-Law Says They Have No House or Property

Manipulation: Kocharyan's Daughter-in-Law Says They Have No House or Property

On July 16, the GoodInfo clickbait page shared information about the singer and former president Robert Kocharyan's daughter-in-law Sirusho while putting it out of context.

The article with Sirusho’s photo and a sensational headline about her was not related to the singer at all.

The July 16 post on GoodInfo used Sirusho's photo, and the headline read: "We Have No House and No Property: Sirusho's Shocking Statement Caused a Commotion on the Internet." As of July 21, the post received over 340 likes and 460 comments.

This announcement was indeed made by Sirusho, but she said it a few years ago. In November 2019, the singer presented her jewelry collection in the United States. In an interview with Voice of America during the event, Sirusho said: "I do not live here, we do not have a house or property at all". She means property in the USA (in the video from 5:18).

This phrase later appeared in the headlines of the Armenian press. For example, the Yelaket video with more than 76,000 views was titled "We have no house, no property at all: Sirusho." The title did not mention that the statement referred to Sirusho and hence former President Kocharyan's family members not having property in the United States.

In July 2021, the clickbait page GoodInfo used this headline again. However, the information in the article was in no way related to Sirusho. Instead, the article was a speech by a woman whose name was not mentioned and who complained of her son, saying that the latter was already 25 years old. Sirusho's children are underaged․ Her first child was born in 2014. The content of GoodInfo's Sirusho story has found its way on other clickbait websites too and has been spreading at least for months with various pictures and contexts attached to it (see, for example, publications from June 2020 or March 2021).

Therefore, Goodinfo spread parly false information about Sirusho: it used a headline that missed context and coupled Sirusho’s photos with an article which was not related to her.