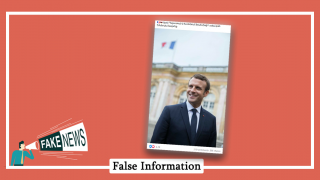 False news: Macron arrived in Armenia on July 18 and 19

False news: Macron arrived in Armenia on July 18 and 19

On July 18 and 19, several Facebook pages wrote that French President Emanuel Macron was going to arrive in Armenia on that day.

This information was incorrect. Macron is expected to visit Armenia in the near future, but the date of the visit has not been announced yet.

"French President Emanuel Macron arrives in Armenia today", posts with such claim spread widely on Facebook. For example, this post of the "Դուխով" page received over 4,200 likes. Another post of similar content on a page titled "Новости Армении" was liked more than 200 times.

The news started spreading a few days after Prime Minister Nikol Pashinyan's meeting with the French Ambassador to Armenia, Jonathan Lacôte. During the meeting, Pashinyan noted that we “expect French President Emmanuel Macron’s visit to our country in the near future." Ambassador Lacôte stated that active work is underway to organize Emmanuel Macron’s upcoming visit to Armenia. The officials, however, did not specify when this visit would take place.

As of July 20, Macron's visit to Armenia has not occured. The date of the expected visit is not known yet.