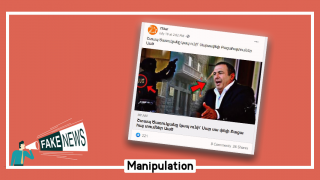 Manipulation: Is Tsarukyan Linked to the Terrible Discovery?

Manipulation: Is Tsarukyan Linked to the Terrible Discovery?

On July 19, the 7Star Facebook page published a post titled "Urgent Tsarukyan Has to Do with Terrible Discoveries NSS [National Security Service]?" The users who clicked on this headline got forwarded to a video that did not mention the businessman and the head of the Prosperous Armenia political party Gagik Tsarukyan.

7Star is a clickbait page. The post created on July 19 forwarded the readers to ikf.am website called "What's on Facebook". This site, in its turn, displayed the video from “ArmNkr news" YouTube channel, which has 118,000 subscribers.

Although the photo of Gagik Tsarukyan was on the cover of the video, and the title promised a sensational story involving Tsarukyan, there was no mention of him in the video itself. Instead, the video talked about various Facebook posts and news spread on other platforms.

Referring to 1lurer.am, the video told about the discovery of an illegal casino in Yerevan. Such a case did take place, but not by the National Security Service (NSS), as mentioned in the title. It was the police who reported about the casino. The police announced the discovery on July 19. In the video the narrator read the text published on the police website, in which there was no mention of Gagik Tsarukyan.

Gagik Tsarukyan is a well-known businessman and politician. Several casinos are associated with his name, including the famous "Shangri La" casino in Armenia. This fact, along with Tsarukyan's name and his photo in the post, could have created a false opinion among the readers that the discovery was related to an illegal business involving Tsarukyan. However, the law enforcement bodies did not make this implication.