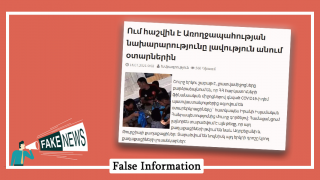 False Information: Azerbaijani Citizens Come to Armenia to Get Vaccinated

False Information: Azerbaijani Citizens Come to Armenia to Get Vaccinated

On July 14, Pastark.am website wrote that Azerbaijani citizens come to Armenia to get vaccinated. The website also claimed that foreigners could receive Sputnik-V in Armenia. Both claims, however, were wrong.

On July 15, Armenia changed the procedure for vaccinating foreign citizens. Before that, anyone could get vaccinated in Armenia simply by presenting their passport; now, however, foreigners have to spend at least ten days in the country to be eligible for vaccination.

The day before these changes came into force, on July 14, Pastark.am website touched upon the issue of foreigners being vaccinated in Armenia. The article the website published was shared on various Facebook groups by Marina Khachatryan, a former member of the Yerevan Council of Elders and a neurosurgeon advocating anti-vaccination conspiracy theories (link 1, link 2, link 3). The article made several wrong statements.

Pastark.am repeated the thesis "widely spread on the Internet" that among the foreigners vaccinated in Armenia there are also citizens of Azerbaijan and Turkey. The statement is wrong, at least when it comes to the claim about Azerbaijani citizens arriving in Armenia.

Vaccinations in Armenia have been ongoing for three months, since April 13. Starting at the end of April, Armenia allows vaccination for foreigners too. In response to Media.am's and Factcheck.ge's inquiry, the National Security Service informed that no Azerbaijani citizens have arrived in the Republic of Armenia in the last three months.

Azerbaijan and Turkey are the leaders in the region in terms of the number of vaccinated. Several types of vaccines are available in both countries. More than 4.5 million doses of vaccine have already been administered in Azerbaijan.

At the same time, the vaccination process is slower in Iran. The country has banned Western vaccines. As of July 19, only 7% of the population in Iran received at least one shot of COVID-19 vaccine. Thousands of Iranian citizens travel to Armenia to get vaccinated.

Pastark.am wrote that foreigners "have the same rights as Armenian citizens to be vaccinated with the Sputnik V vaccine."

Vaccination of foreigners has been allowed in Armenia starting from April 23. However, foreign nationals can only receive the AstraZeneca vaccine. Hripsime Khachatryan, the spokesperson to the Ministry of Healthcare of Armenia, told Media.am and Factcheck.ge that both before and after the July 15 changes, foreigners in Armenia could get vaccinated only with AstraZeneca vaccine.