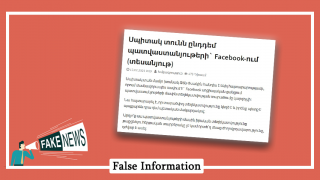 False: The White House Has Banned the Vaccine-Related Information

False: The White House Has Banned the Vaccine-Related Information

On July 17 Pastark.am website claimed that the US government banned information about coronavirus vaccines on Facebook. This claim was false: the US authorities expressed concern only about misinformation on vaccines.

Psaki did not say anything about banning information regarding vaccines on social networks. Her speech referred to the spreading of misinformation about vaccines, that is, information with false or misleading content.

The White House has been increasingly vocal in its criticism of social media platforms’ handling of misinformation. On July 17, US President Joe Biden criticized social networks for not preventing the spread of misinformation about vaccines. According to him, the epidemic in the United States exists only among the unvaccinated currently.

In response to the criticism from the White House Facebook stated that the company had already removed more than 18 million pieces of Covid misinformation. Facebook also noted that the company would "not be distracted by accusations which aren't supported by the facts".